‘The Protectors’: Lani Bruce on why she joined #leardblockade 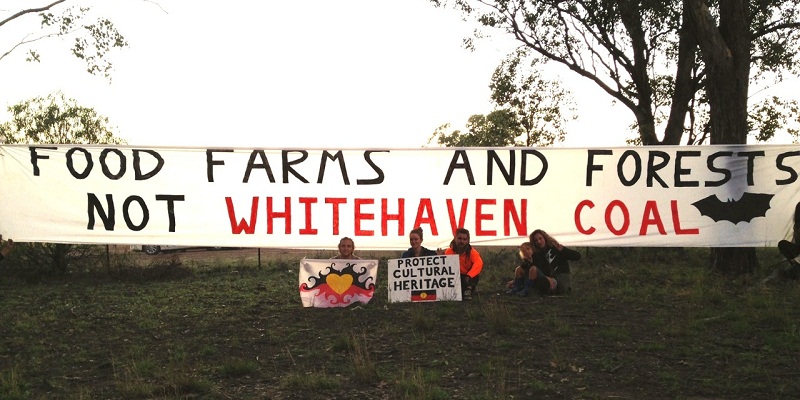 Lani Bruce is a qualified science teacher and mother of two boys from Sydney. A former environmental consultant, she is a proud advocate for the conservation of Australia’s forests. Lani joins peaceful protests and uses social media to raise awareness, and hopes to encourage other mothers and fathers to take action to protect Australia’s forests from mining interests. Lani is planning to start a family group for Act Up 4.

I am the mother of two sons and am qualified to teach science in secondary schools. My level of education and understanding of current local issues has developed since the year 2000 – when I voted for John Howard (a very hard thing to admit to) – till today, when I feel that the two major political parties are working for corporations, and not for the people of today or future generations.

On Monday, March 31, 2014, I proudly supported the mass walk-in at Whitehaven’s Maules Creek mine with my partner and 5-year-old son. I attended the protest to show my support for those I call ‘The Protectors’ – a group who, in my opinion, do not fit under any socially constructed labels. They deserve respect and support.

It was challenging – my family had not camped together before and I was anxious my son would miss the comfort of home. As a nurturing mother I want to ensure my children do not miss out on anything, including comfort and hygiene, yet I like to challenge myself. That morning my son made me very proud. “It’s still dark, mummy. Where are we going?” he asked, when I woke him at 4am. I told him we were going on an adventure to save the forest. He smiled at me understandingly, and that made it worth it – it is his future I am fighting for.

We were told that despite 300 submissions against the mine’s development, the project was approved. I do not understand how immediate financial gain can be a justification during a time when action on climate change needs to be taken.

We drove in a convoy of cars to act as a decoy to the main action. I didn’t feel it was right to take my son onto the mine site, where he might have witnessed people being arrested. The main action ended in over 80 arrests and stopped work at the site for the entire day.

I respect the land that sustains my fellow Australians, but can also sense its fragility. I will do whatever I have to do to protect this land from the ecocide that is occurring in north-west NSW. If that means being arrested and limiting my teaching career, then I will.

Australia is in a position where wind, solar, and other renewable energy sources could provide energy to homes and jobs forever. The Australian economy could take advantage of our educated workforce to prosper. Authentic values and science via mainstream media channels could promote a revolutionary trend to rebalance society.

I have always had an interest in nature and a preference for outdoor spaces, and maybe that makes me different to whoever may be reading this. For me the forest holds a certain sort of magic that words cannot describe. I feel a sense of shame when I see what is happening in this invaluable piece of natural forest. I do not expect everyone to agree on everything – I just want people to agree on one thing; that fossil fuel companies should stop digging up our land and cultural heritage for the sake of capitalist values. Camps like the #leardblockade are for everyone who believes in working together on the issues they feel strongly about.

A teacher gets asked many questions, and can go to a book and find the answer. My job as a teacher is to help kids understand the world in which we live, and I really enjoy doing that. When a student expresses dislike for science I find it hard to understand. How can it not fascinate and inspire everyone? Science explains what is happening around us – the amazing truth about life, energy and matter. In a generation which relies on technology for survival it’s a shame such negative attitudes exist.

I firmly believe that everyone has the right to choose what they fancy to do, as long as it does not adversely affect others. Some people dream of a waterfront home, a BMW and a boat. They could work hard to get it and people would look up to those people. They would be labelled a ‘hard worker’, ‘determined’, and people would slap them on the back with envy.

Then there is someone like me – happy with a modest house, car and canoe, and wanting to explore and admire the little that remains of Australia’s forests (roughly three per cent of what we started with).

I work hard to stop work on the mine sites with peaceful protests and I raise awareness through social media. People tend to label me as a ‘communist’, ‘hippie’ or ‘protester’. I don’t get a slap on the back and envious stares. But that is not what I do it for – I do it for myself and for my children – and to me that is all that matters. I feel blessed to have been part of the #leardblockade.