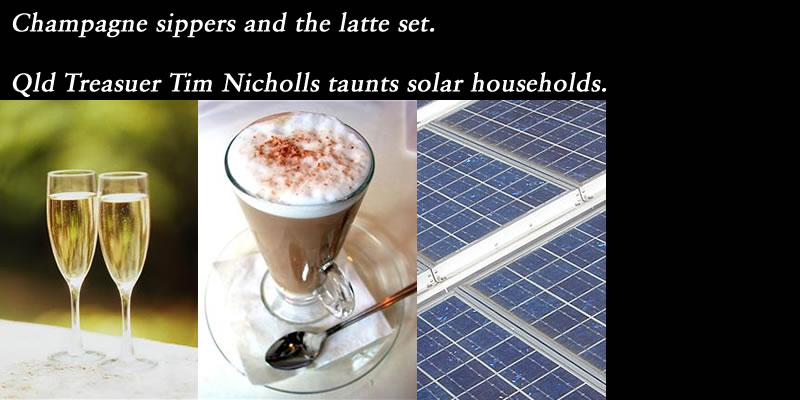 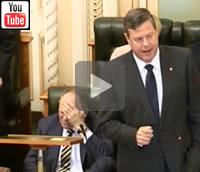 Queensland Treasurer Tim Nicholls has labeled people who took advantage of the Bligh Government’s solar rebate scheme as “champagne sippers” and being part of the “latte set”.

In another “blame Labor” session of question time in the Queensland parliament, Nicholls turned on solar households labeling the scheme “middle class welfare”.

In response to an interjection by Premier Campbell Newman, Nicholls blamed Labor for the cost of the feed-in tariff component.

“So those people who were doing it toughest and who did not have the money to be able to put solar panels on were paying for the middle class welfare that Labor was putting out there for the champagne sippers and the latte set with whom they hang around all the time in terms of making themselves feel good, but making the rest of Queenslanders pay for it,” he told the house.

Pre-Newman Government, Queensland households that took up the scheme by investing in the installation of solar panels were rewarded with a 44 cent feed in tariff from the government owned power suppliers for energy they put back into the grid. Around 205,000 households signed on for the scheme.

However, after coming to power, the Newman Government slashed the rebate for 50,000 households down to 8 cents based on the period in which they had signed on. Most recently, the 8 cent feed in tariff was abandoned completely, leaving those households to bargain on a price with their suppliers.

Along with the carbon tax, the solar feed-in tariff has long been blamed by the Newman Government for the rising cost of power prices in Queensland. However, the Queensland Competition Authority has repeatedly shown that the major cost in power price rises is in the network. Recently announced electricity price rises show Queenslanders will pay an extra $200 a year with a rise of 13.6 per cent.

The rapid uptake in solar power across Australia has resulted in homeowners creating clean energy power stations in cities and towns across the nation.

Treasurer Tim Nicholls’ Queensland seat of Clayfield is part of the federal seat of Lilley. Data shows the area has 8,506 homes powered by solar, 13.66 per cent. 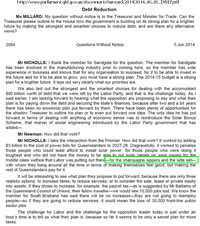 An extract of the full speech appears left.

For the full Hansard transcript of today’s events, click on; Record of Proceedings (Hansard) 05 Jun 2014.

@PSyvret @Qldaah @TimNichollsMP With now about 1,200,000 rooftop solar PV systems in Australia this gaffe might not win LNP too many votes.

@vanbadham @GrahamPerrettMP @Qldaah Instead of feed in tariffs we cld have a solar “levy” – offset axing carbon price? #youknowitmakessense