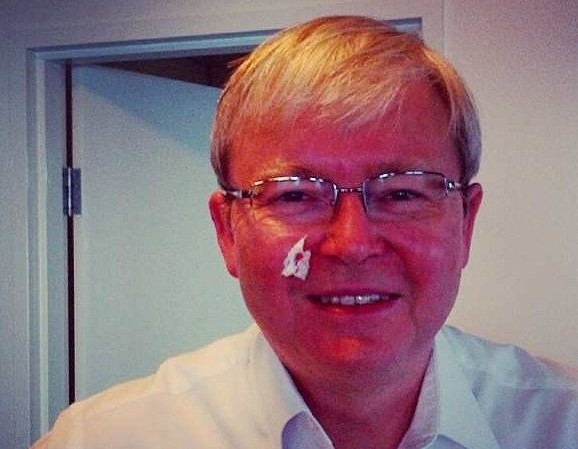 In the three short weeks since Kevin Rudd wrested the ALP leadership and title of Prime Minister from Julia Gillard, we’ve all been catapulted (some kicking and screaming) into a parallel universe. That of Kevin’s.

National Party Senator Barnaby Joyce recently speculated what it was like to get inside Kevin’s head, suggesting to Sky News it could be “a scary place to go”.

What we do know is that there’s a three year period between 2010 and 2013 that Kevin Rudd, like Opposition Leader Tony Abbott’s take on the South Australian town of Whyalla following the introduction of the price on carbon, has “wiped off the map”.

In his first address following the leadership ballot, Rudd paid tribute to his immediate predecessor’s legacy – but not for the first female Prime Minister’s holding together of a minority government in introducing a raft of big policy ticket items – like the National Disability Insurance Scheme, the Gonski reforms, and the policy which didn’t wipe Whyalla off the map (but one which will forever cement Craig Emerson in the embarrassingly amusing political footage stakes).

No, the best Kevin Rudd could cough up to acknowledge Julia Gillard’s political legacy was her implementation of the Fair Work Act, and in the education policies she introduced – not, ahem, as Prime Minister, but as Rudd’s Deputy leader.

Last week at the National Press Club, journalists were ‘treated’ to the spectacle of Kevin Rudd’s ‘quaint’ ability to debate himself.

Opposition leader Tony Abbott had been invited to debate the economy, but refused to show up after labelling it a “stunt” – said the man who dons a hardhat and a fluro vest for a photo opportunity a few times a week). Never mind, as the ABC’s Annabel Crabb reported,  “it turned out fine … because the PM – a practised self-interrogator – simply debated himself for an hour or so, and showed some bar charts.”

Crabb also noted Rudd’s black hole memory in terms of the period between mid 2010 and mid 2013:

“He gave a potted history of his past speeches and remarks on economic policy, from the moment he was “elected prime minister” in 2007 all the way through the global financial crisis until 2010. Of the period between 2010 and 2013, he did not speak.”

If the last three weeks are anything to go by, expect to hear a lot more of Kevin Rudd 2.0’s ‘selective’ memory recollection. And boldly so.

Indeed he used his first parliamentary speech as Prime Minister to call for MPs to be a ”little kinder and gentler with each other” – in other words, to presumably be the exact opposite to how Kevin himself has behaved for the now-missing years of mid 2010-2013.

And last week took the furious-frickin-irony cake, with his press conference announcement arguing for changes to how the ALP leadership position is decided.

Rudd, hand on his heart, was able to present an argument that the sort of sustained treachery he himself has engaged in over the last three years (yep, you guessed which three years), should never happen again. You see, it seems Kevin Rudd wants to be Prime Minister FOREVER.

In other words, if the changes are agreed to, it would almost guarantee that any future elected leader of the ALP who wins government could not be replaced until they lose government.

As Peter Van Onselen wrote (in one of the few critical pieces on the proposal) in the Australian newspaper:

“It would also reduce the chances of succession planning in government. It could even create a scenario whereby a leader continued to serve as PM without the support of a majority of their colleagues: a staggeringly dysfunctional way to run a government. In short, the reform proposal touted by Kevin Rudd and meekly adopted by his cabinet colleagues earlier this week would create a virtual elected dictatorship whenever Labor was in office.”

While more democratic power to everyday members of the ALP should be encouraged, and that of party reform in general, the proposal is hard to swallow given the person who has introduced it – the same person who has spent the last three years hellbent on destabilizing his own party to take back the leadership. And democratic reform is vastly different from what sounds creepily similar to the creation of an autocracy.

It’s also worth reflecting on history. Such a proposal in retrospect would mean the Keating Government may never have existed. It would also potentially mean the same for the Gillard Government – that our 112 year federal political history would still be entirely dominated by a succession male leaders.

During his announcement, Kevin Rudd said, “the mechanisms outlined in the proposal will prevent anyone from just wandering in, one day or one night, and saying “OK sunshine it’s over.””

Yes sunshine, the “new paradigm” of Kevin Rudd Rebooted has also seen a cringe-inducing resurgence in the hokey-dokey speak many of us thought we’d thankfully seen the last of in 2010 – thrown out with a good shake of the sauce bottle.

As Corrine Grant notes, Rudd’s latest “youf-speak” is using the term “selfie” in relation to a mobile phone picture. Last Sunday’sepisode of Insiders showed a cringe-worthy collection of Rudd-about-town embracing anyone and everyone with a mobile phone and exclaiming, “take a selfie!!”, “selfie, selfie!”. Someone. Please. Make. It. Stop. Or in Rudd-speak, please ask him kindly to “zip it”.

As women and men who relished the chance of having Australia’s first female prime minister, the last few weeks have been hard to digest. It’s not been assisted by articles like that of Labor ‘statesman’, ahem, Graham Richardson telling readers “Get over it, Girls” (and whenever Graham Richardson expresses an opinion on women, just check out this picture in the Monthly in response. One. Thousand. Words.).

The question lurking in the minds of many women and men since last month’s leadership change remains – and for many it represents the most wicked of choices – can people unite behind rewarding a man who indulged in three years of egomania-fuelled treachery, or instead opt to elect a staunchly conservative man, not as “invisible” as carbon dioxide, but possibly as dangerous?