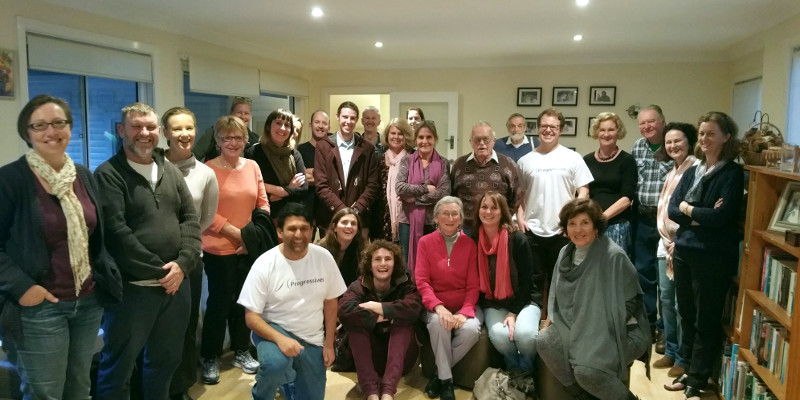 Welcome to the first ever Australian Progressives local hub meet-up.

A little bit of history is being made here today. Mark my words.

So, you might be asking, “What are we here for?” ‘What is it that we are trying to achieve?”

I could answer that by posing what many of you have said to me.

Put simply, you’ve been invited here to begin to change those perceptions. I for one, can hardly contain my optimism. I’ve always been a glass-half-full person, some would say naively so, but I think dreaming is important, and maybe, this dream is based on reality.

So, the first reason I decided to invite you here today was to create connections. To make us see there are plenty of us who care: who don’t like what we’re seeing in our society and we care enough, despite all our disheartedness, to turn up here on a Saturday afternoon and see what’s going on.

And when we look around the Northern Beaches, and I’m sure it is the same up along the lower north shore, what we see, are a hell of a lot of good people. You only need to check out the local paper to see that we do “community” well. Every day there is someone starting a new initiative to help someone in need, or to help the environment in some way. I’ve lived on the Northern Beaches my whole life, and what I see is a whole lot of people, regardless of their politics, (if they have any) being good people. I do believe the majority are trying to do their best for others on a personal level. They all love the environment too. I think that’s one thing you can say about people who live near the water, We are all environmentalists, it may be that some of the people just don’t know it yet.

So, among all these people doing good, somehow, politics has got lost along the way. It has become a dirty word, and that’s exactly how the politicians like it. They want people to be disengaged, they want people to feel hesitant about talking politics in company. They don’t want ordinary people to get involved, or to understand how things work. But politics is of and for the people. It shouldn’t be a dirty word. It is supposed to be the thing that acts in our interests, it is supposed to be the thing that makes sure we have a healthy planet, healthy oceans, that our cities are great places to live in, and that our communities function well.

…It is up to us to make politics something for the ordinary person again. It’s not about Tony Abbott, or Bronwyn Bishop, or Joe Hockey. Those people have become irrelevant. They hold a lot of power, but they are irrelevant to our communities and our people. We have to start from a different point.
You might want to know what led me to this point today? As many of you know, I’ve always been interested in politics. Like many of you, when I see injustice, when I see environmental vandalism, when I see the world’s most vulnerable being treated unfairly, with cruelty, and in a manner which contradicts treaties we have signed, and freedoms we have fought for, and when I see our political processes facilitating this, I do stand up. For most of my life, but especially the last few years, I’ve written letters, signed petitions, started fb groups, marched, met with MP’s, including our very own Tony Abbott. I’ve done whatever I could do to try to take my part in the democracy we live in, thinking, in my naïve manner, that it would have an impact. But as we’ve seen, things are not improving.
It has all just resulted in a sense of powerlessness.

Looking back, I can see a seed was planted in my brain back in 2004, when I read the book NOT HAPPY JOHN! by Margo Kingston, the Sydney Morning Herald journalist. It was a time when secrecy and deception were becoming entrenched in our political system. The Iraq War “weapons of mass destruction” and the Tampa “children overboard” were cases in point.

I was working in a book shop at Manly at the time and we invited Margo to come and speak about her book. I remember it was a cold weeknight. At the time, I had three small children, had overseas students living with us, was running our family business and working in the bookshop. As well as that, I was doing all the things a lot of Mums do. Helping out at the school, managing kids sports teams, getting involved in community things, you name it. I was flat out!

So I felt pretty good about myself making this huge effort to go out on a cold weeknight to hear Margo speak about her book. Now, I had been to a lot of author’s events and the one thing they all had in common was a sense of graciousness. They all seemed genuinely humbled that people had come to hear them talk. Not Margo! Margo was NOT HAPPY! (as her book would suggest) From the way she spoke to us, (and a few of you were there that night) you could have been forgiven for thinking the title of her book was “Not Happy, white, privileged North Shore types!” With a sub-title “ It’s not good enough to pat yourselves on the back for reading my book and coming to hear me speak: why don’t you get off your arses and DO something!”

So, finally, after 11 years, I’ve got my act together and I’m trying my best to do what Margo said! I’ve been gathering like-minded people for a couple of years now, not really knowing where we were headed, but knowing that there was strength in us all being connected. Then, last year, thanks to some wonderful young people, people who have worked incredibly hard and have been incredibly committed to fixing politics, and starting the process to make our country great again, The Australian Progressives were formed. I can hardly contain my optimism. I’ll let Vinay tell you more about that in a minute.

But can I just go back to Margo for a minute. Because when she said that about us getting off our arses, there was a friend of mine there, who must have felt pretty miffed. And I tell this story whenever anyone says to me, (and they say it all the time) ‘we’ll never get rid of Tony Abbott. It’s such a safe Liberal seat and everyone votes for him.” You see, my friend had got off her bum, three years earlier, in the 2001 election. She made the decision, despite having small children and a hectic life, to give up a fair chunk of her year to become the campaign manager for Dr Peter MacDonald, the very well- respected local GP, ex-state independent MP and ex- Manly Councillor. So, in this safe Liberal seat, the polls were neck and neck close to the election, and Abbott was getting worried, but then, as I’m sure many of you remember, Tampa happened. Asylum seekers were falsely accused by the Howard government of throwing their children overboard, and the polls turned overnight.

It could have been very different.

Ask yourself, is it any wonder this is a safe Liberal seat, when we have a whole generation who have known nothing other than Tony Abbott, and in the whole 20 years he has been our local member, only once has there been a serious contender for his seat. The other parties don’t contest it, not really. They might have a candidate, but they are not serious. When people go to vote, they only recognise one of the names. Now WE may not have voted for him, or Bronnie, or Hockey, as the case may be, and the same goes for those electorates, but just because we didn’t vote for them doesn’t mean we are not responsible. If no-one ever provides an alternative, how are the young people going to become engaged? How are all the people who don’t care about politics going to ever imagine something different? It’s up to us. It may take time, but I believe we can build an alternative. We have a responsibility to. 20 years is enough!

The Australian Progressives are about empowering people to once again be engaged with our political systems, to no longer feel disheartened, to re-energise. We want to do this from the ground up. We want our communities to be the ones that hold the power, not career politicians and global corporations.
How are we going to do that? This is where you come in. Imagine what sort of things you would like to change. You may be a political animal who can’t wait to get into an election campaign, you might be someone who prefers doing small things at a community level. What the Progressives can do for us totally depends on what we want and the energy and enthusiasm we have, (now that we are all connected), to make it happen. That’s what the little pink bit os cardboard are for. Please write your ideas, dreams big and small of how you think we can make a better society.

Before I invite Vinay, our founder, our President and chief dream-maker, let me leave with you with a quote from the famous anthopologist, Margaret Mead. I’m sure it’s one many of you are familiar with, in fact it is a favourite of our local environmental group, CCLF: but it is always so good to hear it on occasions such as this.

Never doubt that a small group of thoughtful, committed, citizens can change the world. Indeed, it is the only thing that ever has.”

Margo’s book can be found at https://independentaustralia.net/politics/politics-display/happy-margo-kingston-relaunches-still-not-happy-john,5044