Vanuatu, Australia and #CyclonePam: reaping the whirlwind from #climate change by @Takvera 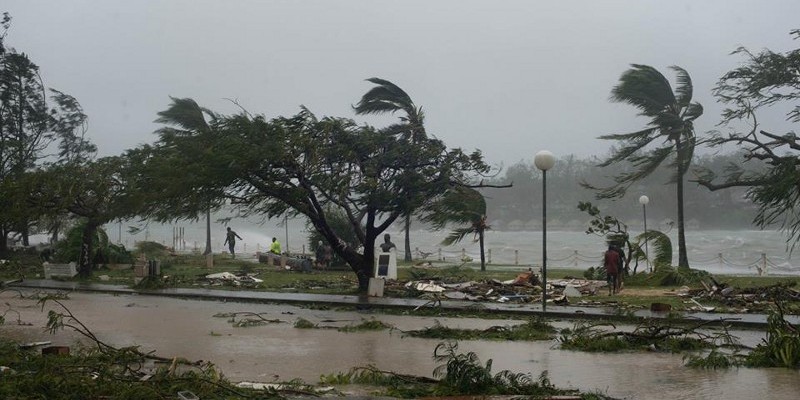 Vanuatu has suffered its worst disaster on record with the impact of Category 5 Tropical Cyclone Pam, with the President of Vanuatu blaming climate change for extreme weather (Guardian 16Mar2015). Australia has stepped up with an initial $5 million disaster relief package.

To put Australia’s monetary response into perspective: during the 2014 budget handed down by Australian Treasurer Joe Hockey, some $7.6 billion was cut from Foreign Aid. The Mid year Economic Financial Review at the end of 2014 slashed a further $3.7 billion from Foreign Aid.

Much of this budget was used for funding needed basic infrastructure, disaster reduction, climate adaptation and building community resilience programs in Pacific nations. We give money in the short term for initial disaster crisis management, but the reality is we are slashing long term financial foreign aid assistance to our Pacific Island neighbours that would help build community resilience and adaptation to climate impacts being felt now.

As a result of Cyclone Pam, several South Pacific nations were impacted. In Tuvalu the level of destruction from storm surge flooding caused the Government to issue a State of Emergency. Up to 45{17ac88c265afb328fa89088ab635a2a63864fdefdd7caa0964376053e8ea14b3} of the population, mostly from the outer isles, was displaced by storm surge flooding. Kiribati and the Solomon Islands also suffered from flooding caused by the storm.

But Vanuatu has suffered the worst. In Port Vila tens of thousands of people have been made homeless. About 90 per cent of the buildings in Port Vila, the capital, have been severely damaged or destroyed. There has been major destruction and disruption to communications and transport with roads and bridges washed away. Water and sewerage systems have also been impacted, increasing the risk of diseases from poor water quality and poor sanitation. Subsistence food crops are likely to have been wiped out. 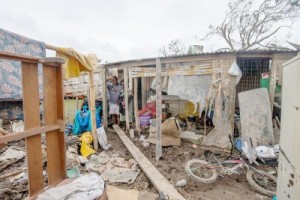 While initial assessments are from Port Vila, many of the more remote communities had buildings made from corrugated iron and timber: no match for Cyclone Pam’s wind gusts of up to 340 km/hr. Much more devastation and deaths are expected from more remote communities, especially Erramango and Tanna Islands which were in the direct path of the cyclone.

Still, the island nation prides itself on its disaster resilience, picking up the pieces and starting again. They have endured volcanic eruptions, earthquakes, and storms. Lots of storms. But nothing to rival the monster that was Cyclone Pam.

This time a large part of the nation has been heavily affected.

Aircraft carrying food, tarpaulins, water and medical supplies have already landed from New Zealand and Australia. But it will take substantial rebuilding work by a nation with little financial resources. 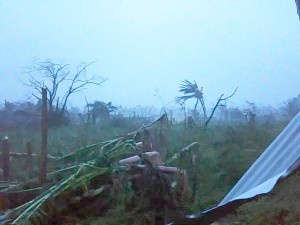 “Vanuatu is used to disasters but the indications are that Cyclone Pam has caused unprecedented damages…This is a major calamity for our country. Every year we lose 6{17ac88c265afb328fa89088ab635a2a63864fdefdd7caa0964376053e8ea14b3} of our GDP to disasters. This cyclone is a huge setback for the country’s development. It will have severe impacts for all sectors of economic activity including tourism, agriculture and manufacturing. The country is already threatened by coastal erosion and rising sea levels in addition to five active volcanos and earthquakes. This is why I am attending this Conference and why Vanuatu wants to see a strong new framework on disaster risk reduction which will support us in tackling the drivers of disaster risk such as climate change.”

Reaping the whirlwind from carbon emissions

Vanuatu may be a paradise in the South Pacific with extremely low contribution to global carbon emissions, but it will reap the extreme weather whirlwind cost of the carbon emissions of the industrialised and developing world, including Australia’s heavy reliance on coal fired power and high per capita greenhouse gas emissions.

Climate scientists have for some time said that although cyclone frequency might decrease slightly, cyclone intensity would increase due to climate change. Fewer, but stronger.

Climate science blogger Greg Laden labeled this storm as ‘AGW Class Cyclone Pam’ on March 12 as it approached Vanuatu. He described it as: “a tropical cyclone of category 5 strength, but is churning over waters that have high temperatures at depth, a phenomenon we seem to be seeing more often lately, as a result of anthropogenic global warming. That is why I call it ‘AGW Class.’ Strong Category 5, deep heat enhanced. It is said that this is one of only 10 Category 5 storms recorded in the basin since good data are available.”

There are three important factors in how climate change is affecting the impact of tropical cyclones:

Sea Surface temperatures: Climate change increased Sea surface temperatures are driving high intensity storms. The oceans absorb 93 per cent of the heat uptake in the earth system. A huge inertial mass which can provide enormous energy to sustain and rapidly intensify these storms.

Increased water vapour capacity: As temperatures rise due to global warming it has been estimated that for every degree Celsius increase in atmospheric temperatures, the moisture carrying capacity will increase by about 6 per cent. Rainfall intensity was found to increase at a rate of between 5.9{17ac88c265afb328fa89088ab635a2a63864fdefdd7caa0964376053e8ea14b3} and 7.7{17ac88c265afb328fa89088ab635a2a63864fdefdd7caa0964376053e8ea14b3} for each degree of warming. One study found that with a 3 degree rise in temperatures a 24 per cent acceleration of the water cycle is possible. At present increase in temperatures over the last century there has been about 5 per cent increase in moisture carrying capacity.

Sea Level rise: As ocean waters warm they also suffer thermal expansion. This is a large proportion of present sea level rise, although the proportion from mountain glaciers and melting of the Greenland and Antarctic Ice Sheets is a growing proportion. Sea levels do not change equally around the world but vary with regional differences with a current global average of 3.2mm + /-0.4 mm/yr. For Vanuatu the regional rate is even higher: from 1997–2009 (12mm + /-1.5 mm/yr). When a storm comes along, the high wind speed pushes water before it as a storm surge building upon the year by year increase in sea level rise heights. This can make all the difference to coastal flooding and destruction of homes, agriculture, coastal erosion and fresh water lenses. A Cyclone like Pam has a substantial wave height and storm surge which can have a major deleterious impact on coastal settlements.

Put these all together and you have the monstrous storm like Cyclone Pam or Typhoon Haiyan which struck the Philippines in November 2013.

Will Australia step up on Foreign Aid, loss and damage?

ActionAid Australia’s Deputy Executive Director, Michelle Higelin, spoke from the third World Conference on Disaster Risk Reduction in Sendai. In her statement she called for all developed countries, including Australia, to commit at least 5{17ac88c265afb328fa89088ab635a2a63864fdefdd7caa0964376053e8ea14b3} of their official development assistance to disaster risk reduction, and restore Australia’s Foreign Aid budget to 0.5{17ac88c265afb328fa89088ab635a2a63864fdefdd7caa0964376053e8ea14b3} of Australia’s gross national income.

“This is also a reminder to the Australian government of how critical our aid program is, and that in the face of increasing frequency, scale and impact of disasters, we should be lifting our aid investment not cutting it to an all-time low. We should be prioritising the needs and demands of developing country partners on DRR over our own national interests – which is little help in times of crisis such as this.

“We’re calling on the Australian government to put the rights of vulnerable groups, including women, at the forefront of its agenda at this World Conference and to restore its aid budget to 0.5{17ac88c265afb328fa89088ab635a2a63864fdefdd7caa0964376053e8ea14b3} of our gross national income. We’re also calling on world leaders to take into account the urgency of the situation. Disasters like Cyclone Pam are coming harder and faster, and eroding poverty reduction efforts. There is no time to lose.”

Higelin also outlined that the ambition of global leaders in addressing climate change and disaster risk reduction are falling well short of protecting the most vulnerable people, especially women who are disproportionately affected by disasters.

“Everything that’s come out of the negotiations ahead of this conference indicates that the ambition of global leaders is falling short, and it will not achieve the outcomes needed to protect the world’s most vulnerable groups going forward,” Ms Higelin said.

“Cyclone Pam is a devastating but timely reminder that there is no time to lose in making ambitious global commitments to reducing the risk that disasters pose to populations everywhere, and particularly to poor and marginalised in local communities all over the world.” Higelin concluded.

In the debate over a new global climate agreement the fairness of a loss and damage clause is hotly debated by developed countries, but seen as vital for many of the more vulnerable nations. Nations like Vanuatu.

Loss and damage is all about compensation for those countries like Vanuatu that have contributed little to global warming but are most vulnerable and reap the whirlwind through higher intensity storms or other extreme weather events.

How can you look at the pics of pain & devastation coming out of Vanuatu & not think #lossanddamage? #climatechange #adp2015 #Paris2015

Cyclone Pam and the devastation of Vanuatu and other Pacific nations is one more step on the road to a climate agreement in Paris in December 2015.

Are developed nations like Australia willing to commit to ending poverty in our region and reducing vulnerability with climate adaptation?

Contributions to the Green Climate Fund and a robust loss and damage clause are important attributes to sharing the cost equitably, according to the Least Developed Countries (LDCs).

Will Australia step up to the mark in Paris? or be awarded with another grand fossil award?

You can give donations for emergency relief to help the people of Vanuatu through a number of aid agencies including:

Categ 5 #CyclonePam. Our thoughts and prayers with the people of #Vanuatu. Can there be a louder call for urgent action on climate change?

Help me report live on the ground at the Paris climate change talks. I am crowdfunding support to help meet Paris accommodation and living expenses for three weeks for myself and my teenage daughter.

We will be covering the conference in December 2015, the negotiating positions of Australia and other countries, and associated events to give you grassroots and informed analysis from Paris. The return on your investment will be some great live reporting via twitter and news articles plus an honourable mention on my blog of your support.