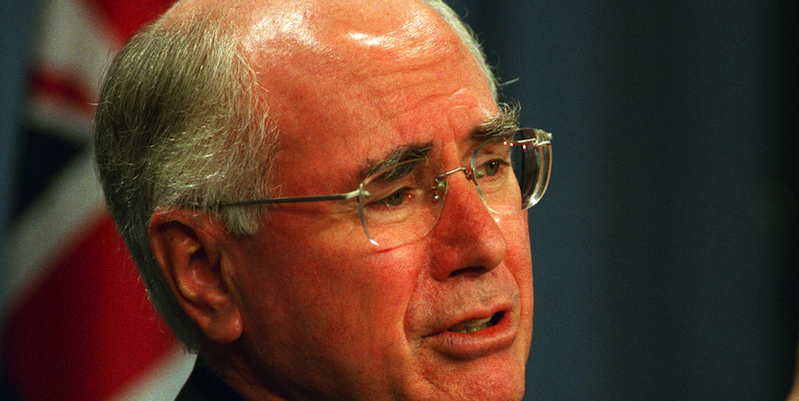 When Samantha Maiden reported today that the Audit Commission wanted super-generous seniors health card benefits to self-funded retirees reversed, I dug up my 2002 SMH budget comment on the matter. The Libs are to blame for this totally unsustainable entitlement culture they knew would help cripple the budget over time due to our aging population. If they don’t act in the budget and instead just cut benefits for the less well-off they will be credibility-naked.

Don’t hold your breath for action

What a shocking dilemma! The Liberals overwhelmingly won the over-55 vote at the 2001 election, while Labor outpolled them in just about every other age group. They did it partly through a massive budget bribe of $900 million – including huge tax cuts for self-funded retirees, letting lots more elderly people get the seniors health card and even throwing in a $300 giveaway if you received any aged pension at all.

I wrote in last year’s budget lock-up that the government was “eerily silent on the implications of this supposedly quick and easy largesse”.

“We have an ageing population. Fewer and fewer people of working age will have to pay for more and more retired citizens.”

So what do we get this year, without the slightest hint of deprecation? A weighty tome saying we’d all be ruined without super tough action to rein in outlays on the aged (my piece on the first intergenerational report is also published below). Otherwise, Treasury said, we’d have to blow out government debt or whack up taxes to fund a crazy $87 billion deficit by 2042.

What new policy would Costello produce? What would he do about this disaster in the making? Nothing really. Like George Bush, who talks free trade and signs off on billions of farm subsidies to earn a few votes, Costello and co. look solemn and throw the aged and the multidude of baby boomers about to enter their ranks some more largesse.

Holders of the seniors health card, that golden bit of plastic, will now pay an extra dollar – that’s right, $1 dollar – to fill a prescription, even if they’re flush with funds after Costello last year let elderly couples earn up to $50,000 a year in investment income without paying any tax. Workers, of course, even the lowly paid, will be slugged with an extra $6.20 to fill a prescription.

What could he have done? For a start, he could have accepted the key recommendation from the independent review of fuel taxes which he commissioned in March 2001. The Trebeck report, realesed in the lock-up, recommended the reintroduction of indexation of the petrol excise. No way, said Costello.

Howard and Costello had done a minor fiddle to shortchange voters on compensation for higher petrol prices due to the GST. They said they were trying to protect the revenue. Then, after Howard thought he’d lose the election over his scam mid way through last year, he didn’t fix the fiddle, he abolished indexation! That will cost billions soon, and the figure will keep growing.

They could also have made the case for much greater immigration, which Treasury forecast would make a huge difference to the problem. Instead, Costello failed to mention this proposal in his glossy budget overview.

They could have announced a much-needed review of superannuation with a view to reigning back the endless tax take of the government so people would actually have a chance to build secure retirement income. Instead, he met his election promise to slightly lower the super surcharge for high income earners, the surcharge he introduced in the Liberals’ first term.

Oh well. Next time, eh Peter? Or perhaps he’ll leave that to Labor when it gets back into government years hence. After all, on the election figures they represent all those people who’ll bear the burden of funding the people who voted you in.

The long awaited Treasury report on our ageing population tells us what we already know – we’ve got a big problem – but puts some figures on just how big.

The cost of health, aged care and aged pensions will explode, and proportionately fewer workers will have to pay for them.

The figures are almost inconceivable: Treasury estimates that if revenue stays at the current proportion the economy’s output (GDP), by 2042 we’d have a deficit of $87 billion in today’s dollars.

The government’s message is that we have to act now to lower those doomsday numbers and massage the expectations of Australians about what government will do for them in old age.

� By 2015 baby boomers will be entering old age at the same time as fertility rates and death rates are falling. The number of births per Australian woman is already below the 2.1 needed to have a steady population, and this could fall to 1.6 by 2042.
� Federal government spending on health is likely to more than double to 8.1 percent of the economy’s output by 2042, fueled by a higher proportion of elderly people and, even more significantly, because people will want access to the latest expensive technology and drugs.
� Government subsidies for drugs under the Pharmaceutical Benefits Scheme could rise by five times, outstripping spending on hospitals and doctors.
� Spending on aged care, mainly nursing homes, will more than double by 2042.
� The number of Australians old enough for the aged pension will escalate from 2.7 million to 6.3 million.

� Increasing government debt – this would mean higher interest rates and less investment – and the next generation would have to pay for it. Higher taxes means less disposable income, with a heavier tax burden for working-aged Australians to pay for their parents sins.
� People have to become more self-reliant in their retirement. Superannuation is a top priority.
� People need to work longer, and jobs must be found for people wanting to work but who can’t find work.
� We need much higher levels of immigration, a finding ignored by the government in its glossy overview of the report. The report states: “Higher migration would tend to increase growth in the labour force and thus in GDP. The composition of the migrant intake also influences spending.”
� Treasury suggests a net migration rate of 135,000 people a year, an increase of 50 percent. On that basis, it says this: “As immigrants are younger on average than the resident population, the increased migration scenario results in a decline in the aged to working-age ratio over the next four decades and a ten per cent increase in GDP by 2041-42. This increase in GDP results in government spending on health, aged care and pensions falling as a percentage of GDP.”

The government has painted the doomsday scenario and said we have to start work on the problem now, yet the only real start is to charge seniors with a health card an extra dollar on their prescription drugs – including the many self-funded retirees given access to the card in last year’s budget

In a crazy twist, Minister for Ageing Kevin Andrews, under the heading “Planning for an Ageing Australia”, announces lots MORE spending on the aged, including more care services in nursing homes, increased nursing home subsidies and relaxing the income test for nursing homes.

The government has not faced the tough decisions it wants to avoid – increased migration, getting its fingers out of superannuation savings, restoring petrol indexation, and the like.