Australia’s #climate policies under spotlight at #COP22 by @takvera #Auspol 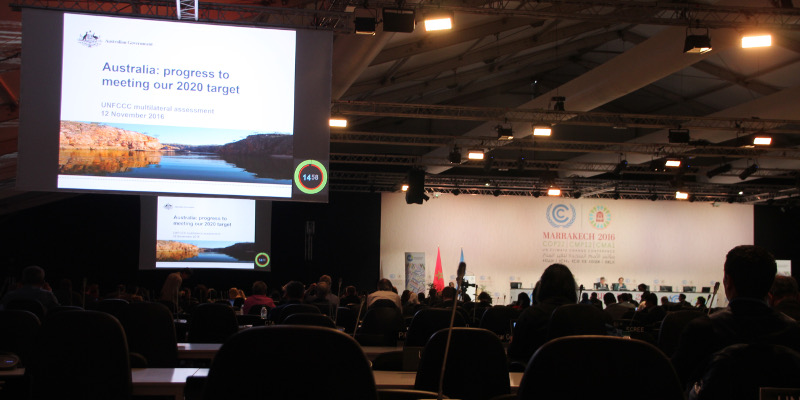 Australia was under the spotlight at COP22 in Marrakech as part of the SBI multilateral assessment process for climate action. You can read the 31 pages of written questions and responses already on record (PDF). I attended this session in the Casablanca Plenary Hall.

Each country was allocated 30 minutes of live questioning following a brief statement by the country being questioned.

Europe was up first with their statement and then questions from USA, New Zealand, Australia, Saudi Arabia, Canada, Singapore, China. Europe then responded to these questions.

Then it was Australia’s turn with Australia’s lead negotiator Ambassador Patrick Suckling saying that the Emissions Reduction Fund (ERF) is delivering real emissions cuts and that Australia is on target for meeting 2020 and 2030 targets.

Ambassador Suckling outlined that Australia was a world leader in a number of areas including: in marine conservancy with substantial areas set aside for conservation (See SMH: Australia’s marine parks under threat after review, environment groups say); National Landcare program in preserving landscapes and biodiversity and involving communities in care of the land; and prioritising threatened species.

He articulated that at the heart of Australia’s climate policies is the $2.55 billion Emissions Reduction Fund (ERF). (But see the Guardian: Direct Action funds ‘spent on projects that would have happened anyway’)

The clean energy investment funding by the Australian Renewable Energy Agency and Clean Energy Finance Corporation were also highlighted as strong and important components for growing the renewable energy transition. There was no mention that $500 million was recently cut from ARENA budget. ARENA was briefly a world leader in renewables R&D. Or that this government originally campaigned to close both these bodies which were setup under their own legislative authority, but only decided to keep them in March 2016.

On climate finance in 2014/2015 Australia provided $249 million. At least $1 billion over 5 years was announced in Paris for climate finance. (But note that this is not additional funding but comes from a much reduced Foreign Affairs Aid budget slashed in December 2014).

Ambassador Suckling did outline that Prime Minister Turnbull increased climate aid by $300 million for the Pacific region at the Regional leaders meeting in September 2016.

Australia has developed a comprehensive programs for Adaptation to climate change.

The government had drawn up the Reef 2050 plan to manage impacts on the Great Barrier Reef. Unfortunately with temperatures increasing causing marine heatwaves, we are likely to see more massive coral bleaching events like in 2016. The Reef 2050 Plan is far from enough by itself in saving the Great Barrier Reef. For that Australia needs to play it’s fair share in emissions reduction policies and targets.

Australia has continued to invest in the National Climate Change Adaption Research Facility (NCCARF), but there was no mention of cuts to CSIRO funding resulting in loss of climate research capacity at the start of 2016.

Ambassador Suckling highlighted that Australia has strong Institutions and Frameworks. “Our 2030 target of 26-28 percent reduction on 2005 levels by 2030 is a Strong credible response to climate change” he said.

Then the Questions to Australia

Korea wanted to know why few meaningful actions were quantified. What are the key actions by 2020? Does Australia expect to achieve its targets?

Europe had 3 questions. The first slipped by too quickly. The second was on the growth in LNG and 27 percent fugitive emissions growth. The third question was why Australia had excluded emissions from natural disturbances.

New Zealand said they enjoyed the photos in the slide presentation. They asked about the Safeguard mechanism and whether it will deliver the 2020 target and why.

Switzerland asked a question on the National energy activity plan.

USA was very long winded and questioned the expansion of fossil fuel production and whether is it compatible with our 2020 target? They also wanted to know if the scale of the emissions reduction fund was sufficient to meet our targets.

China wanted to know if their was any consideration or space to enhance emission reduction targets?

And the last question was from Zimbabwe on capacity building. 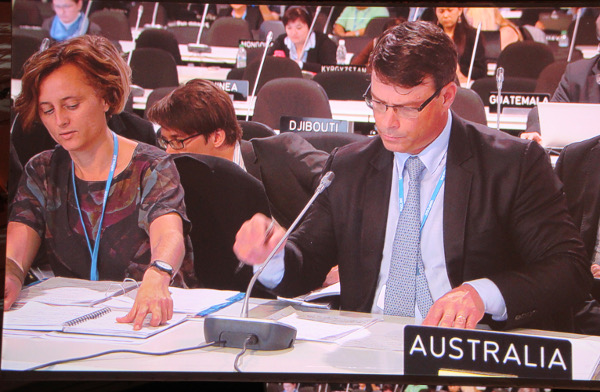 Then Australia was up responded to the questions.

“Yes, we do believe we will meet our 2020 targets” said Ambassador Suckling.

In relation to Korea question on table 3: appliance energy improvements, building construction code, these are included in projects. Mitigation impacts have not been seperetely quantified.

There is a long history of working effectively and collaboratively across different agencies. Used the example of the combination of Energy and Environment Departments in a new ministry after the 2016 federal election.

On the question regarding objections to LNG & fugitive emissions, he outlined their were significant processes to keep this in check including relevant modelling, project planning, quality control, and external review.

The question from New Zealand on whether the safeguard mechanism will be effective in reaching the 2020 target and why? He explained the core component of ERF – reverse auction system. The safeguard mechanism is set at a highpoint of emissions from a businesses. From 2020 it will be set at best practice benchmarks. It is legislated under act of parliament & has penalties that can be applied for breaches.

On the Canadian question on Land use abatement, ambassador Suckling said a number of forestry related projects are delivering abatement. EG afforestation purchased under the Emissions Reduction Fund provides for forest management such as in avoided harvest to contribute carbon sequestration. (Although some doubt exists that some projects would not have happened anyway). Established a Bioenergy equity fund $100 million co-funded with private finance.

On the nature of abatement task: Reductions from ERF, Renewable Energy Target (to 2020) and renewables financing policies of ARENA and CEFC. Suckling said the government was committed to review climate abatement and targets policies in 2017. “Australia’s policies are working to achieve 2020 and 2030 target.”

He restated that the Prime Minister unveiled $300 million package of support to the Pacific in September 2016. “Around 60 percent of that is for capacity building for adaptation.” A lot of countries already spending on adaptation finance.

Australia is also building up capacity in weather services like in Timor Leste, disaster management like in Fiji. Working in the Green Climate Fund.

“Yes we do support a lot of capacity building for our neighbors.” said Suckling. That concluded the dialogue.

Through Australia’s presentation and responses to questions I just shook my head and sighed, while trying to take notes. Yes, the responses were accurate, as far as they went. But they failed to tell the deeper political story concerning climate action by the Federal Government of Australia. My beef isn’t with our diplomatic staff who are endeavouring to the best of their ability to do a very difficult sell to the global community.

Next up was Austria with a comment, “We have No Kangaroos in Austria”.