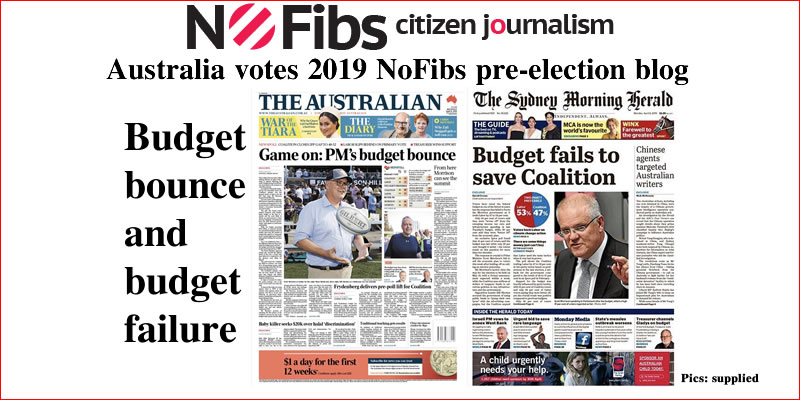 Political tension over Adani ahead of poll

The campaign for Indi kicks off

Federal budget a success or a failure, depending on who you read

Political tension over Adani ahead of poll

Queensland LNP Senator James McGrath has reportedly threatened his own federal environment minister, Melissa Price, with issuing a press release calling for her resignation if she doesn’t speed up the approval process for Adani’s Carmichael coal mine.

Renee Viellaris writes, “The anger cannot be underplayed. So much so, that Queensland Senator James McGrath sent Price a letter saying he would issue a press release calling for her resignation over the issue if she did not fix a problem she created by attempting a deliberate go-slow on the project.” Anger over Adani could split Liberal-Nationals coalition.

Prime Minister Scott Morrison would not be drawn on if the mine would be approved before the election was called.

Opposition leader Bill Shorten told the media Prime Minister Scott Morrison was facing an internal fight in Victoria and another in Queensland.

The campaign for Indi kicks off

After yesterday claiming that Bill Shorten wanted to ‘end the weekend’ with his electric vehicle policy, Scott Morrison has again attacked Labor’s policy by accusing it of wanting to take away choice.

Senator Kristina Keneally appears to have answered the question over recharge times of electric vehicles. Speaking in Brisbane, she ran through a list of Coalition members who had openly supported zero vehicle emissions.

Federal budget a success or a failure, depending on who you read

Simon Benson wrote, “The Coalition has moved to within striking distance of Labor with a surge in support following last week’s budget, giving Scott Morrison momentum as he prepares to call a May election.” Game on: Morrison’s budget bounce. Ipsos poll: 53-47 result puts Morrison government on course for major election defeat.

David Crowe wrote, “The Morrison government has lost ground with voters after pledging a sweeping round of personal income tax cuts, with the Coalition trailing Labor by 47 to 53 per cent in two-party terms in the wake of the federal budget.”

Queensland Deputy Premier, Jackie Trad, has called on the federal government to announce the polling date.

ABC election analyst, Antony Green, notes a constitutional quirk that a state government such as Queensland could use to break ranks with the commonwealth and issue half-senate writs.

Bill Shorten continued to remind voters that the delay in calling the election allowed the government to continue using taxpayer funding for advertising.

$136 million in government advertising has been spent since the beginning of the year, David Crowe reports. Taxpayers’ bill for advertising hits $136 million as Scott Morrison prepares to call an election.