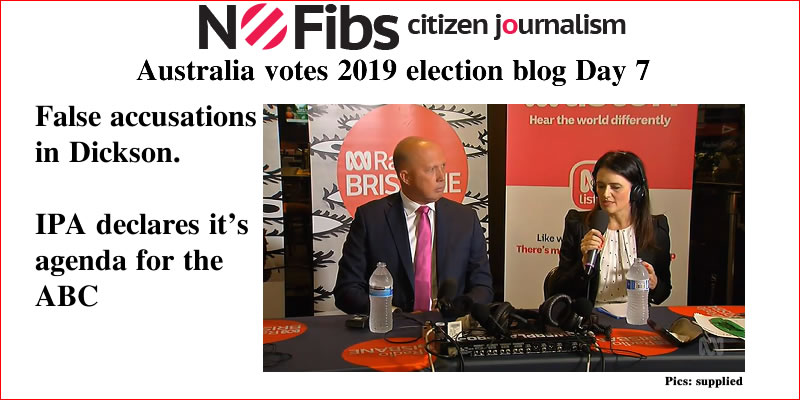 The ghost of Twitter past has visited George Christensen

Bill Shorten clears up superannuation policy as he campaigns in Cowan

Scott Morrison picks some carrots as he campaigns in Tasmania

IPA plan to sell the ABC

The ghost of Twitter past has visited George Christensen

Kelly Burke reported, “Besieged Liberal backbencher George Christensen has been visited by the ghost of Twitter past, as he battles the mounting controversy over his travel expenses. The Queensland MP is facing allegations he charged taxpayers more than $3,000 for connecting flights to the Philippines to pursue a romantic interest. Christensen tries to cover Twitter tracks over criticism of colleagues’ travel perks.

Mr Christensen will likely be found to have operated within the rules. As the process for Barnaby Joyce revealed last year after his own questionable travel claims, the Independent Parliamentary Expenses Authority relies on the justification provided by the MP or senator for the expense. Barnaby Joyce and Vikki Campion cleared over travel expenses.

Bill Shorten clears up superannuation policy as he campaigns in Cowan

Jonathan Lea was back pressing Mr Shorten for the cost to the economy of the proposed emissions trading scheme and the offsets.

Scott Morrison picks some carrots as he campaigns in Tasmania

Prime Minister Scott Morrison hit the marginal Labor seats of Bass and Braddon in Tasmania today. He’s confirmed $100 million of funding for stage three of the irrigation scheme. Labor has also agreed to the funding.

IPA plan to sell the ABC

It’s not a new policy idea from them, but the Institute of Public Affairs has used the election to voice it’s support for the federal government to privatise the ABC. David Crowe reported, “Coalition candidates are being urged to endorse a conservative manifesto that includes selling the ABC, slashing the company tax rate and pulling out of the Paris Agreement on climate change.” Coalition MPs urged to sell the ABC and support a flat tax in IPA call.

While Senator Mitch Fifield confirmed in senate estimates last year that he was an IPA member, he said he did not support the privatisation policy.

Government ministers back-pedalled in June 2018 on a Liberal Party federal conference vote to privatise the ABC.

On a LNP margin of 1.7 per cent, ABC election analyst Antony Green writes of the electorate, “Dickson is one of the newer Queensland seats, first contested at the 1993 election. It is named after Sir James Dickson, a leading advocate of Federation, Premier of Queensland 1898-99, and Minister for Defence in Barton’s first Federal Ministry.” Dickson.

ABC Brisbane did a news blitz of Dickson yesterday and revealed some of the voters who will decide the electorate’s future member. The emotions range from confusion, apathy, determination, pro-Dutton, anti-Dutton and the concerns of the youth.

Some of the people working to end Peter Dutton’s eighteen-year rein are refugee advocates, volunteers, Labor and GetUp!

Incumbent Peter Dutton says he’s put the turmoil of his challenge to Malcolm Turnbull behind him and will serve out his term if returned as member.

ABC Brisbane spent time in the seat of Dickson yesterday for radio and television reports. During the live radio interview, incumbent Peter Dutton apologised again to Labor’s Ali France for accusing her of using her disability as an excuse for not moving into the electorate.

Mr Dutton was asked to respond to a racism accusation made by Greens Senator Larissa Waters on ABC Q&A the previous night. He declared it as a “publicity stunt” and questioned why the national broadcaster would allow such an “unsubstantiated claim” to be aired unchallenged.