CLIMATE change efforts in Australia have become a matter of simple mathematics.

With the Coalition’s Direct Action Bill in place just this week, after a deal struck with the Palmer United Party and Senate crossbenchers, Australia is now attempting to reduce its carbon emissions by 5 per cent by 2020.

It’s official: we’re trying, and we won’t have to wait very long to gauge if this policy of financial incentives for major atmosphere polluters to reduce emissions is working.

Mind you, the repeal of the perfectly good carbon tax was supposed to reduce my electricity bill. So far, it’s gone dramatically skyward, no matter how many times Environment Minister Greg Hunt assures me it has not.

Meanwhile, our television screens are replete with footage of Tony Abbott planting trees, as though fixing climate change was that simple.

The guy doesn’t like talking about climate change, it’s clear.

The first visible signs of Mr Abbott taking Direct Action against climate change as Prime Minister came a year ago, with his televised efforts fighting fires with his local Rural Fire Service (RFS).

While it’s commendable that he so visibly helped NSW volunteer fire fighters during the bushfire crisis in New South Wales in October 2013, by rolling up his sleeves and getting his hands dirty, questions were raised at the time about whether his government was doing its international climate change fighting as collaboratively.

It seemed terrible timing for the newly-minted Prime Minister to close the Climate Commission, a science-based climate authority created under Julia Gillard’s leadership, just before some of the most damaging and unseasonal bushfires were linked, by scientists, to human impact on global warming.

Although I can see why many analysed Mr Abbott’s fire fighting motives, I’d rather he just encourage his MPs to volunteer for their local RFS, and look to ways he might represent us at international climate change events. Representing us is, after all, his job.

While bushfires ravaged parts of NSW in October and November 2013, destroying homes and impacting lives, the Intergovernmental Panel on Climate Change (IPCC) was meeting in Georgia.

The IPCC is described as: “The leading international body for assessing the most recent scientific research on climate change”. It’s outcomes are regularly reported in the Australian media, and not just the left-leaning titles.

In November 2013, climate change talks in Warsaw came and went without an Australian delegate.

Further bushfires occurred last summer, the most damaging were those in Western Australia in the Perth Hills region in early January.

Peak-of-summer bushfires are a commonplace occurrence in Australia, so the climate change link was not so intense in the media at the time.

In September, Mr Abbott neglected to publicly explain why he missed a UN climate change summit in the United States by just one day, while attending talks on Australia’s military  involvement in Iraq.

The guy doesn’t like talking about climate change, it’s clear.

As the traditional bushfire season takes it grip nationally, it will be interesting to observe attempts to hose the climate issue down, or whether unseasonal bushfires are assimilated into the new Direct Action plan. 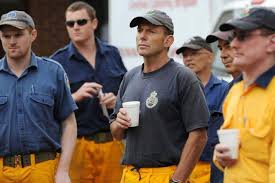 Tony Abbott with his local RFS.

Direct Action is the perfect solution for a local bushfire. Hazard reduction, containment lines and controlled burns are all utilised in the battle. Local RFS brigades are assisted by interstate teams when more assistance is required. On many occasions, international crews and/or equipment (such as aerial fire fighting machinery) are deployed from overseas. Bushfire fighting is an international movement which assistance to afflicted communities when there is a need.

What I hope is that the government has its eye on the issue  and someone (perhaps an elected leader?) sparks a rational debate based on the data, because surely Australia’s bushfire statistics would be of relevance to international climate change talks?

Only one person in this week’s Prime Minister’s Science Award’s audience gave Tony Abbott a loud show of applause after his speech, which seemed designed to inspire forgiveness for the Coalition’s terrible track record on supporting the concept of science.

His deft joke around the deafening silence was one thing. Whether Direct Action does what he is so confident it will, will be another.

As the Coalition is so fond of telling us: let’s wait and see.

But I suspect we’re witnessing a little of what Direct Action on climate change will consist of: getting hands dirty locally, fighting fires and planting trees, and plenty of support for coal mining in a continent perfectly designed for solar and wind energy capture, with no eyes in government on the bigger picture.

This post first appeared on Michael’s blog and Woop Woop.