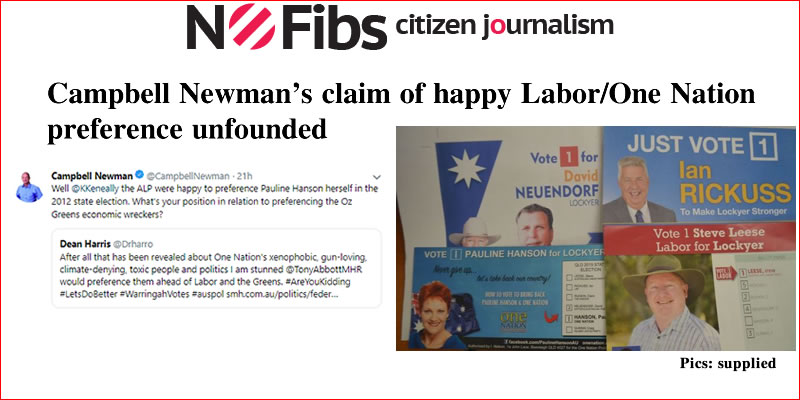 Former Queensland premier Campbell Newman’s attempt to jump on the Greens-bashing wagon has failed miserably. Days of back-and-forth action between the major parties over preferencing One Nation and the Greens reached a crescendo on Friday night, but Mr Newman had the wrong year for his attack; he also seemed unaware that his own Liberal National Party (LNP) had recently decided it preferred the Greens over Labor for the seat of South Brisbane.

When footage emerged of Senator Pauline Hanson discussing the government conspiracy theory around the Port Arthur massacre, it prompted Prime Minister Scott Morrison to declare on Thursday that the Liberal Party would not preference Pauline Hanson’s One Nation (PHON) above the Australian Labor Party at the next federal election on its how-to-vote cards (HTV). When asked why he wouldn’t preference the Greens higher than PHON, Mr Morrison launched an attack on the party.

“Frankly, I’ve always found the Greens to be a real serious danger to Australia. The Greens have opposed us on almost every element of national security legislation we have put into this parliament,” he declared.

His comments prompted other Coalition members to pile on the Greens by likening them to One Nation. By Friday night, the lambasting was in full flight as Sky After Dark (SAD) commentators launched their brickbats. Gemma Tognini declared, ‘these people are drunk on their own urine’.

SAD commentator Campbell Newman launched his rocket at about eight o’clock. His reply tweet was fired at Dr Dean Harris Labor’s candidate running against Tony Abbott in the federal seat of Warringah. Addressing Labor Senator Kristina Keneally, Mr Newman inferred that Labor had done a preference deal with Ms Hanson during her state election run. Unfortunately, he had the wrong year. Electoral Commission of Queensland records show that Ms Hanson was not a candidate in the 2012 state election.

Ms Hanson had rejoined her old party in 2013, rose to take the leadership again in 2014 and contested the 2015 election in the seat of Lockyer. Labor HTV cards from the time show she was not preferenced above incumbent LNP MP Ian Rickuss. However, PHON did do a preference swap deal with Katter’s Australian Party (KAP).

The real clanger made by Mr Newman, the prime minister and the faithful commentators was ignoring the fact that just weeks earlier LNP leader Deb Frecklington had proudly announced her preference for the Greens. In a move laced with vindictiveness to unseat Deputy Premier Jackie Trad, Ms Frecklington declared HTV cards would recommend a vote for the Greens candidate over Ms Trad at the 2020 state election in the seat of South Brisbane.

An earlier tweet in March shows that Mr Newman was aware of the LNP decision to prefer the Greens.

It’s an obvious fact that renders the whole Greens-bashing exercise even more ridiculous than it already is. However, the Coalition kept up the HTV attack on Sunday with Mathias Cormann hitching himself to the bashing wagon.