The Wyatt Roy scenario and why the Queensland LNP prefer One Nation: @qldaah comments #qldpol #auspol 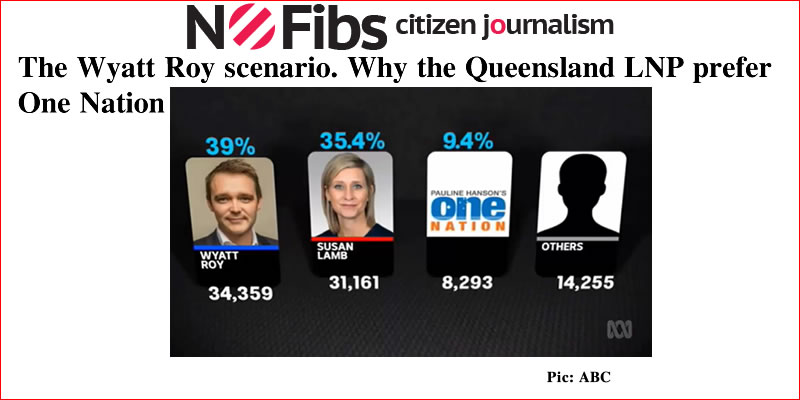 In 2015, Julie Bishop declared that Wyatt Roy would be the prime minister of Australia by 2029. Journalist Jana Wendt wrote a lengthy exposé for SBS on him ascending to that role. Yet, in the following year, he had lost his Queensland seat of Longman and Ms Bishop was chastising him for visiting the Iraq war zone.

How did Roy die so hard politically in such a short period of time? Part of the answer involves the distribution of Pauline Hanson’s One Nation (PHON) preferences in the Queensland seat of Longman. It’s the very thing that the Queensland Liberal National Party (LNP) now fear the most in the lead up to the 2019 federal election.

As ABC election analyst Antony Green recently explained: “When One Nation does well, they overwhelmingly take those votes off the Coalition.”

In Queensland especially, where PHON places Labor above the LNP on how-to-vote (HTV) cards and campaigns against the incumbent, they split the conservative vote. Exemplified at Longman in 2016, on first preferences Wyatt Roy received 34,359 votes to Labor rival Susan Lamb’s 31,161. However, after PHON preferences were distributed, Labor held 44,729 votes over the LNP’s 43,339.

Pauline Hanson is well aware of this play. In August 2016, she reissued this threat to the Queensland LNP ahead of the state election by stating: “Every sitting member in Queensland on my how-to-vote tickets will be put last.”

A cautious Queensland LNP leader Tim Nicholls and deputy leader Deb Frecklington responded in October 2016 by urging that there be no attacks on PHON.

The 2017 Queensland election was won by incumbent Premier Annastacia Palaszczuk. Asked to assess the LNP’s performance, former Queensland premier Rob Borbidge stated: “Stay away from One Nation. They’re toxic. They hate us. They cost us seats. They will do everything to destroy the LNP and we shouldn’t be doing anything to help them.”

Scott Morrison’s recent decision to place PHON below Labor on the Liberal Party ticket has split the Coalition and empowered Hanson to invoke the the same Queensland threat of preferencing the incumbent last.

Queensland LNP MPs such as Ken O’Dowd refuse to adopt the preferencing strategy outlined by the prime minister.