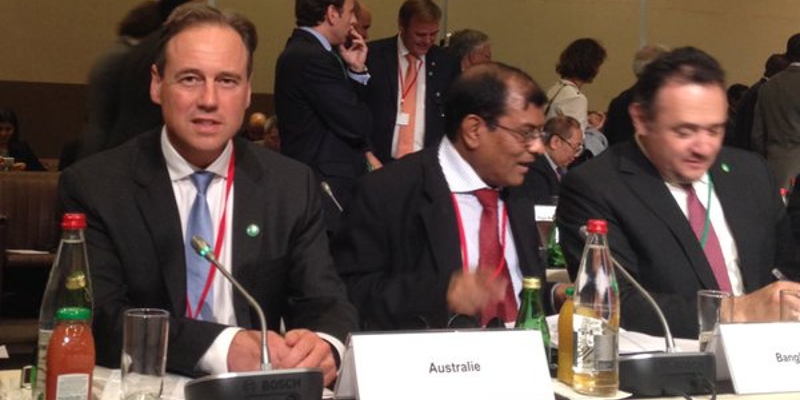 It seems Ministers from 62 nations were won over by Australian Environment Minister Greg Hunt’s charm at Precop with applause being delivered to speeches from Ministers from both Australia and Canada. (see my article on the Paris Precop ministerial meeting)

Australia is being seen as back on side diplomatically on the climate issue, especially after Hunt was a important broker in a deal phasing down HFC emissions in the Montreal Protocol update last week.

Just a couple of weeks ago Greg Hunt was being rebranded by activists as the Minister for Coal for approving the Adani Carmichael Coal mine in Queensland’s Galilee basin for the second time.

A mine that is again the subject of litigation with the Australian Conservation Foundation launching a challenge (media release) in the Federal Court that the Minister failed to consider the climate pollution impacts of the mine and that it is inconsistent with Australia’s international obligations to protect the World Heritage-listed Great Barrier Reef.

“We bring a new energy and a new commitment to these processes,” Mr Hunt told Fairfax Media after the ministerial meeting, as reported by Peter Hartcher in the Sydney Morning Herald. (Paris climate talks: Australia comes in from the cold) The conduct of the meetings were closed to the media.

“At the first plenary session in the ministerial meeting, of all the countries that spoke only two countries received strong applause – Australia and Canada,” Mr Hunt said.

The Climate Institute’s John Connor, commented: “There’s an audible sigh of relief around the world when everyone realised that two countries with formidable diplomatic corps are not going to be ridden on mandates to be difficult.”

“Paris will produce an outcome of about 2.7 degrees but everybody is committed to the Paris process to review national targets,” said Mr Hunt in the Fairfax interview.

“The only figure being talked about is five years – we will probably come back every five years, in 2020, 2025 and 2030, for subsidiary rounds of new pledges” for the pledging period to 2030.

“The Paris meeting won’t deliver 2 degrees, but the Paris process will,” Hunt said.

But the gap between pledges which would see 2.7 to 3 degrees of global warming this century and the 2 degrees limit remains. The problem is CO2 emissions are a cumulative problem that we are adding to all the time. The longer we delay emission cuts the higher and harder those cuts need to be to stop global temperatures exceeding 2 degrees C. We are kicking the problem like a tin can further down the road.

Five yearly reviews are a compromise because the initial INDC pledges are insufficient, especially Australia’s pre 2020 and post 2020 targets. So instead of talking about Paris conference securing pledges to limit warming to 2 degrees, the language is shifting to the Paris process will do the job.

While Hunt was receiving plaudits from fellow Ministers, Australian Foreign Affairs Minister Julie Bishop was telling a Coalition party room meeting in Canberra on Tuesday that no additional money and no part of the government’s climate policy would change as a result of the United Nations-led meeting in December, according to Nine News.

To Julie Bishop Australia’s role at the Paris climate conference is just to assist with “rules and transparency”.

But Australia’s conciliatory noises on climate negotiations have already assisted in Australia, and Julie Bishop, being appointed (DFAT media release) as co-chair of the Green Climate Fund. A fund which we committed to originally under the Labor Government and which former Prime Minister Tony Abbott derided as a ‘Bob Brown Green Bank’. Australia contributed an initial $200 million in December 2014 during Lima COP20 driven by Julie Bishop’s advocacy over Tony Abbott’s opposition.

While our assistance in delivering the first tranche of eight projects under the Green Climate Fund is lauded, the present Government viciously cut our own Australian Foreign Aid Budget in the 2014 Budget and again in December 2014.

These cuts were described by Dr Szoke for Oxfam Australia as cruel and un-strategic. See also article by Stephen Howes and Jonathan Pryke at the Devpolicy Blog: Biggest aid cuts ever produce our least generous aid budget ever.

Much of this aid budget would have supported climate resilience building and climate adaptation in the Asia Pacific region.

While Bjorn Lomborg’s proposed consensus centre is no longer being funded, he still has an advisory role as part of a 14 member International Reference Group on the Innovation Xchange program of the Australian Foreign Affairs Department.

Bjorn Lomborg has just published a survey article in Global Policy on Impact of Current Climate Proposals. The article has already met with a trenchant critical review by Bob Ward from the Grantham Research Institute of London School of Economics who described it as a “textbook example of dogmatic ideology masquerading as scholarship“.

On the current primary instrument for climate action and emissions reduction – the Emmissions Reduction Fund – a new policy brief by the Climate Institute finds that the Coalition Government Emmissions Reduction Fund (ERF) would only be able to purchase 355 million tonnes of emissions reductions. This represents just 3 per cent of Australia’s projected 2015-2030 emissions; 7.5 per cent of Australia’s fair share of the 2°C limit, and 14 per cent of the reductions required for the government to achieve its 2030 target.

“The ERF does not provide incentives to reduce emissions across the economy and is fundamentally limited in its ability to decarbonise the economy,” Climate Institute CEO John Connor said. “Additionally, the ERF is subject to the vagaries of the annual budget process: $5 billion is a lot of money in a budget struggling to shrug off deficits and future governments may find it too tempting a pot to steer clear of.”

Next week the OECD meets in Paris with a proposal by the US and Japan to stop all public funding of nearly all new coal plants. The proposal advocates that only the “cleanest” coal plants, mostly those classed as “ultra-supercritical”, could be funded, and only if renewable energy projects were unviable. Australia is currently lobbying behind the scenes for an alternative scheme supporting investments in older and more polluting “supercritical” coal power technology.

The Climate Institute has urged Australia not to block the proposal. “Why should we support lumping developing nations with anything but global best practice when it comes to energy options?” Clinmate Institute CEO Connor asked.

“In advance of the Paris climate summit later in the month, it is very disappointing to hear reports of Australia pushing for older technology, more polluting, coal plants to be financed. Australia risks further enhancing an older reputation as a roadblock to innovation.”

“The Climate Institute encourages the Australian government to take a fresh look at its position and to cease undermining efforts to direct global capital to cleaner outcomes.” Connor concluded in a media statement.

So perhaps Australia is playing a smoke and mirrors game hoping other nations don’t call Australia’s bluff on climate action? Or perhaps, after Tony Abbott as Prime Minister, the global community is just so relieved that Australia is saying the right things even though on the Federal level we remain a climate laggard doing bugger all in terms of our fair share of global emissions reduction and mitigation.