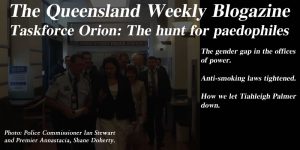 The Courier-Mail can reveal party boss Evan Moorhead was recently deployed to hold behind-the-scenes talks with KAP’s two MPs to coerce them into guaranteeing support for the State Government in exchange for progressing their agenda.

The high-stakes tactic was forced on the Government amid growing fears that former Labor MP and member for Cook, Billy Gordon, had grown isolated and erratic and may drive Parliament to a stand by rejecting key legislation.

The minority Labor administration needs either KAP’s Robbie Katter and Shane Knuth or Mr Gordon to pass laws and avoid any no- confidence motions brought on by the LNP Opposition.

However, relations between KAP and the Government have soured after Labor rejected laws which would have shielded Mr Knuth’s seat of Dalrymple from being abolished in a looming electoral redistribution.

The covert negotiations collapsed yesterday with KAP going public with threats to consider supporting any alternative government arrangement if the option became available.

“We’re saying that as of today, whilst we don’t have the numbers at this moment, if a better option becomes available to us… as of today, all options are live,” Mr Katter said.

“If a better option comes up for us, we will take it.”

Premier Annastacia Palaszczuk held an 11th hour meeting with the KAP MPs in Parliament on Thursday in a bid to convince them the Government was progressing the minor party’s priorities.

These include a rural debt board, a 10 per cent ethanol mandate, statutory sugar and milk marketing and more regional roads funding. KAP had issued a 90-day deadline, which ended yesterday, for the Government to show progress however Ms Palaszczuk insisted in August she wasn’t aware of any growing frustration.

Mr Katter said KAP were not “mischief-makers” looking to deliberately block legislation, but they may not be so sympathetic towards the Government’s agenda. “What we’re saying to them is everyone needs to pull their socks up and jerk into gear,” he said.

Deputy Premier Jackie Trad said the Government’s relationship with KAP remained solid and talks would continue. “They are interested in stable government just as we are in Labor,” Ms Trad said.

Opposition Leader Lawrence Springborg said Queenslanders had voted in Labor “and that has to be respected until such time as the seats change. Even if KAP were to support the LNP actively, that is still one seat short in the Queensland Parliament”, he said. “Nothing’s changed.”” KATTERstrophic failure: Secret Labor talks fail to win KAP. 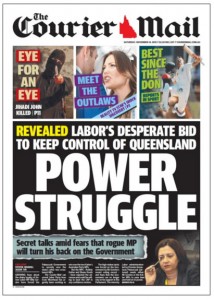 “The thoughts and prayers of all Queenslanders go out to those affected by the tragedy unfolding in Paris.I would like to reassure Queenslanders that there is no known specific threat to Queensland at this time.I have been advised that the terror alert level in Queensland – particularly for our police – remains at high- as it was previous to this harrowing news.Detectives and intelligence officers are continuing to conduct threat assessments around the clock in conjunction with their interstate, federal and international counterparts.

Queenslanders concerned about loved ones in Paris should contact the Department of Foreign Affairs and Trade on 1300 555 135.” Saturday, November 14, 2015 – Media statement

Brisbane to Oman-ama. Some nuclear waste would have to be transported along these routes. #qldpol pic.twitter.com/S3ytchNzYC

Federal govt plans to put a nuclear waste dump 250km southwest of Brisbane are sheer lunacy and an environmental disaster waiting to happen.

Springborg has no problem with nuclear waste in his electorate

Not a lot has changed with the announcement from Katter’s Australian Party today. The KAP duo of Rob Katter and Shane Knuth have publicly declared what the Palaszczuk Government has delivered out of their initial demands at the start of the year. However, they never agreed to support the government and they lack the power to bring down the government.

Labor needs the support of Independent Billy Gordon and Speaker Peter Wellington to pass legislation. For Lawrence Springborg to bring on a vote of no confidence in the government, he’d need the vote of the 2 KAP MPs and either Gordon or Wellington.

The overall numbers in the house remain unchanged:

Patrick Condren reported: “Pull their socks up and jerk into gear”: KAP withdraws ‘sympathetic’ support for the government.

.@RobKatter3 says this doesn't mean they'll always side with LNP – just won't be as co-operative in the parliament pic.twitter.com/sTQD9eHVWO

Well you don't see this every day at parliament … drought-relief fundraiser on tonight @SpringborgMP #qldpol pic.twitter.com/eETfBBFV45

Delays in government documents being provided to Barrett Centre Inquiry. Yet to receive cabinet docs on closure @9NewsBrisbane

Reintroduction of the death penalty

Tegan George reported: A Gold Coast MP has come under scrutiny for visiting local hospitals to see how staff were coping in emergency departments.

“A GOLD Coast MP has “pulled shifts” as a nurse at local hospitals despite being banned from having clinical contact with patients without the formal approval of the national registration body.

Ros Bates, who was a minister in the Newman government, told parliamentary committee hearings twice in October that she had worked shifts at the Gold Coast and Robina hospitals.The Member for Mudgeeraba also told the Gold Coast Bulletin about her moonlighting as a nurse while raising concerns about security and a serious sex offender.

However, the long-serving nurse had conditions about contact with patients placed on her registration in April last year by the Australian Health Practitioner Regulation Agency.

“The practitioner will only use her professional knowledge to practise in management, administrative, education, research, advisory, regulatory or policy development roles,” Ms Bates’ AHPRA registration states.

“The practitioner will not undertake any roles requiring direct or indirect clinical patient contact unless approval to do so by the board or its delegate.”

Ms Bates last night insisted her hospital work had been educational rather than clinical.

“I undertook an education, research, advisory and policy development role in order to gain a firsthand understanding of the needs of hospital and health staff in a policy sense,” she said.

“This is permitted within the conditions imposed on my registration as a registered nurse through the Australian Health Practitioner Regulation Agency.”

On October 14, Ms Bates told a public hearing of the Health and Ambulance Services Committee she had “worked a night-duty shift at the Gold Coast University Hospital” as she detailed the story of an overdosing patient.

A fortnight later she told the committee of shifts she had undertaken at Robina Hospital.

“I did an actual full shift at Robina Hospital a couple of weeks ago,” she said.

“I spent a lot of time in the mental health unit and the ED (emergency department).””: State MP Ros Bates moonlighting as nurse despite registration conditions.

‘You are so up yourself’ says Bleijie

Langbroek addresses children in the gallery

How we let Tialeigh Palmer down

Comprehensive, better and a change