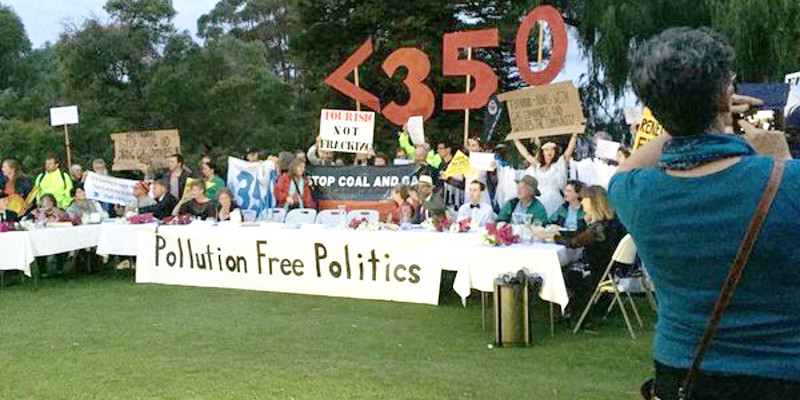 The Gas Industry and all the big fossil fuel companies have come to Perth to talk exploitation of fossil fuels regardless of the climate imperative agreed to in Paris in December 2015. They were greeted on the opening night by climate activists.

The 18th International Conference and Exhibition on Liquefied Natural Gas has brought together the fossil fuel industry to discuss production efficiencies with the current low prices in LNG, and work out how they can continue to maximise drilling and exploitation into the future. There was a Welcome to Country and headline speeches by Prime Minister Malcolm Turnbull and Western Australian Premier Colin Barnett.

A group of 50-60 vocal protesters gathered at the edge of the King’s Park cocktail venue in Perth on Monday night. They called for an end to investment in gas and a switch to 100 per cent renewable energy.

Inside Mr Turnbull praised the gas industry companies and executives inside in his speech.

“That’s why we are reducing regulation; speeding up the process of environmental approvals; making the workforce more efficient and reducing production costs through skills and migration initiatives.”

Turnbull particularly praised the Chevron Gorgon Project on Barrow Island which he approved when he was Environment Minister in 2007. There was no mention of Chevron’s large contributions to political parties, nor the fact they paid virtually no tax on income revenues.

Turnbull did not mention climate change, but he did allude to gas as an important transition fuel in his speech, “We need to support the transition to renewables by providing peaking power and fill the gap from intermittent renewables when the sun is not shining or the wind is not blowing. It is all part of our broader aim to ensure our energy security into the future. Gas is a critical part of the environmental agenda for the future to a cleaner, greener planet.”

Yet fugitive methane emissions (PDF) may counteract any climate benefit. Earlier this year the Climate Progress website reported Methane Leaks Erase Climate Benefit Of Fracked Gas, Countless Studies Find. LNG is also a competitor to renewables and may serve to delay deployment of renewable energy technologies. The Abbott/Turnbull Government have been antagonistic to supporting the renewables sector to date and has driven investment from this sector in Australia.

State Premier Colin Barnett has been a strong supporter of Western Australia’s mining industry, and it’s oil and gas production. he made a point in his opening address at the conference that extractive companies weren,t paying enough attention to their social licence.

“It is no longer sufficient to simply say they are good for the economy, it is necessary to show direct benefits to deal with the inevitable protests on a detailed and factual basis and to resolve any negatives,” he says. “The companies also need to get involved. It is not enough to leave it to politicians, like myself, to fight the good fight. Your voice also needs to be heard.” reported the Australian Financial Review.

The successful multi-faceted community campaign against the Browse Project at James Price Point/Walmadan on the Kimberley coast (See Social Change Case Study) highlighted increasing social concern and withdrawal of social licence for unbridled gas development. Woodside stopped development of the gas plant and port at iconic James Price Point (Walmadan) in April 2013. The impacts of climate change played a smaller role in this campaign, but with COP21’s Paris Agreement, carbon intensity and GHG final emissions of projects will feature much more in campaigns against the oil and gas industry.

In Woodside Energy CEO Peter Coleman’s 1200 word plenary speech (PDF) there was not one mention of climate change, and only fleeting mention of renewables. These companies seek to extract and produce as much fossil fuels for pollution as they can get away with. They are not planning to curtail production to meet the ‘well under 2 degrees C’ temperature goal agreed to by 195 nations at the UN climate conference in Paris.

Much of onshore Western Australia is also under threat of fracking for gas.

Conservation WA says that the WA Environment Protection Authority has refused to assess the environmental impacts of gas fracking. In October 2015 a petition was presented to the WA parliament.

“Over 40,000 people had signed an online petition calling for a moratorium in WA, supplemented by a further 4000 handwritten signatures collected by members of the WA group No Fracking WAy. These people are like you and me – young and old, regional and city people, who have realized that WA’s future relies on clean water, secure food supply, a strong diversified economy, strong regional communities and a safe climate. All of this is at risk if we allow an onshore gas fracking industry to gain control over large areas of coastal WA and the Kimberley.” reported Conservation WA.

My storify of the event: