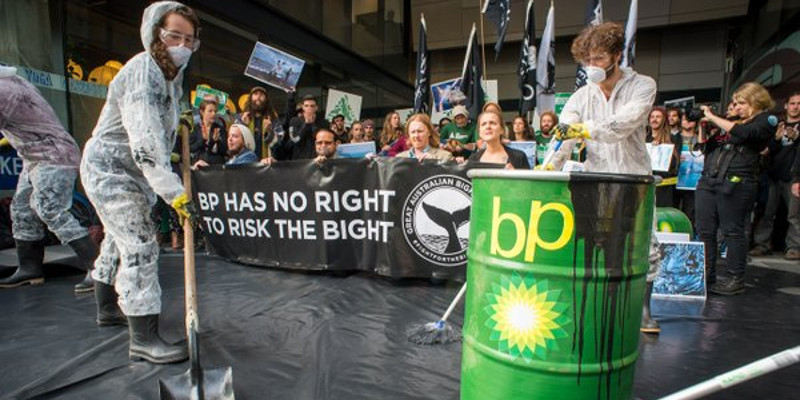 Activists from the Wilderness Society, Sea Shepherd, Friends of the Earth and others came together this morning outside BP Australia’s headquarters on Bourke Street Melbourne to stage a mock oil spill. They are highlighting the massive risks from BP oil exploration in the Great Australian Bight.

These risks are considerable and multiple including the climate risk of exceeding the 2C temperature limit agreed to at the Paris UN climate talks, and the risk of an oil spill damaging the pristine marine and coastal environment from Western Australia to Victoria and Tasmania.

The mock oil spill provided effective street theatre on Bourke Street outside BP’s Melbourne offices. Some people dressed in decontamination suits with 44 gallon drums as props containing the BP insignia. Protestors chanted “BP has no right, no right to risk the bight”.

Meanwhile in London, the message was taken to the British Museum with light projections on the facade. (See BP or not BP) BP is presently sponsoring an exhibition at the museum on Egypt’s ‘Sunken Cities’. A little ironical considering they are contributing to sealevel rise and the next round of flooded or sunken cities. A letter recently published in the Guardian from almost 100 respected figures urged the British Museum’s new director to drop BP as a sponsor.

Questions were asked at BP’s Annual General Meeting in London on the investment risk of oil exploration in the Great Australian Bight. According to Share Action, the lack of transparency is one of numerous financial risks associated with the project. A briefing paper prepared by Share Action and the Wilderness Society points out the high associated infrastructure costs of the project, which have led to an estimated average break-even barrel price of $104. BP has stated publicly its objective for projects to break even at $60 per barrel.

It is estimated BP has already spent $1 billion on this project, including $755 million for a new drilling rig built in South Korea. Drilling work is slated to start in October 2016.

Modelling of a potential oil spill, like BP’s Deepwater Horizon disaster in the Gulf of Mexico in 2010, reveals that the hit to the South Australian economy on fishing and tourism industries could be massive.

“A spill would be devastating for South Australia’s $442 million [$319 million USD] fishing industry and its tourism industries in coastal regions, worth more than $1 billion [$723 million USD] and decimate the rich and many endangered creatures of this ocean, that they call home.” said the Wilderness Society’s National Director Lyndon Schneiders in a media release.

“The Great Australian Bight waters are far more treacherous and more remote than the Gulf of Mexico. The Bight is deeper, rougher and riskier than anything the world watched in 2010 – the chances of another Deepwater spill in this pristine ocean cannot be downplayed,” said Schneiders.

BP has four exploration permits holding a 70 percent majority interest, with a 30 per cent minority interest from Statoil.

The Great Australian Bight is also relatively pristine. 85 percent of the species found in the bight cannot be found anywhere else in the world. The area is also a breeding nursery for the endangered southern right whale, with up to 55 calves born at the head of the bight each year. An oil spill would have devastating consequences on the marine ecosystems.

Bight oil a carbon bomb pushing us beyond 2C

Another important risk is the contribution any oil or gas would make to Greenhouse gas emissions and climate change. The Wilderness Society commissioned a report by respected German consultants Climate Analytics to assess the climate risk.

BP hasn’t revealed how much oil it estimates is in the resource. But a smaller partner in the venture, Bight Petroleum, has estimated there are nine billion barrels of oil in the two prospects it holds. Other companies involved in the venture are Chevron, Santos, and Murphy Oil.

Climate Analytics calculated that if burned in Australia, these oil stocks would amount to one third of Australia’s remaining 2˚C carbon budget to 2050, and produce emissions three times that of Australia’s national C02 emissions from fossil fuels (oil, coal, gas) in 2013.

“Our calculations are based on a fraction of what is in this reserve: it could be four times this amount,” said the report’s author and CEO of Climate Analytics, Bill Hare.

“Adding additional oil reserves to the world’s energy system, as proposed by BP, is inconsistent with the global temperature and the emission limits the Australian Government agreed to in Paris last year. It would simply create the pressure for higher emissions – unless the intention is to not meet the warming limits agreed there.

“Endeavours to add more oil to the system are therefore clearly at odds with the commitment Australia is making globally to meet its climate targets, and ultimately mean the oil will become a stranded asset,” said Hare.

The world agreed in Paris in December 2015 to limit global warming to well below 2˚C and strive to meet the 1.5C temperature limit and to move towards zero carbon emissions after 2050 It is clear from this report that deepwater extraction of fossil fuels from the Great Australian Bight is inconsistent with that goal, and Australia’s commitment made when signing the Paris Agreement.

The Paris Agreement will become legally binding once ratified by 55 governments, representing at least 55 per cent of global emissions. 150 nations – including major carbon emitters such as the US, China and India – have indicated they will attend the signing ceremony in New York on April 22. So the agreement may come into force as early as later this year.

The protest as it unfolded using Storify: Oil spill at BP Melbourne a #FightfortheBight

Updated 15 April: Details of campaign to end BP sponsorship of British Museum, link to my article on BP’s AGM in London