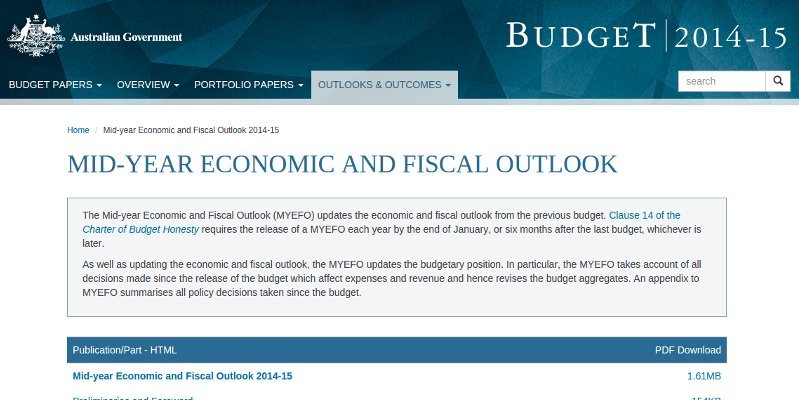 The Abbott Government slashing of climate change infrastructure continues in the latest Midyear Economic Forecast by the Treasurer Joe Hockey, where it was announced the Commonwealth deficit has blown out to more than $40 billion and forecast not to return to surplus until 2019-20 at the earliest.

Joe Hockey was quick to criticise Labor’s budget deficits and promises to return to surplus, but it seems he may never deliver a surplus, according to Peter Martin, Economics Editor of The Age. Hockey pledged after Labor’s 2012 budget that, “based on the numbers presented last Tuesday night we will achieve a surplus in our first year in office and we will achieve a surplus for every year of our first term”. Being in Government it seems, is not as easy as it seems.

One of the biggest drains on the budget over the forward estimates is the Super tax concessions which are due to hit $50 billion per year in 2 years time. As economist Leith van Onselen writes on The Drum: The end of entitlements doesn’t apply to the rich. Labor labelled this lack of gumption to tackle super tax concessions as deeply unfair, according to an ABC News article.

In particular, the Treasurer announced the abolition of Climate Adaptation Outlook Independent Expert Group and the Land Sector Carbon & Biodiversity Board, among others, as part of a measure cutting environmental boards and advisory agencies saving a paltry $76,000 over six years.

Frank Jotzo from Australian National University said on twitter that “Repeal of the carbon price cost Australia’s budget $13b over three years.”

Repeal of the carbon price cost Australia's budget $13b over three years.#MYEFO #justsayinghttp://t.co/eVptbw54K3

Land Sector Carbon and Biodiversity Board

The Land Sector Carbon and Biodiversity Board was established under the Climate Change Authority Act 2011 to provide advice to the Australian Government on a range of Land Sector package measures to help ensure the protection of Australia’s ecosystems and increase resilience to the impacts of climate change.

This Board supervised the work of the Carbon Farming Futures, Biodiversity Fund, Indigenous Carbon Farming Fund, Regional NRM planning for Climate Change, Carbon Farming Skills and CFI Non-Kyoto Carbon Fund. It is clear that much of these areas have already been substantially reduced and any continuing functions will be carried out by the Environment Department.

So even though some functions such as carbon farming may remain as part of the Government’s Direct Action Climate Policy, the independent expert supervision will be gone with the initiatives administered by the Environment Department.

It seems our current Government doesn’t want this report updated hence this independent expert group are slated to go.

A further $9.8 million will be cut from the Murray-Darling Basin Joint Program which manages water infrastructure in the Murray Darling Basin.

This comes at a time when drought threatens large sections of the basin with little or no flow in some sections of the Darling River even today. According to ABC Rural on 9th December 2014, before the latest funding cut, NSW irrigators said there’s inadequate funding to remove constraints to Basin environmental flows, in this time of drought.

The Darling River at Wilcannia No flow at all. pic.twitter.com/CZRbC0DjRy

The indigenous Water Advisory Committee was established in 2012 for integration of Indigenous cultural heritage and natural resource management knowledge into water policy, programme development and implementation, and research activities, and provide Indigenous stakeholder and engagement strategies for water policy. It held 4 meetings between October 2012 and February 2014 before cessation on 30 June 2014.

It seems The Abbott Government is not interested in indigenous engagement with ongoing development of water policy, in a continent plagued by floods and extensive droughts and poor engagement and communication with our first nation peoples who have a wealth of traditional expertise in natural resource management.

These two bodies prioritise and advise on research directions for the Marine Mammal Fund and also give advice on issues of marine mammal management and conservation.

It seems research into our marine mammals is not strongly supported by the Abbott Government with the abolition of these two committees at the Australian Marine Mammal Centre, Australian Antarctic Division.

Joe Hockey announced $3.7 billion slashed from the current Foreign Aid budget. This is on top of $7.6 billion already cut from this budget. Much of this Foreign Aid is used to support programs in south east Asia and the Pacific region including climate adaptation and mitigation. This reduction will also have a large impact on our diplomacy and influence in the region.

Dr Szoke for Oxfam Australia said the cuts were cruel and un-strategic.

“While Australia enjoys the place of the fourth wealthiest per capita nation, these latest cuts will bring Australian aid to its knees, paling in comparison to the aid given by other wealthy nations such as the UK, France and Germany. They reveal a callous lack of care for Australia’s promises to help the poorest people of the world,” Dr Szoke said. “Balancing the budget on the backs of the world’s poor time and time again is a short-term and short-sighted answer. It undermines Australia’s long-term efforts to make the world a safer, healthier and more prosperous place for all.”

Govt stealing from the world’s poorest people so that big business can get away with paying lower taxes: http://t.co/YpCThfqBgj #tax #MYEFO 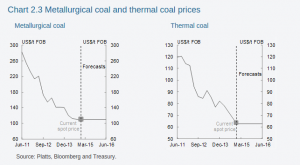 The MYEFO details also notes the fall in coal prices and projects they will stay low over the short-term forecast period to June 2016.

“Thermal and metallurgical coal spot prices are expected to be US$63 and US$110 over the forecast horizon. Without a sustained price recovery, some high‑cost operations may close. However, productivity gains and a lower Australian dollar are expected to alleviate some of the pressure of weak prices on the resources sector more broadly.” the statement says.

However, a Treasury Working paper from May 2014 – Long-run Forecasts of Australia’s Terms of Trade (Bullen, Kouparitsas and Krolikowski 2014) argues that thermal coal prices will remain depressed at below A$80 for the long term to 2030.

This must bring into question the economic viability of the new mines being planned for the Galilee basin that involve huge infrastructure investments in new rail lines to the coast and new port infrastructure. This is beside the question of the environmental impact of new port facilities and dredging would have on the Great Barrier Reef.

Aust Treasury forecast’s Thermal #Coal to also remain below A$80 a tonne in the long run..http://t.co/qbV0VvLGro pic.twitter.com/9aclI6Jt2o

On the same morning as Joe Hockey’s Mid Year Economic Forecast and Outlook, 22 protestors blockaded and halted the first test train load of coal coming from the controversial Maules Creek coal mine on its way to Newcastle’s Kooragang Island coal export terminals.

Fifty eight year-old protestor, Bruce, from Northern Rivers, was one of those arrested. He said in a media release: “Australia’s response to climate change is headed completely backwards. If we can stop this new coal mine we set a precedent for the rest of Australia to stand up.”

Local Newcastle mother, Vanessa Wiebford explained, “I want my daughter to have a future without the horror of extreme heat and fire, and uncertain water and food production. I am bitterly disappointed in Australia’s political leadership and their unthinking support for expanded coal exports at a time when we’re already seeing alarming signs of dangerous climate change. If they’re not going to act to prevent this, then all parents have a duty to risk arrest to try and stop it ourselves.”

Photo of protesters locked down on first coal train from Australia's Maules Creek Mine. Heroes! http://t.co/TPkyDqGe33