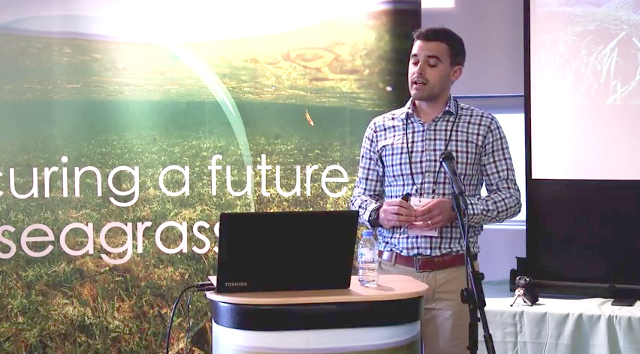 Blue carbon is part of the solution to tackle climate change. So why aren’t we talking about it far more?

Blue carbon refers to the carbon sequestration potential of coastal ecosystems: that zone reaching from just above the high tide mark to the coastal shallows. It includes salt marsh, mangroves and seagrass meadow ecosystems.

We need to take care and nurture our coastal ecosystems as they can play a vital role in bio-sequestration of carbon at rates far in excess of forests and soil carbon farming.

Biologists working with seagrasses met to present papers and discuss scientific practices at the 12th International Seagrass Biology Workshop (ISBW) (Conference website) in Wales 16th to 21st October. Just before the conference 122 scientists across 28 countries associated with the World Seagrass Association released a statement on the global importance of conserving and expanding seagrass meadows.

One of the main plenary talks was given by Australian researcher Dr Peter Macreadie. He highlighted the importance of Seagrass carbon storage globally and for Australia. Yet it seems few media outlets are talking about this conference, and none from Australia that I could find, even though Australian researchers are prominent in this field.

I have followed the career of Dr Peter Macreadie for a number of years. See my 2011 article on Coastal ecosystems suffer 100 fold decrease in capacity to store carbon mitigating climate change.

The capacity for seagrass meadows to store carbon has interested me since then resulting in articles in 2012 on (Seagrass meadows are key carbon sinks for combatting climate change) and 2013 on Seagrass projected to drastically decline with sea level rise.

The work that Dr Peter Macreadie and his team at the Blue Carbon Lab at Deakin University in Victoria is extremely important.

In a Deakin University media release Macreadie called for the implementation of global carbon pricing to show both the economic and environmental benefit of seagrasses.

“Unfortunately seagrasses are not a charismatic species and are often overshadowed by coral reefs, but the work they do is massive,” Dr Macreadie said.

“Seagrass meadows account for more than 10 per cent of the ocean’s total carbon storage, and per hectare they hold twice as much carbon dioxide as rain forests.

“Seagrasses are among the planet’s most effective natural ecosystems for sequestering carbon; but when degraded they can leak ancient carbon into the atmosphere and accelerate global warming.

“We’ve already reached a point where at least 50 per cent of seagrass beds have disappeared, and that’s through human impacts like land run-off, coastal development, over-fishing and dredging. More needs to be done now to protect these delicate ecosystems before it’s too late.” he said.

The heavy lifting in ocean carbon sequestration – or blue carbon – is done by just three habitats: seagrasses, tidal marshes and mangroves. These three ecosystems occupy only 0.2 percent of the sea floor yet they sequester more than half of the oceans carbon. They provide substantial environmental services including:

Macreadie highlighted that there are 40,000 hectares of deepwater seagrass meadows around the Great Barrier Reef. Who knew?

They are busy trying to “put a dollar figure on seagrass”.

Their goal? Working towards saying to the Prime Minister: “Here we have an innovative solution for helping to mitigate climate change while contributing jobs, improving natural capital, improving community well being.”

“We want to be able to say that for every $1 million invested in seagrass conservation and restoration, you are going to get $10 million of benefits back to our economy.” said Macreadie.

There are three steps in this research:

“We are developing decision tools on blue carbon under different management scenarios.” he said.

Mapping is one really useful tool identifying blue carbon hotspots. This can help avoid destructive marine coastal developments at the planning stage, saving those sites which are strong in carbon sequestration.

Macreadie outlined that seagrasses globally store about 19 petagrams of carbon.

But Seagrass carbon is also vulnerable to disturbance in three distinct ways: mechanical, biological, and chemical.

Disturbance can mean ancient carbon locked up is released to the atmosphere. Yes, a type of carbon bomb. (See Macreadie etal 2015, Losses and recovery of organic carbon from a seagrass ecosystem following disturbance)

Macreadie outlines that there are indications that in areas where you have higher predation, such as more sharks, you are likely to have higher carbon stocks. Yes, sharks might be an ecological influence on carbon sequestration.

This is another reason we shouldn’t mindlessly slaughter sharks, or use drumlines to attract, then kill them for our own limited safety at when beach swimming.

How do we better manage our coasts? This is the slide that Macreadie talked to: 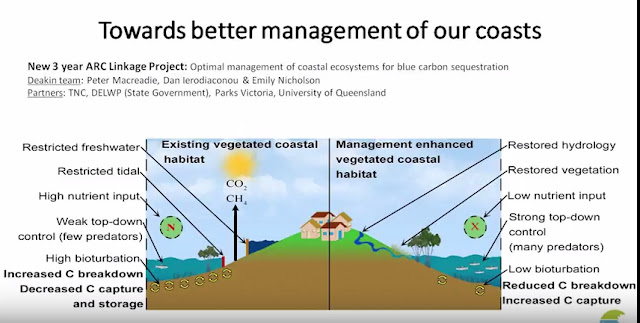 Australia has leading research on blue carbon. If there is one positive aspect in Australia’s climate wars, it is that both major parties see an essential role for biosequestration of carbon, although most emphasis has focussed on soil carbon farming to date, which scientists say has a limited capacity.

The Paris Agreement says that we will need to balance sources of emissions with carbon sinks by the second half of the century. This will require negative emissions, either through technologies not invented yet or through natural carbon sinks such as through afforestation, soil carbon farming and blue carbon. But growing carbon sinks is no substitute for reducing emissions by phasing out fossil fuels. This is made clear in a new report by European environmental NGO Fern in their report on Going Negative, How carbon sinks could cost the Earth.

“When you look after seagrasses you also stabilise coastal areas, improve fisheries and maintain important animal habitat and feeding grounds,” Macreadie said. “At the moment there is a severe lack of resources and funding to do on the ground restoration of seagrass meadows. Eventually there will be none left if nothing is done, but the carbon pricing mechanism offers us a great way to turn that around.”

The question that should be asked: Seagrass is a marine powerhouse, so why isn’t it on the world’s conservation agenda? (The Conversation 10 October 2016)

As sea level rise due to thermal expansion of the ocean and Antarctic Ice sheet mass loss, our coastal ecosystems will be challenged to adapt. We might need to assist with our Planners needing to allow for Coastal wetlands migration due to sea level rise, climate change. It’s not just an Australian problem with the World Bank identifying Coastal Wetlands globally under threat from Sea Level Rise.