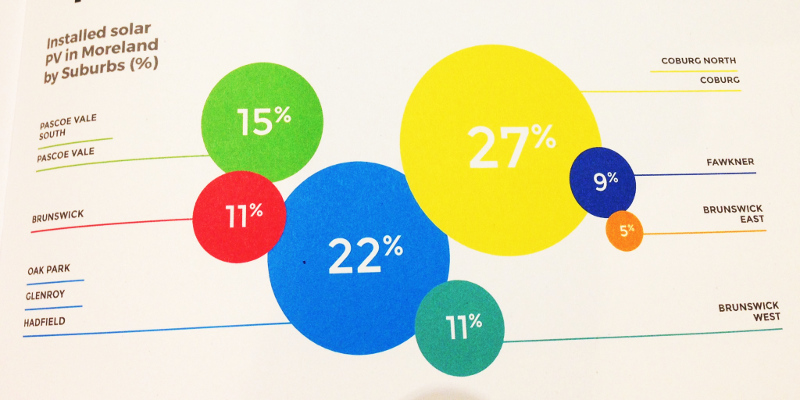 SolarPV installed in Moreland in Melbourne’s inner north (via MEFL)

New solar feed-in tariffs (FIT) are being introduced by the Andrews Labor government in Victoria, based on the time-of-day – peak, off-peak and shoulder – which better reflects current electricity pricing. The new tariff structure will also compensate solar households with a tariff component taking into account the environment value of greenhouse gases avoided.

Victorian Minister for Energy, Environment and Climate Change Lily D’Ambrosio announced the changes as a fairer way to pay people for the solar and wind power they produce for the electricity network.

“Victorians should be fairly compensated for the power they generate – plain and simple.” said Lily D’Ambrosio.

“Households will now be compensated through the most cost effective and fairest system available, which is through a time-of-use feed-in tariff.”

The revised scheme follows the Labor Government accepting the major findings of the Essential Services Commission’s Final Report into the Energy Value of Distribution Generation (PDF), which was tabled in Parliament in September.

One of the recommendations of this report was that annual minimum rates for feed-in tariffs will permanently move from calendar years to financial years to allow retailers time to adjust their systems.

This means the new feed-in tariff rates will commence from 1 July 2017.

The current minimum feed-in tariff rate of 5 cents per kilowatt hour (c/kWh) applies from 1 January 2016. The new rate will likely be 6.5C to 7c average including the envoronmental component, and 8c per kwh for peak times (3pm-9pm). The new FIT increase is still way below the average grid supply rate of 25c/kWh.

Positive news from #SpringSt: Solar Feed-in-Tariffs will increase from July next year. @VictorianLabor continue in strides toward renewables pic.twitter.com/Xk2uUMnbI0

“This is the first time the tariff has been increased in the last 6 years, rising by approximately 20 per cent. It fell every year under the Coalition.” said Lily D’Ambrosio.

The environmental component (Deemed Output Tariff (DOT)) recognises the greenhouse gas emissions avoided when distributed generation displaces centrally dispatched electricity. It is not clear whether this will be included from July 2017, or July 2018 as recommended in the Essential Services Commission report.

@LilyDAmbrosioMP when does the Deemed Output Tariff (DOT) for GHG avoidance come into effect with new solar FITs? Is it July 2017 or 2018?

Existing base solar feed-in tariffs in Victoria for new solar customers range from 5 to 10 cents per Kilowatt hour, with most retailers offering towards the lower end of this scale. (Solarchoice price comparison 11 October 2016)

Pressure group Solar Citizens has welcomed the move as a significant improvement to the way rooftop solar and other ‘distributed renewable energy’ is valued.

“This is a first for Australia and indeed the Victorian Government is leading the world with this announcement to better value the benefits of rooftop solar or distributed renewable energy,” Reece Turner, Consumer Campaigner for Solar Citizens said.

“These changes will ultimately lead to solar owners receiving more value from the clean, efficient electricity they provide to the grid and increase the incentives for people to add solar which is providing cheaper, cleaner electricity to all consumers.

“These changes will result in relatively modest gains for solar owners but they do set the stage for a fairer and more reflective assessment of the value rooftop solar brings to our grid,” he said.

Reece Turner articulated that solar offers incredible benefits to our electricity grid in providing cheaper, cleaner, more efficient energy during times when demand, and system costs, are much greater.

“Coupled with battery storage, rooftop solar also has the potential to provide a more robust, decentralised electricity supply. Until now, these values have not been realised,” he said.

In Victoria base feed-in prices were slashed to 5 cents per kW/h by the state’s Essential Services Commission from January 2016, with much criticism by renewables lobby groups, according to Renew Economy in August 2015.

The announcement provides Victorian solar feed-in customers a much fairer system in sharp contrast to solar rooftop customers in other Australian states.

“This Victorian announcement sits in stark contrast to the flailing policies of other States, particularly NSW which has a zero minimum feed-in price for solar and in South Australia where the regulator is proposing to remove the minimum feed-in price.” said Reece Turner.

“The Queensland Government is sitting on a report it commissioned into a fair price for solar but the draft report failed to recommend any changes.” said Reece Turner.

Transitional Feed-in tariffs are ending for over 275,000 solar households in NSW, SA and Vic between September and December 2016. This change means that many people are considering incorporating battery storage to better utilize their own power generation, although return on investment with home battery systems is still more than 10 years.

For the 67,160 Victorian households on a transitional solar feed-in about to expire this year, the changes herald an initial spike in costs, before the new arrangements kick in next July.

For those Victorian households who installed solar for the environmental benefits in reducing greenhouse gas emissions, the new Deemed Output Tariff (DOT) will be welcomed as positive recognition of households taking climate action.