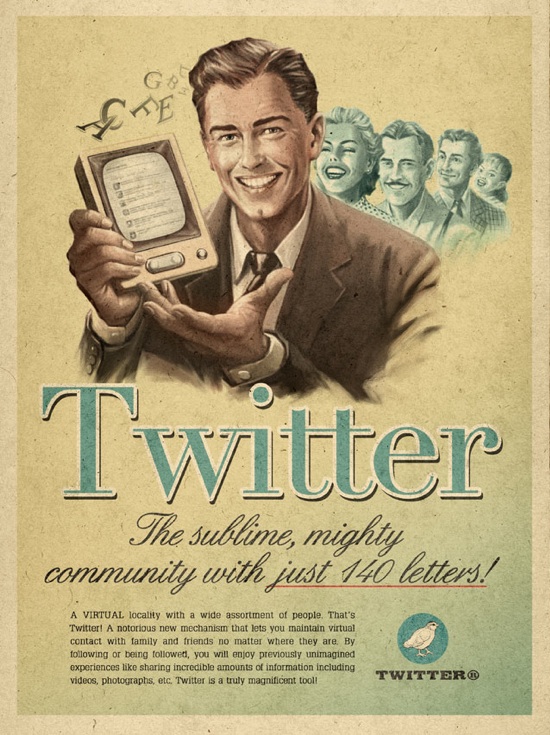 I signed up to Twitter last year but, in the field describing myself, typed in ‘Twitter sceptic’. I signed up for a specific reason: I wanted to do a class experiment where my politics students could tweet me questions during a lecture I was giving on politics and new media. The idea was that I could answer the questions or engage in a conversation as I went along.

Nice idea but the experiment didn’t go well! After I put the Twitter feed of our class hashtag up on the big screen behind me during my lecture, up came the ‘flames’ and off-topic posings (sample: ‘Julia Gillard: whatabitch’; ‘… After Exams Party anyone?’).

So, I’m willing to admit that bad first impressions may have coloured my opinions somewhat!

And, while we’re on confessions, I’m also happy to acknowledge that I am a pretty inept user of the medium. I find Twitter difficult to navigate and even to understand. Confusingly, Twitter is both a form of personal communication between individuals and a broadcasting medium at the same time (which helps explain why people get themselves into trouble on Twitter because they say something silly when they’re pulled along by its faux-intimacy).

To the novice tweeter, it also seems much like any other large social gathering or schoolyard – a mix of friendship, support, useful information and interesting views, punctuated by inane comments, crass self-promotion and the odd spot of bullying.

My attitude to Twitter also undoubtedly reflects my personality. I am not social in the way social media defines ‘social’. I feel no need or desire to frequently tweet my thoughts and experiences. So anyone who follows me on Twitter will be met with infrequent postings of not much.

But now that I’ve confessed my own experiences and shortcomings, I can get to the bigger problems with Twitter and those problems are less about the medium itself than about the huge hype surrounding it – the big claims and even bigger expectations about Twitter.

The hype stems from around 2009-2010 when many journalists discovered Twitter and began heavily promoting it in news stories. This was especially the case for print journalists who gravitated towards Twitter because it is a medium that ‘restored the centrality of the written word’ and allowed them to compete in the breaking news arena with 24-hour TV news. As ‘wordsmiths’, they have ‘a comparative advantage in making the best use out of Twitter’ for breaking news and promoting stories (Ahmad 2010).

But the hype about Twitter was so over-the-top that a study of the Guardian newspaper found its ‘remarkably flattering discourse’ about Twitter hovered ‘uncomfortably close to the border between journalism and advertising’ (Ahmad 2010). Journalists were promoting Twitter in such a celebratory and uncritical way that Ali Nobil Ahmad concluded that the question ‘is Twitter a useful tool for journalists?’ should be flipped so that we instead ask ‘has journalism become a useful “tool” for Twitter’?

One of the ways information capitalism has prospered in the new media era is by the remarkable success of corporate social networking sites to recruit labour to provide content for them – including YouTube, FaceBook and Flickr. Users put a good deal of labour, creativity and maintenance into these sites while the companies behind them profit from the unpaid labour of their content-makers.

The interesting economic story about Twitter is that, in media tech company terms, it has been a financial failure in terms of capitalising on its massive user base. But in 2012, it began a determined push to change that by focusing on advertising. And Twitter now charges companies up to $120,000 for Promoted Tweets or $200,000 a day to buy a Promoted Trend. It’s been reported that Twitter expects to reach $540 million in ad sales in 2014 capitalising on its massive asset base of over US$220 million.

This relationship between users, content, free (but corporate) technology and the future of journalism interests me but so does the biggest fallacy about Twitter. The same fallacy was made about chatrooms, then blogs, then FaceBook – that Twitter has revolutionalised political participation.

Again, it’s the hype that has been the problem. Not a lot of academic research has yet been done on Twitter, but what has been done suggests that Twitter, like the internet in general, has largely been normalised into the traditional political and journalistic worlds with existing problems and inequities continued online.

Some of the conclusions of several different studies are:

I’m much more interested in these issues than the oft-heard criticisms of Twitter as focusing on the trivial or being shallow (the oft-lamented concern about what can be meaningfully said in 140 characters?) and I find it quaintly old-fashioned that anyone is concerned about Twitter being subjective or unverifiable. But there are interesting debates to be had about the way Twitter has increased the speed of the newscycle (which it undoubtedly has).

As a result of both 24-hour TV news and Twitter, stories seem to emerge faster and burn out faster (blue ties anyone?). I can see that this has implications for the ‘breaking news’ focus of modern media and the focus on the ephemeral and the episodic at the expense of context and perspective.

But I can also see the good that Twitter can facilitate in some areas – particularly in the way Twitter can be used as a collaborative research tool (although I see less of that happening and much more use of Twitter as a marketing tool).

So, having said all of this, I’ll conclude by noting that my scepticism about Twitter is balanced by an enthusiasm for new outlets that use new media to provide competition, independence and diversity in news reporting. Margo Kingston is a pioneer in this area in Australia. So, Twitter sceptic or not, I wish her every luck with her twitter-based election coverage. It will be a very welcome addition to the political reporting landscape and, I am sure, a much more successful Twitter experiment than mine!