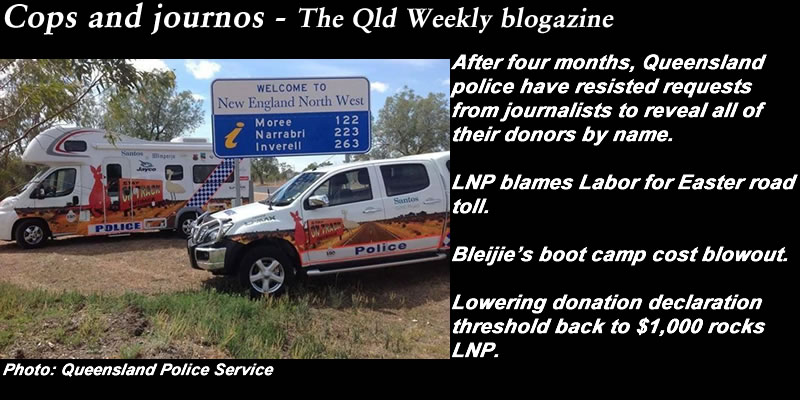 The week in Queensland politics. 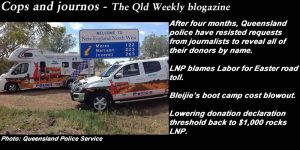 Much of the week in Queensland politics was dominated by the Billy Gordon case. We’ve covered that at a separate @NoFibs blog, “The media trial of Billy Gordon”. So, what else happened on the weekly political landscape?

However, a full and frank disclosure was thwarted this week with the release of a dossier showing money received but without the corporate names to match the amounts. The document did show sponsorship where the name of the corporation was included in the title, for example, “The Courier Mail Police Scholarship”.

New Queensland Police Minister Jo-Ann Miller took a moderate approach to the cops and journos dispute and ordered that all future sponsorship be fully declared. However, police command will not have to reveal anything further on past transactions.

Lowering the threshold back to $1,000 rocks LNP

Not now, not ever – Make domestic violence a crime

Eammon Atkinson reports: The review into Queensland’s embattled greyhound racing industry is now being upgraded to a Commission of Inquiry.

The LNP opposition says the ALP "dropped the ball" on road safety ahead of Easter #qldpol pic.twitter.com/adlVmrjQlJ

And here @scottemerson proves (yet again) there is no depth low enough the @QLDLNP won't sink to. #qldpol http://t.co/RKsTBmP9ZY

Eammon Atkinson reported: Queensland’s former Attorney-General Jarrod Bleijie is at the centre of a scathing audit into his boot camp program for juvenile criminals.

I stand by my decision on boot camps and I'm for outcomes. They're working to help hundreds of young Qlders. #Qldpol pic.twitter.com/r5FOmQcgpt

Bleijie is using old figures. Sadly as at 7/4/15, 56% of sentenced boot camp youths have since been charged with new offences.

VLAD fine for having a beer at the pub, charges dropped