Tax exempt status of Environment NGOs targeted. Are you a #FriendofFoE? asks @Takvera 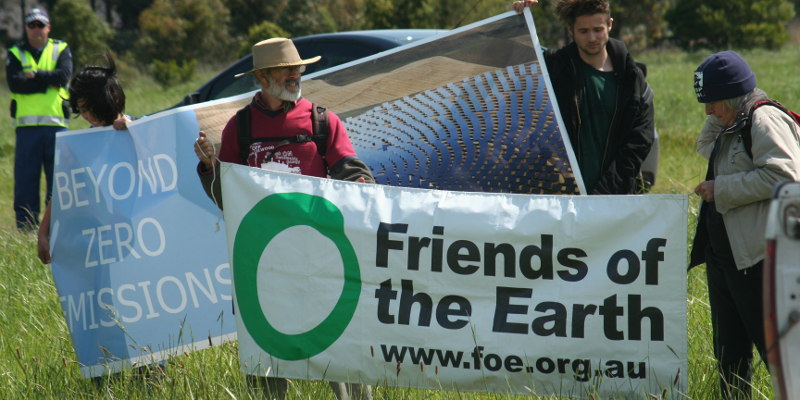 Hundreds of thousands of Australians each year volunteer with or donate to environment not-for-profit organisations like Greenpeace, Friends of the Earth, the Wilderness Society, to name just a few. Now it seems the Federal Government is stepping up it’s attack on these organisations through tightening the definition and taxation exemption status for donations to these organisations.

Australians do believe in a fair go and are willing to support in both unpaid time and money the ongoing environmental work and advocacy of these organisations. Millions of dollars is contributed each year by individuals to support a wide range of activities, including ‘on the ground’ work, education and training, grassroots activism and protests, and political advocacy.

Their work and operation, with limited funding, means running campaigns often on shoestring budgets with limited paid staff and high reliance on volunteers. Their work is a vital component of democracy and free speech in Australia.

Often their opponents in business or mining, or government bureaucracies, have engaged high profile public relations and legal teams with substantial budgets.

Cam Walker from Friends of the Earth outlined the threat on the ABC 7.30 Report (Environmental groups face tax deductibility loss in Government push): “I think like every environmental organisation across the country that employs staff, tax deductibility is the lifeblood of our organisation. So if the Federal Government is successful at getting through its attempts to cut off groups from the register, it will basically mean the political death of our organisation.”

and if Coalition gov does take our tax status away, it will be harder 4 us to support these communities #FriendOfFoE https://t.co/G11xwL4zJ4

Many environmental organisations rely on their tax-deductible status for donations, especially as the Abbott Government has slashed direct funding since coming to power in September 2013. ($1.3 million slashed in 2014 budget to Grants to Voluntary Environment, Sustainability and Heritage Organisations)

In December 2013 the Attorney General George Brandis stripped all federal funding from Environmental Defender’s Office’s around Australia, in an effort to curtail disruption to mining and development being raised on conservation and environmental grounds through the court system. This was one of the requests of the Mining Council of Australia. Small conservation groups often use the Environmental Defender’s Office legal team to challenge inappropriate development.

While Government regulation has become more minimal with the winding back of redtape, challenging the legality of development conditions and approval process has now become more expensive for individuals and small communities to test through the court system.

You can see a comparison table as at 17 June 2014 by Environment Victoria of Federal Government activities helping or destroying the environment. While there are a few positives, these are counterbalanced by a very long list of negatives.

Charities regulator under threat of abolition

With the support of the not-for-profit and charities sector, the Gillard Labor Government established an independant regulator for the sector in December 2012 – the Australian Charities and Not-for-profits Commission (ACNC) – to supervise and assist the voluntary sector consisting of about 600,000 organisations and associations, and track and review the approximately 56,000 non-profit organisations with tax-exempt status.

The ACNC registers organisations as charities, assists them to meet their public obligations, and reviews activities for tax-exempt status as part of it’s regulatory role. It does on occasion revoke tax exemption status if an organisation’s activities are not aligned with charitable purpose and for the benefit of the public. Most recently it listed the ‘Get Rid of Sids’ organisation for revocation of it’s status.

If organisations do not submit an annual Information Statement for two years running (known as Double defaulters), their status is also listed for revocation. 1400 organisations faced tax-exempt revocation under this review by the end of March 2014.

The Abbott Government wanted to abolish the ACNC, but has not had the support of cross-benchers in the Senate to pass the necessary legislation. The assistant treasurer Josh Frydenberg said that although the Government had not abandoned it’s aim to scrap the ACNC, it has now been given a low priority, according to a Guardian report.

Friends of the Earth have made a statement saying that this Inquiry is a witch hunt, that The Coalition government is trying to silence anyone who stands up for the environment.

Friends of the Earth affiliate organisation, Counteract, which runs grassroots training for local communities in such campaigns as protecting farmland against coal seam gas development, also published a statement condemning the inquiry as a witch hunt. Last financial year this small organisation raised $15,000 in tax deductible donations, about the same amount as Liberal Party MP George Christensen spent in six months on office supplies and a collection of climate denialist books, all claimed as a tax deduction. Now their funding is under threat.

Alex Hawke MP commented on the 7.30 Report that Green groups “need to be subject to the same accountability and transparency as other sectors”, yet that is precisely what the ACNC does without any overt ideological and political bias.

Kelly O’Shanassy, the chief executive of the Australian Conservation Foundation, questioned the motivations of the inquiry telling the Guardian: “Advocacy creates a better country, it has helped create beautiful national parks, protection for the Great Barrier Reef and has helped recycling take off,” she said.

“I’m proud of what we do and I’m sure some politicians would be more comfortable if advocacy groups didn’t exist. But I don’t think they should be able to draw the line where it suits them just because they don’t like what we say from time to time.” said O’Shanassy.

This latest inquiry should be seen in the context of a larger conservative assualt to silence environmental advocacy work.

Joan Staples, Visiting Fellow in the Faculty of Law at UNSW Australia and a Vice-President, Environment Victoria outlined the series of attacks on environment organisations in a post at the Conversation in August 2014 (Step by step, conservative forces move to silence NGOs’ voices).

And while the tax exemption status of environmental organisations is threatened, the right-wing Institute of Public Affairs tax exemption status continues to draw funds from business groups and individuals, much of it hidden from public view. In 2012 Clive Hamilton, Professor of Public Ethics at Charles Sturt University, highlighted the shadowy nature of IPA finances and expenditure and called upon the Tax commissioner to “open up the Institute’s books to ensure it is complying with the law and to force on the IPA the transparency it demands of others.”

Are climate denialists behind the IPA driven attacks on Environmental NGOs? Who funds the IPA? http://t.co/kTQQ03k0sH #IPAagenda #abc730

Both the Liberal Party and the Labor Party have trusts that are listed as tax-exempt, yet their operation is not being scrutinised.

Let’s get this straight, environmental organisations act for the community benefit in making government and business more accountable for their decisions affecting the environment. Whether it be challenging mining exploration and development, industrial development applications, threats to native species and biodiversity, or a safe climate, these are important roles to be supported through tax exempt donations. The advocacy and political activism of environmental organisation is sorely needed to counteract those who prioritise economic growth and profit over community values and environmental sustainability.

Political activism and advocacy role of non-government organisations and their tax exempt status was considered in a case that the Australian Taxation Office brought against a small Foreign Aid advocacy charity called Aidwatch in 2006, while the conservative John Howard Government was in power. The case ended up in the High Court in 2010 which found an implied right of political communication for not-for-profit organisations, not inconsistent with their charitable status, under the constitution and case law. The case was celebrated by Aidwatch as a major win for Charities and their engagement in political advocacy.

To circumvent this decision the Government would need to propose changes to legislation, none of which is guaranteed to pass the Senate. Hence, the approach to change the definitions through the parliamentary inquiry.

A brief selection of tweets in support of Friends of the Earth #FriendorFoE.

Abbott wants groups like @FoEAustralia and @CounterActOz out of the way: it's up to us to support them: http://t.co/P8K66YZd9Y #FriendOfFoE

Don't always agree on solutions but definitely respect their efforts & achievements #FriendOfFoE , Cam & all who speak up for env & climate

I'm a #FriendofFoE coz I'm sick of billionaires who don't give a fuck about our planet. pic.twitter.com/F180NoWhSG

End of whaling in Australia? @FoEAustralia was there #FriendOfFoE #abc730

Without the amazing support of FOE, Vic wouldn't be Gasfield Free! I'm a #FriendOfFoE, are you?http://t.co/rRXX2n7u1o pic.twitter.com/lywZNqtUdU

We live in peculiar times when a campaign promoting clean, sustainable jobs is unfairly vilified as being "anti jobs". #FriendOfFoE #AuspoI

If you want to assist, Friends of the Earth Melbourne have put together a list of 5 steps every #FriendOfFoE needs to take.

Disclosure: I am a member of Friends of the Earth, on and off, since 1975, and also a member of the Australian Conservation Foundation, both of which have tax-exempt status. I am also a member of two unincorporated environmental groups: Sustainable Fawkner and Climate Action Moreland.