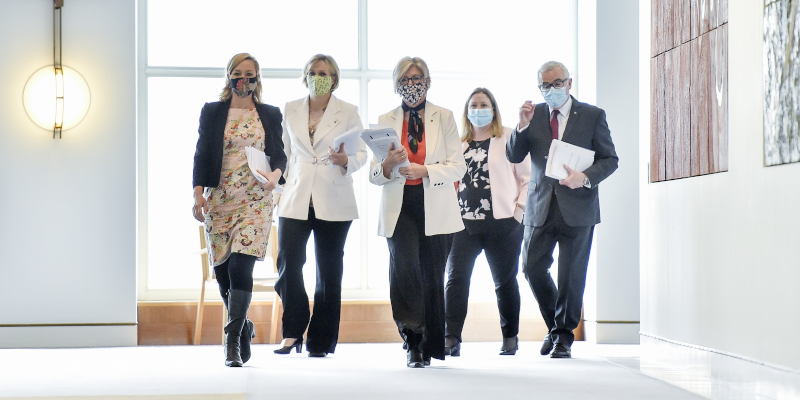 His dark humour grounded in passionate belief gave me a way to see a Queensland politics that had hope in it.

When I mentioned this on Twitter after Mungo died, several Tweeps said yep, that’s what they did and how they felt too.

My big cause now is the urgent need for a strong federal ICAC.

There’s only one way to make it happen, citizens in Coalition seats need to insist their MPs support the bill by Indi independent Helen Haines (now backed by Labor, the Greens and every cross bench Senator and MP except One Nation).

The Fitzgerald Royal Commission delivered Queensland from our Trump, contemptuous of media, promoter of fake cancer-cure gurus, jackbooter of opponents through his police.

His Country Party ruled by outrageous gerrymander for 23 years without any serious impediment to his government’s rampant corruption, law-less police force and stacked judiciary.

Our media was complicit.

My little story: Police misbehaviour became so grotesque Sir Joh set up a Police Complaints Tribunal led by a mate, District Court judge Eric Pratt. He never found a cop guilty and his findings were unreported.

Thanks to a gutsy chief of staff at The Courier Mail I reported a gob-smacking not guilty finding detailed in the Queensland Law Society Journal.

The police reporter’s ‘get off my round’ note landed on my desk.

I reported another gobsmacking innocent finding, and Judge Pratt invited the editor and the police reporter to the Tribunal off ice and, I was told, proved to them there was nothing amiss.

When the Sir Joh for PM movement took off , The Courier Mail sent reporters all over the State for reaction.

I went to the North Queensland town I grew up in, Mackay, and found that my ballet teacher and the pieman who sold us kids pies ’n peas and a bottle of Coke for lunch at school thought he’d make a good PM.

They knew nothing about the reality. They just liked him.

The paper’s Phil Dickie tried to break open the overt prostitution and illegal gambling rackets operating under police protection in the Valley in Brisbane, but his work was legalled into an incomprehensible mess.

The uber-corrupt minister for everything, Russ Hinze, said there was no prostitution or illegal gambling in Queensland and that was that.

But when the ABC’s ‘Moonlight State’ documentary definitively proved the big lie, while Sir Joh was overseas, his deputy called the Fitzgerald Royal Commission.

Tony Fitzgerald slowly, transparently opened Queenslanders’ eyes and took us all with him – including my ballet teacher and the pieman – to transform our State electorally, and politically, with a Crime and Misconduct Commission, because he earned our trust and became the most admired man in our State.

He paid the price. Of course he did. He lost his precious privacy, and his destiny, to be a High Court judge, was thwarted owing to National Party animus.

The current federal government is deeply corrupt, and everyone who takes an interest in politics knows it.

It’s a protection racket for politicians and public servants, yet another #ScottyfromMarketing scam.

I was going to write about all that, but a day after agreeing to write for The Echo, the world watched the humiliation of America’s deeply corrupt democracy.

I was in our Parliament as a reporter in 1996, when renegade protesters at an ACTU rally forced their way through the front door.

It was frightening – 90 people injured – but they were never a chance to enter the Parliament or MPs’ offices. They didn’t get past the public foyer.

Yet this ‘mob’ from the US – which included GOP state MPs, off duty police officers, defence force veterans and company executives – stopped certification of the presidential elec-tion, trashed the Speaker’s office, occupied the Senate Chamber, and defecated in the seat of power in the world’s most powerful nation.

It was one of those days, like S11, when you’ll remember where you were when the world changed.

I’m still in shock. America is in free fall as its viciously authoritarian rival for world leadership spreads its wings. Scary times for Australia as we face climate change horror.

Queensland had its Trump, and we emerged and thrived owing to the ABC and a Royal Commissioner we trusted and empowered.

We cleaned up our system and became a real, vibrant democracy.

If Australians believe democracy is the best way to survive the dangers ahead, we need to clean it up. We need to elect people to federal politics who want to serve the public interest, not themselves. We need a federal ICAC led by a person we trust. We need a strong ABC.

Only we can make it happen.

Politics as entertainment is over. Time to get serious. As Mungo always, always, was.