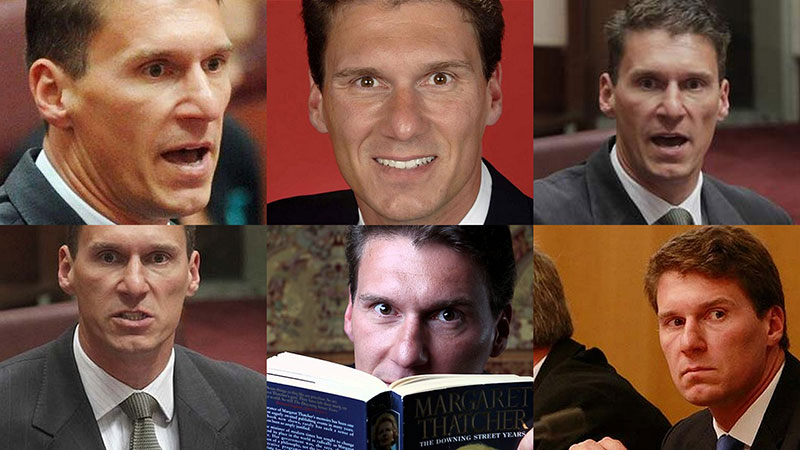 The Conservative Revolution hit the internet in a storm of outright criticism. Twitter was awash with Senator Cory Bernardi. The book became the Australian political punching bag of Amazon.com, with mock reviews serving as comedic outlet for many citizens’ frustration with the current Australian government. The reviewers mostly admitted not having read the book, nor wanting to, and ranged in content from the point of view of a dachshund to a recommendation that the pages be best used as lining for the birdcage.

No Fibs put out a call for someone to actually buy, read and review the book, and for some reason, this appealed to me. I’ve read The Conservative Revolution, and I lived to tell the tale.

The first thing I noticed about this book was that it’s hard to find. My closest bookshop closed a couple of years ago, so I tried an outlet I consider to be mainstream – Target. After all, Bernardi considers this work to be about mainstream values. However, with my inner-city franchise devoid of Bernardi, deeper into the suburbs I needed to go. I found a QBD, hopes high that I could purchase and be on my way. I looked at the floor-to ceiling displays of new releases. No Bernardi. Not in the Bestsellers either. Clearance sale? Not even. Having driven half an hour to Westfield, I wasn’t about to be beaten. As I trawled the department stores, I’m started to wonder, not entirely for the first time, had this response to Bernardi’s book been the result of a rather intense marketing strategy to invoke interest where otherwise none would exist? Judging by its scarcity, it seemed that not many people had read the book. Incendiary it might be, but influential it was apparently not.

I asked Bernardi himself via Twitter where I could buy it. No response. I contacted the publisher for a review copy. Again, silence. I could only find this book distributed on Amazon.com and Connor Court Publishing’s own site. Perhaps it would be available in the city CBD? I grew quickly tired of trying to find it and purchase through the publisher, and so my review was delayed a week while I awaited delivery. By this point I even doubted that there was a marketing strategy involved in The Conservative Revolution.

So, to the work itself. Bernardi is a man who has considered his position – indeed over many years – and is obviously passionate about it. As the title indicates, he is conservative through and through, espousing his belief in ‘principles and values that have successfully guided mankind and our society since the dawn of time’. He believes in absolutes, right versus wrong, no shades of grey, fifty or otherwise (eleventy?). Bernardi is on the side of right and good, proven through time (variously described as since the dawn of time, and over the last two centuries as conservative theory has been developed).

Bernardi has developed his thought on conservatism into four pillars; Faith, Family, Our Flag, and Free Enterprise, with Freedom and Future rounding out the last chapters. It is not by accident that he places Faith first in the order of pillars. In one of the most telling passages, Bernardi reveals that he sees faith as the only barrier to atrocity: “As we see the desolate wasteland of destruction strewn across last century, we cannot but notice that the overwhelming majority of those atrocities were committed in the name of ideologies dedicated to pure science and rationality, from Nazism to Soviet and Chinese Communism.”

Having just completed a PhD, I found myself applying the same kind of blowtorch critique and editing that my writing was subject to, and my initial impression was that this read like the first draft of an honours or masters essay. Actually, it read like a very long, quite unbalanced, undergraduate essay. While he clearly had researched his position, and ticked the conservative boxes of ‘pro-life’, ‘free enterprise’ and ‘Christian belief’ (with a few seemingly unnecessary kicks at Islam thrown in) he overwhelmingly used inflammatory and heightened language to describe the social degradation that he sees as the reason and purpose of the existence of the Left; “the cultural Marxists who seek to control almost every aspect of our society.”

It all went downhill in the 1960s, according to Bernardi, when the ‘social revolution’ caused more harm than good.

“It is no coincidence that, as the attack on our moral customs and traditions has gained momentum, our society has experienced an overall state of decline. Noticeable symptoms include a general sense of detachment from community, a reduced level of public service, higher crime rates, increasing levels of poor health, loneliness, relationship breakdown and child abuse.”

As he continued in this vein, I wondered if Bernardi had considered the possibility that these problems always existed in society, but were not talked about and debated as much as they are today? Bernardi later slammed discussion of economic inequity, for example, as an instance where the ‘morbid’ Left are consumed by politics of envy.

His statistics don’t always add up – it has been noted in the media that his estimates of abortion rates are inflated, and he tears into the conditions that produced the Global Financial Crisis with all the passion of a ‘Leftist’ without seeming to notice that they were set in place by conservative governments.

In fact, he often describes concerns that the Left also have, conversely blaming them for the issues. It is in these passages that this reader despaired over the present state of binary oppositional politics, where the same concerns can be shared, but no progress can be made, because each side is too busy vilifying the other. For example, he provides a very lucid account of Samuel Francis’ ‘anarcho-tyranny’, a state where: “Authorities crack down on the law abiding citizen with ever-intrusive laws and regulations while they become impotent to deal with social dissolution and the very real and much more threatening problems it poses. Perhaps this is because a political elite that has become morally bankrupt and unable to deal with real problems will try to overcompensate by focusing on secondary, perhaps even trivial issues, or invent controversies so as to be seen to ‘do something’.”

Fascinatingly, Bernardi does not appear to acknowledge that these are many of the same criticisms his reviled ‘Left’ level at the Abbott Government in which Bernardi serves.

And for the record, Bernardi is aware that the words ‘conservative’ and ‘revolution’ do not seem immediately compatible and also acknowledges that members of both the Left and Right can identify as conservatives: “modern conservatism, while perceived as a counterweight to the political left, is much more that what popular commentators will label ‘right-wing’ politics”. He throws in a few passages that conservatism is kinda fluid and flexible, it allows for disagreement and complexity. Bernardi does understand complexity, but his caricature of the concerns of the left stop his work from being intellectually sound: “Indeed, the conservative may even reject the ‘right-wing’ label as being incompatible with freedom, order and the interests of society for the simple reason that conservatism eschews ideological tendencies be they of the left or the right”. These moments that offer a glimpse into some more productive political collaboration seem few and far between. Bernardi allows his assumptions and lack of rigorous research to interfere with the progress of his theory.

By the end of the book, I found myself wishing Bernardi would give a guest lecture and tutorial to a first year Cultural Theory or Philosophy class. In an environment where ideas can be discussed freely and without the negative emotion he puts into deriding the Left (who, incidentally, he considers are themselves the purveyors of negativity), I think Bernardi would find many thinkers of all sides might share some common ground. Indeed, he might reduce the fear of the other that he admits drives his conservatism, quoting John Kekes: “A natural attitude that combines the enjoyment of something valued with the fear of losing it”. I think it is interesting to apply that quote to environmental protection and see what happens. Never mind unpacking his use of the word ‘natural’. I’ll leave that to the imaginary class he guest lectures. They can also deal with the passage in which he describes “Rousseau, J.S Mill, Marx, Freud and their acolytes”. The final three words erasing decades of critical thought and debate around all such theorists – often from those of the Left.

Bernardi is not a terrifically engaging writer, his soap-box passion merely reveals predictable positions and his binary opposition removing any capacity for interesting moments. The Conservative Revolution is a hard read, technically as well as politically. It burrows its nose so far into political binary opposition that the world view becomes a cloister of bitterness towards the perceived power and influence of the ‘other’ (the Left). This book is a symptom of a political climate that discourages engagement between sides, opinions and beliefs. Around and around we go, in eternal argument and fear of one another.