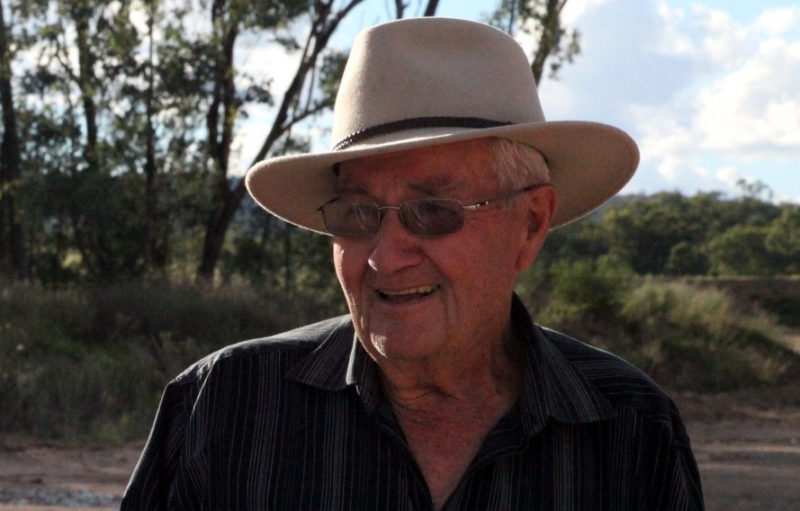 Bevan, 81, is a retired wheat and cattle farmer and the deputy Mayor of Narrabri Council with three sons and three grandchildren. “My hobbies are studying world and domestic politics, and my interests are my family and the farming world.”. I spoke with him this morning after he revealed improper use of the Rural Fire Service by the Council to evict the #leardblockade camp from a road reserve and lodged a motion to rescind council’s decision.

Margo: You seem to be alleging abuse of the Rural Fire Service (RFS) for an improper purpose by the mayor to eviction the blockade – is that right?

Bevan: We (the Council) are using them actually as as third party. We had a letter from a Jim Casey, the union secretary of the RFS in Surry Hills in Sydney, and he stated pretty plainly that we were using them to get where we want, and it’s really a third party. The crux of the matter is that protestors in the Leard Forest have been there for 17 months and people have been helping them – and all of a sudden they’re the bad boys.

Margo: What is your position on the coal mine at Maules Creek?

In the short term it’s going to make a lot of money for the state government but in the long term it will destroy the agricultural industry in the area. Agriculture is sustainable forever, and it’s improving – the crop yields are improving in the agricultural world. Mining is a finite industry, and when mines finish you’ve a big hole. It will have devastating effects on the irrigators downstream of the area, because you’ll have some pollution and I believe it will lower the water table by 10 to 11 metres (due to mine’s water use).

In the bush it’s about 98 per cent against coal seam gas and coal, but in the town…

Margo: I was interested in your praise for the protesters, because there’s a lot of people in Sydney saying: ‘They’re all just feral, this and that’ –

Bevan: There are some very sensible people at the camp, with university accreditation. They’ve earned the respect of the people, because locals are giving them fuel, wood, groceries – they always call in on their way to town – ‘Can we get something for you?’. People wouldn’t do that if they were ratbags, not after 17 months anyway. Seventeen months at a camp is a long time.

Margo: Is it true you voted Green after a lifetime voting for the National Party?

Bevan: Yes, I voted Green at the election for the first time ever. I think they’ve got more of a grip. I’m not a greenie at heart, but the reason is that the Greens do look at the sustainability of agriculture. Maybe they’re getting votes, maybe they’re using this as a ploy, but so what? A lot of people use things as ploys, don’t they?

Bevan: What’s happening  in this shire is disgusting. People don’t realise what an industrial shire we will end up as. It will all be very grubby – look at Singleton, and Muswellbrook particularly. The (NSW government) ‘Matters of State Significance’ laws should not allow a state government to overrule a Local Environmental Plan (LEP). They pulled this project in to rule the council out of the equation.

Plenty will be said and written about this week’s swift action by Narrabri Shire Councillor Bevan O’Regan, who managed to block the Council’s attempt to evict protestors from two mining areas in NSW’s Leard and Piliga state forests.

“As a council we have stooped to gutter politics in an attempt to achieve a desired result,” Cr O’Regan said. “The protestors at the camp are protesting in a passive manner. They have been there for about 17 months and have survived on donations of fuel from farmers, as well as water, firewood and groceries from the general public as they call in on their way to Boggabri to shop”.

“In my 31 years as councillor, I have not seen any attempt by the Narrabri Council to circumvent normal council procedure to achieve a political result as the actions that has surfaced in the last 48 hours.”

No Fibs is pleased to publish Rosemary Nankivell’s account of the man behind the last minute reprieve for the #Leardblockade.

There is a certain style of country bloke very much in the character of the heroes of A.B. (‘Banjo’) Paterson’s poetry.

They are generally men of honour, highly-principled, determined and exhibit a marvellous knack of being able to achieve a goal in an unorthodox manner.

They are simply spoken, clever and known to get the job done.

They have a deep love of the land and are keen judges of horseflesh and other stock.

They are masters of understatement, usually possess a wicked sense of humour and have a questionable tolerance for the status quo. They also believe deeply in a fair go.

Bevan O’Regan is of this ilk.

As a child I competed many times in pony club events where Bevan, an active community member, was the President of the Narrabri Pony Club.

He was a stickler for rules, worked passionately at all levels and did many jobs others avoided.

There was a generally feeling for those of us from competing clubs that Bevan was ‘the man’ – Mr Narrabri in fact. As such, we pony club members were keen to keep a distance.

Therefore, it was with trepidation that I found myself sitting alongside Bevan at a federal inquiry into the impacts of coal seam gas extraction in the Murray-Darling Basin, held within Narrabri’s Crossing Theatre forty years later.

Judging by the twinkle in his eye, he was clearly amused to see me there. However, as we both shared a love of the land and deep concerns about the impacts of the extractive industries on the water resources of this region, the day improved quickly.

One of his quotes – “an aquifer knows no boundaries” – has stayed with me ever since.

Narrabri, a pretty country town in a comfortable agricultural region, is experiencing the challenges of adapting to the development of coal and coal seam gas industries.

The power of mining interests, hand-in-hand with a compliant and largely unquestioning council, have resulted in the community losing its faith in due process and questioning the transparency of the council and its actions.

Many perceive Narrabri Council as a tool for the mining interests and, increasingly, as a vehicle for those council members with political aspirations.

It is not surprising, then, that at the recent council elections, Cr O’Regan won the majority of primary votes, far outpolling the sitting mayor.

Councillors such as Bevan O’Regan, who are genuinely trying to serve the people, are a welcome change.

Rosemary Nankivell is a Liverpool Plains farmer who is concerned about the protection of farmland and water resources.