Unemployment in the regions.

ReachTEL poll shows loss of SEQ to the government.

Tempers Freya: During an electrical trades union protest against asset sales in the Queensland state electorate of Stretton, the local Liberal National Party (LNP) member Freya Ostapovitch, lost her cool with the media.

She jumped out of her car to remove a traffic cone and bag that had been left in a parking space. In a huff, she hastened toward ABC News Queensland reporter, Chris O’Brien, and hurled the items in his direction. She then returned to park her car.

Alighting once again, she was jeered by the protestors. Raising her nose in the air, she swung a Maroons scarf around her neck and strode triumphantly into the building with hands raised.

Most recently, Ostapovitch informed the Queensland parliament that abortion increases the risk of  breast cancer.

Unemployment in the regions

Queensland regional unemployment was released from Treasury and Trade this week with two areas breaking through the 9 percent barrier. Morton Bay – North rose to 9.2pc. It was followed by Ipswich which jumped to 9.0pc. Other rises occurred for Wide Bay up to 8.7pc, Cairns to 8.2pc, Sunshine Coast to 6.6pc, Townsville to 6.7pc and Logan – Beaudesert region to 6.6pc.

Queensland’s trend unemployment has risen from 5.5pc in 2012 when the Newman Government first came to power, to the current 6.3pc.
Read more on the rising unemployment problem at the @NoFibs report; “Unemployment at 6.3 percent, the Qld labour force monthly update”. 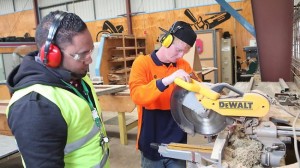 In a major policy announcement ahead of the 2015 election, Opposition leader Annastacia Palaszczuk pledged to restore the successful “Skilling Queenslanders for Work” program that was axed by the Newman Government in 2012.

In 2012, a Deloitte audit report found that the employment and training program was generating billions of dollars in state revenue for the Queensland Government.

“The report prepared by Deloitte Access Economics found the $53 million Skilling Queenslanders for Work (SQW) program would have generated $1.2 billion in state tax receipts in the years to 2020.”

The program aims to bridge the gap between those with low experience/training with suitable employers.

ReachTEL poll shows loss of SEQ to the government.

A ReachTEL poll conducted for @7NewsBrisbane has found that 60.7pc of Queensland believe they will be worse off after both the state and federal budgets.

The two top areas households intend to cut back on in Queensland are holidays with 36.7pc of respondents and dining out at 25.2pc.

The age group, 18-34, is the set most likely to perform the cut backs with most pensioners all ready under strict budget controls.

You can read more about the results here.

In a separate ReachTEL poll conducted for the Together Union’s Working for Queenslanders has shown that the LNP are unlikely to hold onto South-East Queensland (SEQ). On first preferences, the LNP leads with 37pc of the vote followed by Labor on 32.6pc.
Palmer’s United Party has presented in the teens for the second time since it formed with 12.3pc of the vote.

Senior lecturer in politics and journalism at the University of Griffith, Dr Paul Williams told Brisbane Times reporter Amy Remeikis he expected a 10pc swing away from the government, mostly to Labor and PUP.

“If you looked at the LNP first preference state wide vote, it has come down by about 12 per cent,” he said.

“Looking at the Palmer vote, it has increased by 12 per cent. Of course it is not that cut and dried, there would be voters who flirted with the LNP who have gone back to Labor and Labor voters who would be voting LNP or Palmer this time round.

“But it does show the impact.  There would be people who have turned against the LNP for a variety of reasons, who still don’t want to vote Labor because of the Bligh legacy who are parking their vote with Palmer.” 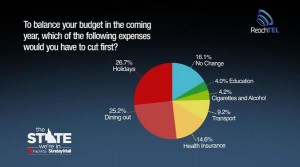 ReachTEL: What are Queenslanders cutting back on to balance their budget?

The wild rivers declarations for the Stewart Basin, Archer and Lockhart systems have been ruled invalid by a Federal court judge in Brisbane this week.

The legislation was introduced in 2005 by the Beattie Government to protect and preserve river systems across the state by restricting development on the surrounding land.

However, action was launched in 2010 by The Cape York Land Council on behalf of the Wik Indigenous people and other traditional owners who claimed Beattie government minister Stephen Robertson did not take into consideration all of the public submissions put before him before making a final decision.

Legal costs were also awarded to the Indigenous communities involved.

The Queensland Government could launch an appeal against the decision but Deputy Premier Jeff Seeney confirmed this week that the government would be repealing all of the wild rivers declarations across the state.

He accused Labor of making a political decision.

“We have always said, for many years, that the wild rivers legislation was about Green preferences,” he said.

He went on to outline the development that was likely to be sought.

“Under the statute regional plan, they certainly identified opportunities for mining, for agriculture and for tourism and they’re the three core industries that … will be enabled by the regulations and processes that we’ve put in place.”

Before coming to power in 2012, Campbell Newman stopped short of stating a LNP Government would repeal the wild rivers act. Instead he opted for a modification in consultation with traditional owners.

Speaking from Cairns in October 2011 he told the media, “We’d create our own wilderness protection legislation, in consultation with traditional owners and other people who live on the Cape and in the channel country.”

“You’re assuming I’m saying we’ll repeal it, we might well change it (the legislation).”

“We will have the protections and we will involve the Aboriginal and Torres Strait islander people in the planning of their country, and also other landowners.”

The relationship between the Newman Government and the Queensland legal fraternity has deepened further into crisis. Just how did the Attorney-General Jarrod Bleijie come to break the confidence and trust of Queensland’s legal community? Our NoFibs report; “The Bleijie Betrayal”.

This week, Premier Campbell Newman wasn’t interested in talking about the appointment of Tim Carmody to Chief Justice or if Attorney-General Jarrod Bleijie had made a blunder in the appointment. He preferred to talk about crime rate statistics which he attributed to Bleijie’s tenure.

He proclaimed some wild numbers, stating that crime had fallen across the state by 15 to 30 per cent.

This raised a few questions in #qldpol, so here the overall crime stats during the Newman Government.
In the first year, the crime rate rose 6pc and was the first rise in Queensland in ten years.
The following year saw a further rise of 2pc.

Most recently, the crime rate fell by 2.8pc.

Overall, this equates to a net rise in crime of 5.2pc under the Newman Government.

With the supermarket war on cheap milk continuing, up to one hundred Queensland dairy farms have now closed. This increases the pressure on the industry to provide enough milk for Queensland’s own needs. The deficit is now at 20 percent, that is, the state must increase importation of milk from southern states or from off shore.

Dairy farmers say without real change and solutions this deficit will rise. Farmers are seeking opportunities for their product in countries such as China where demand is high.

One farmer, Greg Dennis, is milking cows and bottling it using a $200,000 robotic system which he says is justified only if he is getting a fair price at the supermarket shelf.

With no apparent representation from the LNP, perhaps it’s yet another sign that the once mighty National Party of Queensland is long since gone.

Minister for Energy and Water Supply, Mark McArdle wants to introduce smart meters to Queensland. However, he doesn’t want to make them compulsory given the backlash metered out in Victoria.

We’ve heard it all before.

In a recent piece by Ross Gittins entitled, “Why electricity prices continue to shock people”, the real problem exists in the cost of transporting electricity; the cliched “poles and wires”.

Reporting on a recent speech by Professor Ross Garnaut, Gittins explains the “perverse” economic supply and demand force at work. As electricity prices rise, we all strive to use less of it.

However, the catch is, no matter whether it is private or public owned, the “poles and wires” business is a monopoly. (There is no point building a separate network to carry power from the generators to homes. Just imagine a totally separate pole being erected in your street, devoid of the existing network).

Gittins concludes that only direct intervention on this problem by governments will break this “death spiral”.

Do you have what it takes?

In the meantime, advertisements are running to replace the full-time position which was suddenly vacated by Ross Martin. The role draws down a $420,225 salary and a $30,000 car allowance.

Queensland Minister for Police, Fire and Emergency Services Jack Dempsey loves a good “hoon” tweet. He loves the screech of a Twitter burnout as he sends another set of stats down the #qldpol strip.

Did you know under the @LNPQLD‘s anti-hooning legislation 7,700 hoons have been impounded? Means safer streets for Qld families #qldpol