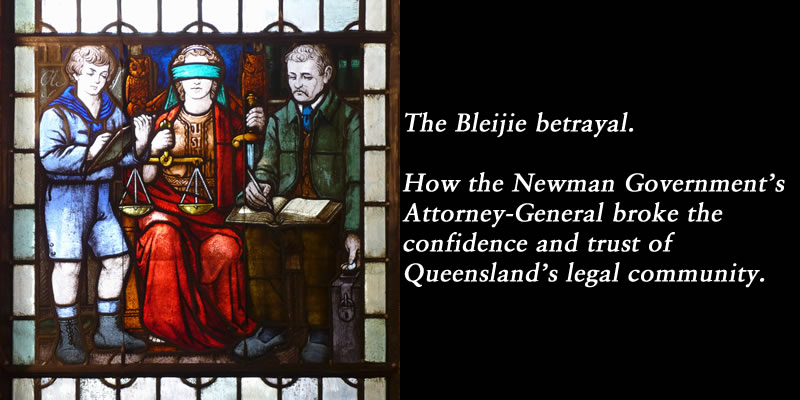 The relationship between the Newman Government and the Queensland legal fraternity has deepened into crisis.

Outgoing Queensland Chief Justice, Paul de Jersey has called for unity amongst the legal fraternity over the appointment of Tim Carmody as his replacement. de Jersey will vacate the position to replace Governor of Queensland, Penelope Wensley.

“The appointment of the next Chief Justice was then made by the Governor-in-Council.

“With that position established, it became incumbent on all of us who are involved in the legal process to support its current expression.

“The stability of the legal system is integral to our democratic system and must be maintained.”

As Madonna King investigated in her column this week, there was no doubt that Carmody had leapfrogged the favourites for the role.

“The point is, if people have a justified perception that he may be biased, that’s just as bad as if he were in fact deeply biased,” he said.

However, a more serious political crisis had been left on the boil. It was the betrayal of confidence by Attorney-General Jarrod Bleijie and his conduct toward President of the Queensland Bar Association, Peter Davis. Davis had quit his position after private conversations with Bleijie over the Carmody appointment had been made public.

Tell them he’s “doing an excellent job making sure we have the best and fairest justice system in the country,” sources told The Courier Mail.

Indeed, striding into the Queensland Executive building for their regular Monday morning cabinet meeting, the ministers followed the script with such variants as; “he has my full confidence”, “he’s doing a great job” and “he’s doing a fantastic job”.

Newman Government Minister for Science, IT, Innovation and the Arts, Ian Walker had gone a step further on Sunday and told lawyers to ‘put a sock in it’.

Premier Campbell Newman explained that he had “the utmost confidence in the attorney-general” and blamed opponents inside the legal fraternity for causing trouble.

“It’s the same old people who want to have a go but there are huge numbers of people in the law who support him and most importantly Queenslanders support him,” he told ABC radio.

Former judge, Jim Thomas and author of “Judicial Ethics in Australia”, also telephoned into the program and described Bleijie as “leaking like a sieve”.

It was left to Tony Morris QC to defend the Newman Government in another radio interview on @612Brisbane.

He described the outcry over Tim Carmody as a case of “sour grapes” within the legal fraternity and praised Bleijie as being a “punctilious” person.

He also argued that all of cabinet would have been made aware of Davis’s comments to Bleijie and thus all of the associated political staff would have known.

“The fact that there has been a leak doesn’t mean it came out of Jarrod Bleijie’s office. In means that someone, somewhere in government can’t keep their mouth shut.”

However, Morris’s case was somewhat eroded later in the week when it was revealed he had previously publicly condemned the Carmody appointment.

Also, in a leaked document to @TenNewsQld, he had secretly congratulated Peter Davis on his “heroic” stance in resigning and commented it was “increasingly difficult to defend the Attorney-General.”

Another senior member of the Queensland judiciary, Court of Appeal Justice John Muir called on Carmody to resign his position during a North Queensland Bar Association speech. Muir, a renowned conservative thinker, surprised many of his fellows.

“I would hope that because of the unfortunate way in which this saga has unfolded, the obvious lack of support for the Chief Magistrate’s elevation to the office of Chief Justice of Queensland,…the Chief Magistrate will see that the only appropriate course is for him to withdraw,” he said.

ABC 7:30: The relationship between the Newman Government and the Qld legal fraternity has descended into crisis.

As the relationship between the Queensland government and the judiciary deepens into crisis, parallels are being drawn between the Newman Government and the Bjelke-Petersen one of the 70s & 80s. In that era, Terry Lewis was vaulted into the position of Queensland police commissioner over the heads of numerous senior police officers. Lewis was later found guilty of corruption as a result of the Fitzgerald Inquiry.

Unlike Lewis, there is no suggestion of corruption surrounding Tim Carmody’s meteoric rise after only nine months as chief magistrate.

Writing for The Guardian, Queensland barrister,  Stephen Keim explained why Tim Carmody’s appointment mattered for democracy in Queensland. He explored the allegation that threats had been made to the Bar Association to revoke its’ power to issue practising certificates.

“To make things worse, Bleijie’s first chief of staff after his appointment as attorney-general, Ryan Haddrick (now a barrister) contacted Mark Plunkett, a member of the committee of the Bar Association. In texts and over the phone he made what some may interpret as threats, including to revoke the power of the Bar Association to issue practising certificates. When these communications were raised with Bleijie’s office, he denied both that Haddrick had the authority to make those statements and the content of the messages and calls.”

Another barrister, Ross Bowler, wrote for NoFibs in which he examined the crisis of confidence that had been created. Bowler sets out how the principles applied to a standard selection criteria were ignored in the Carmody case; “the rule of law”, “the doctrine of precedent” and “the process to appoint the chief justice”.

In quiet contrast to all of these events, Jarrod Bleijie, refusing to front the media, announced via a statement that the position of chief magistrate would go to current deputy chief magistrate Ray Rinaudo and in turn the role of deputy to Leanne O’Shea. The announcements were welcomed by the legal community.

With Her Excellency Governor Penelope Wensley signing off on the Chief Justice appointment of Tim Carmody this week, the umpire’s decision seems final.

Given that Tony Fitzgerald QC described the Newman Government as “megalomaniacs” over the crisis, the political turmoil is set to rage on whilst Bleijie remains in the Attorney-General chair.

Perhaps the final word should go to Brisbane Times columnist, John Birmingham who likened the “Boy Blunder” to a mad mechanic in his piece, “Attorneys General should be seen and not heard“.

Bless you, Jarrod Bleijie. You are the blog that writes itself.