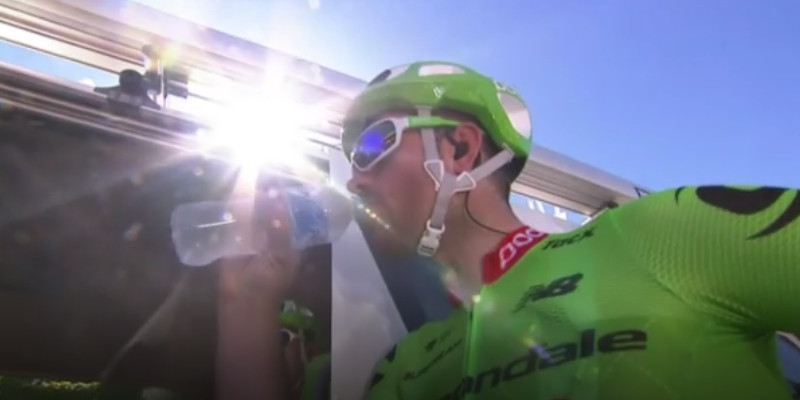 Cyclists in the Santos Tour Down Under UCI Professional cycling race in South Australia today faced the challenge of riding in temperatures over 40 degrees. Local temperatures on the road are likely to be even higher for the cyclists riding on hot road surfaces. Indeed, Jérémy Maison with the FDJ team measured a local temperature of 50C with their Garmin cycling computer, according to a tweet.

The stage was from the Adelaide suburb of Unley, through the Adelaide Hills to Lyndoch, in the Barossa Valley.

The race length was revised down from 145km to 118km, a reduction of 26.5km, with the finishing circuit reduced from two laps to just one, after cyclists in the peloton complained about the searing conditions.

The real irony though, is the fact that the major race sponsor is the South Australian based Gas and fracking company Santos, whose whole business revolves around fossil fuel extraction which causes climate change and more extreme temperatures.

Professional Cyclists Association (CPA) delegate Adam Hansen from the Lotto Soudal proffessional racing team spoke on behalf of the cyclists with UCI officials and race director Mike Turtur while the race was in progress.

“I like the heat so I don’t mind so much but I have to speak for the riders and a lot of riders were complaining that it was too hot,” Adam Hansen said afterwards to Cycling Central. “From the riders’ side, we all wanted it. It wasn’t me going around to all the riders, it was more the riders coming up to me. And it wasn’t just Europeans, it was also quite a few Australians too.”

“I went to the UCI and they were okay with it and then we just needed the okay from Mike Turtur, and he agreed in the end. It was good all three of us could make an agreement together.” said Hansen according to a report on SBS Cycling Central.

Tasmanian Richie Porte from the BMC team also described the hot conditions as very extreme. “I think for me that was the hottest day I’ve had on the bike,” Porte said. “Common sense prevailed there and the stage was cut a little bit short. I know it’s not great for TV, but I think it’s nice for us riders that there is finally a bit of solidarity [on] hot weather rules.”

Race director Michael Turtur, a former professional cyclist himself, highlighted that safety and welfare of riders and spectators is always a primary concern. “We consulted with rider representative Adam Hansen and with our chief commissaire, Alexander Donike, and both agreed it would be sensible to shorten the stage distance.” he said.

The decision to shorten the stage was taken by the race director mid race by cutting out one of the two final race circuits in Lyndoch.

For the riders, shortening the race was a recognition of rider rights and their needs and concerns over heat health safety being listened to. “Once a decision was made and the riders heard it you could see that they really felt it was going the right way. It was like, ‘Wow, we said something and they listened.’

“It’s not like we wanted to cancel the race or anything like that, it was more we said our thoughts and the UCI and race organiser took action for the riders.” Hansen concluded.

The safety of cyclists isn’t always recognised. During the 2015 Tour of Oman the peloton stopped in the shade under a bridge in protest at the searing hot conditions on the penultimate stage.

No doubt the peloton today paced itself for most of the stage taking into account the hot conditions.

“More water, more ice socks down our back, more maintenance of just trying to keep cool and then recover afterwards,” said South Australian cyclist Rohan Dennis from the BMC Racing team to the ABC.

Spectators were also warned to take extra care stubbing out all cigarettes with the high fire danger. South Australian Health’s acting chief public health officer, Dr Ken Buckett, also warned members of the public to stay hydrated, use the shade that was available and take it easy in the hot conditions.

“The athletes are in for a bit of a rough time today, I think, but they are athletes.” said Buckett. “They do know about this sort of risk, they live with it and they will make sure that they are properly hydrated and they are properly supported with support vehicles and so on. But the general punter who is out on their bike now really should take extra special care, keep sunscreen on, keep well hydrated and just don’t over exert in the heat.” he warned, in a report on the ABC.

Despite the decrease in length, the final kilometers were still brutal, explained one of the riders – Edward Theuns, a Belgian racing cyclist riding for the Trek–Segafredo team.

“It was so hot! We tried to keep cool all day and managed pretty well, but when you come into the final 20kms, and the tempo goes up you just overheat so fast. You can’t cool yourself because you can’t go to the car anymore to pick up fresh drinks, so the last kilometers were brutal.”

The race was determined by a sprint with Australian sprinter Caleb Ewan, a member of the Australian Orica-Scott team, winning the race in a tight finish.

In cycling, staying hydrated is vital, and especially on the searing hot days such as today’s stage event. Matt White, Orica-Scott team director, emphasised the importance of hydration not only for this stage, but that poor hydration in a stage can have long lasting impacts on performance on subsequent stages.

“We’ve stressed with our guys that if you make a mistake with hydration and you cook yourself today, you’ll be paying for it for days – and tomorrow is a crucial day.” Matt White said.

On the second day of the Australian Tennis Open in Melbourne, players got to feel the 37 degree Celsius heat.

Initially with a 38 degree day forecast, this forecast was then reduced to 35C. But the Australian Bureau of Meteorology measured today’s maximum temperature at Olympic Park of 37.4C at 5.00pm.

Play went on with the wet-bulb globe temperature (WBGT) (a combination of ambient temperature and humidity levels) threshold of 32.5C not being reached. This threshold is part of the Australian Open Extreme Heat Policy which has provoked some controversy in past years (Wikipedia). Players today were forced to sweat it out on court, while spectators had to endure in the stands or find the nearest mist sprayer to cool off.

The remainder of the week looks to be much milder temperatures for the tennis open.

Heat stress is a well documented risk for top athlete cyclists, with a substantial amount of scientific research.

But the risks are very much different for most of the population that don’t have the same training or fitness as professional cyclists, or undergo the same acclimatization regimes.

Liz Hanna and Peter Tait’s 2015 study – Limitations to Thermoregulation and Acclimatization Challenge Human Adaptation to Global Warming – run through the human limitations of our thermo-regulatory system and assesses the health risks and possibilities for climate adaptation on a population level. The paper goes into detail about the thermoregulation model for the human body, and on limits to physiological acclimatization to extreme heat events.

“The capacity to significantly upscale acclimatization diminishes among those in hot regions, where acclimatization is already approaching thermal maxima for human tolerance. Survival will require capacity to lessen extreme heat exposures through expansion of existing technical and behavioral adaptations, where possible. These hot nations are at extreme heat risk. That many megacities are situated in hot regions means that billions of people currently have restricted capacity to substantially boost their acclimatization capacity sufficiently to ensure their future health and well-being in a hotter climate. The high humidity endured by many of these megacities will further escalate the risk.” Hanna and Tait argue.

The authors found a lack of population health studies focusing on ambient temperature. “We found no population level studies on human tolerance of ambient temperatures. However there is a growing literature highlighting reduced worker performance in the heat. To date, our understanding of human heat generation and thermal tolerances is primarily derived from studies measuring the responses of athletes, university students, and military personnel, who are relatively fit and young. Hence caution must be applied when translating findings to the general population…”

It is clear that no matter whether we can limit global average temperatures to well below 2 degrees C as the Paris Agreement states, we will need to acclimatize and adapt to much higher temperatures and extreme heat events such as we saw today on the Tour Down Under. Hanna and Tait make this abundantly clear as part of their study conclusion, which states in part:

“Acclimatization to a hotter world is a necessity for survival. However there are limitations. Adaptation to this new world can only partly be achieved through physiological responses. The remainder must derive from orchestrated strategies to reduce exposures via alterations to social, cultural technological and behavioral patterns. Shifts in housing and urban design, clothing, socially accepted behaviors and working hours will be required, as well as reorientations in industry, infrastructure and transport. Such major transformational changes will require decades to achieve, especially in the realm of infrastructure, housing and urban design. The complexity and embedded character of existing systems throughout the socio-political and economic fabric of society, coupled with propensity for inaction suggest that a coordinated multi-frontal approach is essential. This is necessary for human survival and sustained societal functioning in an increasingly hot climate.”

Health professionals have been arguing that Australia needs a national climate health policy, which would include policies on heat health. Health experts even gathered for a climate health strategy policy discussion in Canberra in October 2016. But so far, there has been no action by the Health Minister Sussan Ley (now the former minister) or by the Turnbull government in this area.

Why do they plan sports events in this oppressive heat every year? It must be dangerous #ausopen #tdu #tourdownunder #ridiculous #heatwave

Hugs to @tourdownunder for deleting one finish circuit due to extreme heat. Progressive organization is why we love starting the season here