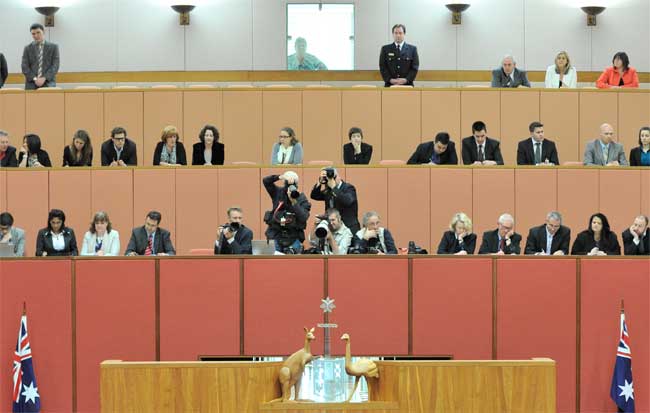 The press gallery in the Senate chamber.
Auspic

MARGO: Everyone know journos can’t keep a secret, but they’ve somehow managed to keep the list of Federal Press Gallery members secret from the general public. Until now.

We’ve published two pieces on the PG triggered by its refusal to allow @callumdav to join as a reporter for @independentaus; Your guide to the Press Gallery and its gatekeeper and The Press Gallery contemplates reform: Join the conversation

As regular @NoFibs readers know, I FOI’d the list of Press Gallery members when I realised, much to my surprise, that it was secret.

Hi @margokingston1 still consulting with Gallery members on this. Plan is to have a Gallery website created with list of members in July

@David_Speers, any developments on membership criteria?

@margokingston1 still working on that too. Plan to include criteria on the new website.

David’s consultations have alerted some members to its secrecy, and, lucky for us, one of them thinks the secrecy so silly I’ve had a leak. So here is the 2012 list with contact details of non-office bearers deleted.

The public will get the latest list online either via FOI or the new PG website, whichever comes first.