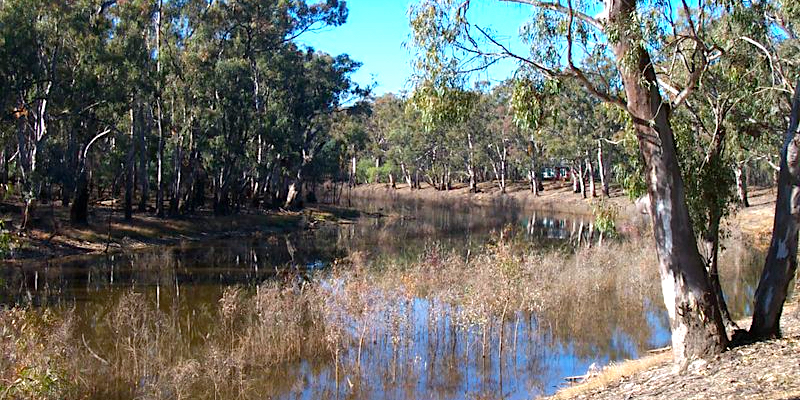 The river is our memory, we walk along it and remember our history and our ancestors by looking at the marks and places.

If you only watch the mass media you could still miss some big stories about the Murray-Darling Basin. Important rivers in the system have been poisonous for years. As a European poet remarked:-

It is a long while since our river systems gave up ‘billyfuls of rainwater wine’.

The rivers in this massive system have periodically run dry, and their condition (or lack of it) has been protested by Aboriginal people. That’s not new.

Lack of water for agriculture and mass fish kills have finally forced parliament to commission science on river health and climate. Scientists and Aboriginal people have, as a result, put climate change and Indigenous water rights at the forefront of considerations.

Scrutiny started with criticisms of the Murray-Darling Basin Authority (MDBA), not with climate or Indigenous concerns.

The Productivity Commission (2018) and the South Australian Royal Commission into the management of the Basin (2018) responded to agricultural and state’s rights complaints.

In early 2019 the ‘Vertessy Report’ (commissioned by Minister for Agriculture and Water Resources David Littleproud), and an AAS (Australian Academy of Science) report (commissioned by Bill Shorten) were commissioned to address the massive fish kills in the lower Darling at the Menindee Lakes. Both of these reports focus on climate change and Indigenous water interests.

Vertessy’s panel talks about water management, low flows, poor water quality, sudden climate change, and climatic conditions. As a result, Mr Littleproud now wants to spend $20 million on research, video cameras, unspecified ‘gaps’, and better monitoring. His notable failure to talk about climate change is belied by the contents of the Vertessy and the AAS reports.

Both reports provide commentary on weather patterns and climate science that are deeply alarming.

In January 2019, Bourke suffered 21 consecutive days of 40 degrees or above, beating the previous record of 17 days in 1939. Menindee’s highest temperature was 48.8 degrees. The spatial extent of these record-breaking temperatures exceeded 1939 records.

A 1.5-degree rise in the overall annual mean temperature across the Basin since 1910 was reported.

Long-term changes were also found in rainfall and inflows. Across southeast Australia an 11 per cent decrease in April-October rainfall across 1999-2018 has been observed. NSW river inflow was at “less than one per cent” of the annual expectation (that is: 30GL cf 4000GL).

2018 was the eighth-driest and the hottest year on record in the Basin. Winter and spring evaporation set another record.

Future climate projections, reported by Vertessy and the AAS, are even more alarming.

Two Basin regions are expected to see their annual mean temperatures increase by 2.7-4.5 degrees (Murray Basin cluster) and 3.0-5.4 degrees (Central Slopes cluster) by 2090 on high emissions scenarios. Rainfall will vary by as much as -38pc-+4pc and -39pc-+15pc, making it virtually impossible to plan.

We can expect insurance companies to bail out on insulating those who suffer these conditions. Government would do well to consider its position as the ‘insurer of last resort’.

A ministerial media release which fails to mention the climate change science reported is irresponsible.

If returned to office in May, the Mr Littleproud has said he will “work with NSW” to have water savings allocated to Aboriginal people. This is not encouraging.

A national water policy is already supposed to support the delivery of water entitlements to native title holders. State governments (like NSW) are responsible.

Presently, native title determinations are not reflected in water plans or in water management.

Even though the Barkandji were granted water rights along 400 kilometres of the Darling River in 2015, there are no NSW Water Sharing Plans.

An old living culture in the driest inhabited continent on Earth doesn’t have a say in water management.

This has to change. Climate change is going to reduce whatever water is available. Aboriginal entitlements must be included in the (very Western) calculations.

Water is central to the Barkandji’s story of country. Unlike our government, Elder Uncle Badger Bates sees the bigger picture:-

The Barka [Darling River] was created when Kuluwarra (ancestor from the dreaming) let the Ngatji (Rainbow Serpent) out of his waterbag near Bourke, and the Ngatji lives in it still… the Ngatji looks after us and we have to look after it, it is our traditional job to look after the Ngatji and the river and the other waters of the Barka and its floodplains.

Equally clearsighted, Patricia Doyle of the Menindee Local Aboriginal Land Council had this to say:-

Aboriginal and other Basin communities are already feeling the impact of climate change. #ClimateAction is urgent.