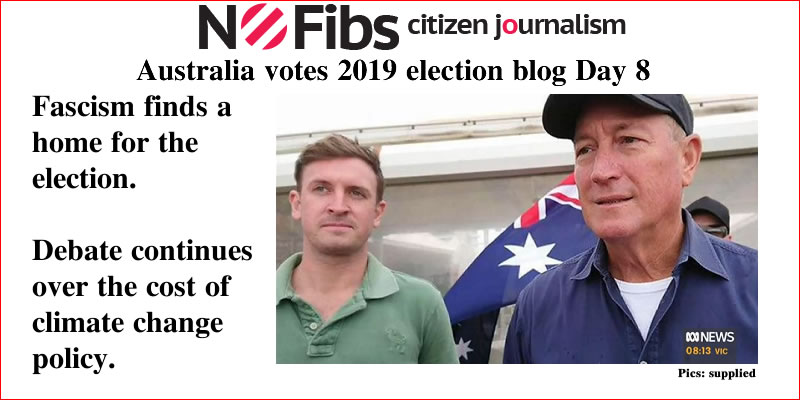 Fascism finds a home for the election

Zali Steggall spoke to Margo Kingston the day after the sexualised attack on her by Advance Australia. Zali Steggall takes on Tony.

Journalist Jonathan Lea is not happy with Bill Shorten over the opposition leader’s answers on Labor’s climate change costings. For the third day in a row, he pressed Mr Shorten.

“In the paper today, thee MacGibbon report estimates that it will cost business $25 billion by 2030 to buy the foreign carbon credits can you say how much money you believe Australian businesses will have to pay to buy these carbon credits over the next decade? Is the $25 billion figure accurate is it more, is it less?” he asked.

Mr Shorten said he did not accept the $25 billion carbon credit figure from the MacGibbon report.

After the interview, Mr Lea launched two tweets about Mr Shorten, one involving a crocodile and another questioning if Mr Shorten would ever return to Darwin.

Challenged to release a figure for the cost of the Coalitions’s direct action climate change policy, Prime Minister Scott Morrison responded with a $3.5 billion figure.

However, as Peter Hannam explained in February, the government is using Kyoto targets as its base whereas the rest of the world has moved on.

“For one thing, the Paris accord was meant to be a reset for all nations, in order to more aggressively reduce the greenhouse gas emissions than under Kyoto. Whatever surplus credits nations had built up were not intended to count. That’s why Germany, the UK and Sweden were among nations to cancel surplus credits they built up during the Kyoto period.” Scott Morrison’s pea-and-thimble trick.

Fascism finds a home for the election

ABC’s Alex Mann and Benjamin Sveen have reported on the entrance of fascism into the election campaign. Longtime extremist Andrew Wilson has boasted of recruiting and producing content for Queensland Senator Fraser Anning’s Conservative National Party. “Leaked messages have revealed the Australian alt-right’s secret plan to use Queensland senator Fraser Anning to expand its extreme agenda in the Australian Parliament and beyond.” Alt-right to release ‘avalanche’ of election campaign propaganda to help Fraser Anning.

In March, Jason Wilson wrote about the St Kilda rally which Senator Anning attended and explored the stages of fascism. Quoting Robert O. Paxton from The Anatomy of Fascism, he wrote, “The second stage, in which fascists become players on a national stage in electoral or pressure group politics, may not have arrived in Australia, but the presence of Fraser Anning shows that fascists are making connections at the heart of representative democracy.” St Kilda rally: A fascist movement can only be kept small if we call it by its name.

Andrew Wilson had also boasted of subverting the Facebook page of Clive Palmer with racist memes.

Researcher Andy Fleming commented for the ABC article, “If I were Andrew Wilson or one of his comrades, I’d be delighted. Those who are members of this movement look to Anning and they know he is their guy.”
Alt-right to release ‘avalanche’ of election campaign propaganda to help Fraser Anning.

Conservative National Party was scheduled to unveil their candidates today.