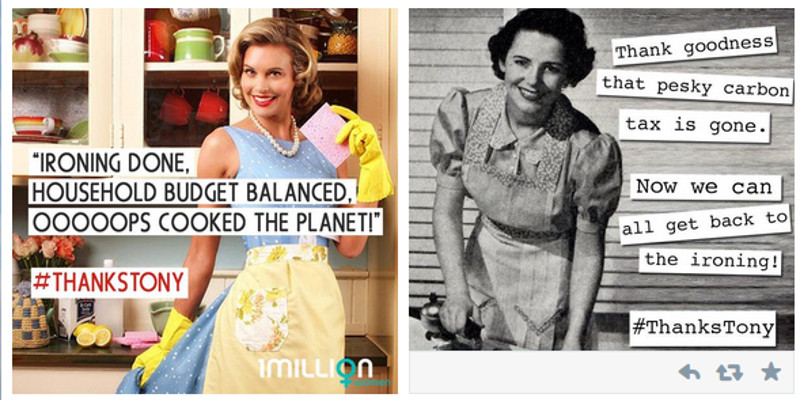 Prime Minister Tony Abbott has labeled the Carbon Tax abolition as his greatest achievement as Minister for Women in 2014.

What a world we live in where we face major impacts on human civilisation from climate change and environmental degradation and Australia’s Prime Minister and self appointed Minister for Women Tony Abbott identifies the abolition of the carbon tax as his greatest achievement in 2014 for women in Australia.

Host of the program Lisa Wilkinson asked Tony Abbott to nominate his top achievement in his capacity as Minister for Women. To which Prime Minister Abbott replied:

“Well, you know, it is very important to do the right thing by families and households. As many of us know, women are particularly focused on the household budget and the repeal of the carbon tax means a $550 a year benefit for the average family.”

Abbott also promised his paid parental leave scheme would also be introduced to parliament in 2015, although it has it’s detractors in the Liberal Party Room and is heavily criticised by Labor, the Greens and crossbench senators and unlikely to pass.

Abbott’s comments brought swift reaction in responses on social media with the hashtags of #thankstony and #burntheironing, and #PutYourIronOut being popular.

Tony Abbott declared his biggest achievement as Minister for Women was the the repeal of the climate tax. #thankstony pic.twitter.com/gm5Yg8LyZJ

Thnx Tone, with the savings from the abolishment of the carbon tax I have been able to afford much more ironing starch #ladybudget #auspol

For possibly saving, maybe, but not likely, $550 on power bills….but only if your power bills are an astounding $11,000 a year #ThanksTony

Amy Stockwell, in an opinion article on Mammamia, said “It’s time for the Minister For Women to resign.” and listing a myriad of critical issues for women that are not being adequately addressed by this government.

Here is how the UK Independent reported the story. Here is how Ari Phillips wrote up the story in the US for Climate Progress website.

Women in Cabinet doubled to 2 of 19

In the ministerial reshuffle Sussan Ley has been elevated to Cabinet and been named as Health Minister and Minister for Sport. This still makes Australia a lower representation for women in executive Government than Afghanistan and Iraq.

This bit of musical satire by @vanbadham, @maevegobash & Claire outlined a few of the issues one would think to be more important than abolition of the carbon tax, including to list a few: disproportional representation among the poor due to cuts to benefits, cuts to education, the gender pay gap, poor ministerial representation, high rates of domestic violence. #burntheironing

Just to take you back two years to 2012 and Prime Minister Julia Gillard’s misogyny speech on Tony Abbott. Well, Tony Abbott has continued denigrating the women of Australia.

Of course women are also dependent on social services through Family allowances and benefits and Abbott has moved Scott Morrison to Minister for Social Services. In Immigration Morrison presided over a cruel and inhumane policy of offshore detention of asylum seekers and refugees.

A decision announced on Monday, under the previous Minister Kevin Andrews, resulted in Social Services scrapping funding for homeless and housing groups on December 21. What a wonderful Christmas present this must be for these programs to hear.

Morrison’s appointment to Social Services does not portend well for the socially disadvantaged dependent on benefits and social security if his role as Immigration Minister is anything to go by. Refugee advocate and barristerr Julian Burnside outlines Morrison’s calculated cruelty which he leaves as his legacy in Immigration

Also in the cabinet reshuffle Science has made a return, at least in name, to the ministry with Industry Minister Ian McFarlane assuming the title of Minister for Industry and Science.

In an interview on the global town hall site Baldwin gave his considered opinion which is decidedly favouring climate denial than acknowledging the scientific facts:

“On climate change, I am neither a sceptic nor a denier. I have read widely and talked to scientists, but I am not a scientist. Maybe climate change is cyclic? I do not know, because there are too many subjective opinions in this argument, each proffering a different expert perspective.

In August it was revealed in ICAC proceedings that Baldwin strongly urged the NSW Coalition Government in 2011 to support Nathan Tinkler’s Buildev coal loader project.

Counsel assisting the ICAC Geoffrey Watson described Mr Baldwin as “really spruiking the case” and “in effect [giving] Buildev a right to review the terms of his letter”, according to a report in the Newcastle Herald.

Baldwin has a history of climate denial as clearly ennunciated in a speech in China in 2010 at the APEC SME summit, and in parliament, all clearly outlined in this report by Giles Parkinson at Renew Economy: Tony Abbott appoints climate skeptic to “help” on environment.

Meet the new Asst Min for the Environment http://t.co/ZsSuOeyohR and http://t.co/uF27BwYIU1

Neither will Foreign Minister Julie Bishop be allowed to get carried away and commit more than a semblance of Australia’s fair share to the UN climate negotiations as climate sceptic and Trade Minister Andrew Robb was appointed early in December to assist her with climate negotiations and has already announced to Australian business leaders Australia may not sign on to a new global climate deal.