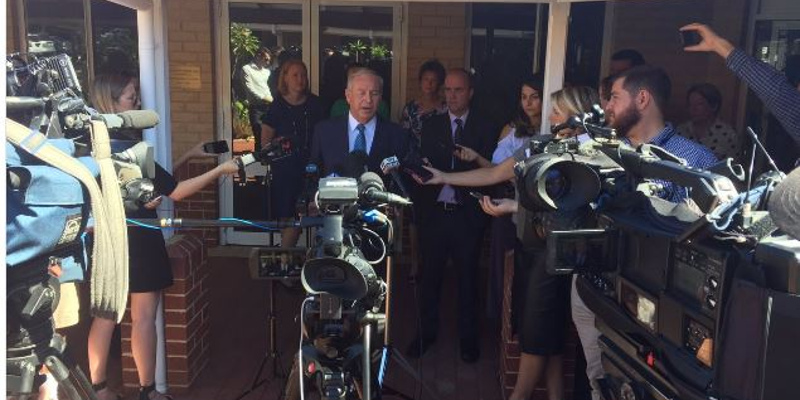 Colin Barnett says there is no such thing as clean coal. Photo: Tom Rabe/twitter

Fracking is in it’s relative infancy in Western Australia, but is at the stage where it could be substantially expanded to encompass the Kimberley, the grain belt and south-west.

Author Tim Winton has made an impassioned plea in the lead up to the Western Australian state election due to be held on 11 March, on the Frack Free Future website

“The WA Government has granted gas fracking exploration leases over some of our most productive farmland, our most precious groundwater aquifers, and our favorite holiday areas – including the South West, the Kimberley, and Ningaloo.

“Fracking is a risky industry with a terrible reputation globally. It’s like a cancer on the landscape, destroying families and gutting communities.

“If ordinary citizens don’t take action now, the Kimberley could be industrialised, and the State’s precious drinking water could be compromised by thousands of gas wells.

“This is our chance to defend our State and the futures of those who come after.” he said in a statement.

Frack Free Future have produced a Fracking scorecard for the major parties at the election.

“Fracking has been shown to be responsible for serious health, water and environmental issues overseas and in the east, and with the industry poised for a massive expansion in WA is vital people know where the parties stand on this issue” said Frack Free Future coordinator Jules Kirby.

The scorecard Rates the parties on a school grade system.

The Liberals were awarded a ‘complete fail’ F grade for their gung-ho support for the fracking industry.

The Greens came out with an A+ on account of their call for an immediate statewide ban, the granting of veto rights for communities to block fracking companies coming onto their land, and their commitment to a 100 per cent Renewable Energy Target which would kill demand for more gas anyway.

The WA Labor was graded as ‘more work to do’ B. This was due to a potentially strong moratorium (temporary ban) position weakened but with hints that the process could lack rigour, and a failure to support veto rights for communities.

One Nation and The Nationals scored ‘B’ and ‘C’ respectively.

“There is huge variation in where the parties stand on protecting WA from this dangerous and accident-prone industry, but there is also variation in how individual candidates within parties stand.” said Jules Kirby.

The Conservation Council of Western Australia argue that environmental issues might cost Liberal Premier Barnett the election. While WA is commonly seen as a resources state, environmental issues do bubble up from time to time. Fracking is one of those issues that might not necessarily appear on pollsters radar.

“Farmers across WA are concerned about gas fracking because of its impact on their farming business and the health of their families, and because they have no rights to prevent fracking on their land. Mothers are concerned about the impact of fracking on drinking water resources, its contribution to climate change, or the toxic emissions that poison communities surrounding gasfields. People across the State are astonished that a government would issue gas fracking exploration leases over their homes and communities with no consultation and very little regulation. None of these concerns fit into an abstract notion of ‘the environment’ as it appears on a pollsters list, but they will be important considerations for many at the ballot box.” says the CCWA.

THE VINES has declared itself Gasfield Free with 98.8% opting to protect land, water & health from unconventional gasfields#Wapol pic.twitter.com/S1RAbKS4P8

WA Labor to place moratorium on fracking across WA with inquiry but no committed to a time or veto rights #WApol https://t.co/fO3pz1xyLo

One of the issues in this election is that Barnett has announced the sale of 51 per cent of Western Power, which would be followed by further sell downs. In essence, privatisation of Western Australia’s electricity distribution network.

There has been a lot of criticism of privatisation of government assets, particularly utilities. Voters are not happy with the privatisation process which continues the neoliberal doctrine that the government should get out of all services, no matter how important they may be considered by society. Academic John Quiggin has even strongly argued at The Conversation The case for renationalising Australia’s electricity grid.

Meanwhile Colin Barnett at a Press Conference on March 7 said there was no such thing as clean coal, which puts him at odds with Prime Minister Malcolm Turnbull and Energy Minister Josh Frydenberg. He is of course correct in this, but what he wants to do is for Western Australia to capitalise on the states wealth ofnatural gas, and even uranium, to produce lower emissions power.

“I mean, all this stuff about clean coal, no such thing as clean coal,” Mr Barnett said. “Natural gas is clean, produces less than half of the emissions of a coal power station so it’s a good technology to use.” reported the West Australian. Maybe Josh Frydenberg and Malcolm Turnbull need to have a sit down discussion with Colin Barnett to clarify why clean coal is an oxymoron.

But Barnett is wrong on gas as well. While it is lower in emissions than coal (by about 50 per cent) it still locks in fossil fuel infrastructure assets. We need to transition our electricity generation to zero emissions by 2035 to stay on target for the Paris Agreement’s 2C degree target. And we should be aiming for well below this. Building new gas plants locks in infrastructure that may have to be closed early. Stranded Asset.

Barnett made no mention of also making use of the excellent solar insolation resource the state possesses for solar farms and even solar thermal plus storage. There was no mention of the abundant wave energy already being harnessed off Fremantle using Carnegie Wave Energy CETO 6 technology. If Labor wins office, Carnegie may get to build up to 100MW wave farm in Albany, according to RenewEconomy.

Polling points to change of Government

Internal polling for the Liberal Party leaked to WAToday evidently shows the government of Premier Colin Barnett facing a two-party preferred position of 43-57, with Labor favoured. Other polls also show Labor leading in the two party preferred vote, although not by quite as much as the leaked internal poll.

The interesting thing here in these polls is not that they point to a likely Labor victory, but the level of support for One Nation standing at a similar range as The Greens. While the Greens vote has stabilised at about 9 per cent, the support for One Nation is likely to be a much more volatile protest vote against the major parties. If the One Nation vote follows the polls, it is likely One Nation and the Greens might together hold the balance of power in the states upper house.

The Western Australian Liberal Party sealed a deal with Pauline Hanson to preference One Nation above their National Party Coalition partners in the Upper House in country regions. It is thought that this is adding to the backlash against the Liberal Party, and perhaps also affecting more recent polling of levels of support to One Nation.

Given the time difference, it will be an especially late night for all of us Eastern states commentators watching the vote count on Saturday night.

Vote wisely Western Australia voters and use your preferences to the full.