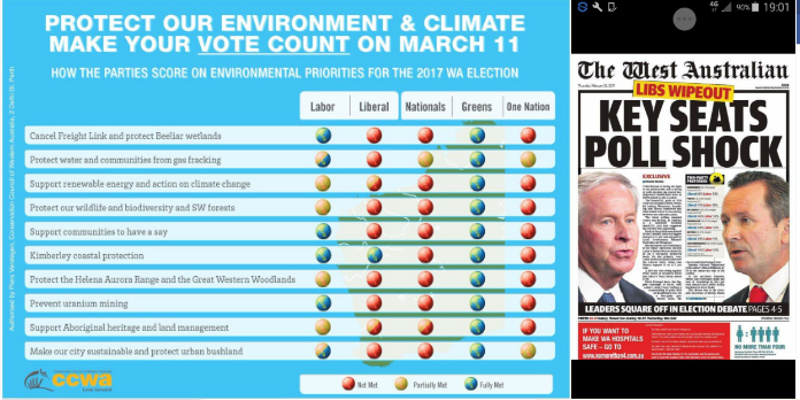 Western Australian voters go to the polls this Saturday on March 11. There is the smell of change in the air, and in the polls.

Liberal Party Premier Colin Barnett has had two terms in government since 2008 and is seeking a third term. Even so, the Labor Opposition lead by Mark McGowan needs a statewide swing of about 10 per cent to form government. The polling indicates that such a swing is in the air.

The ABC election analyst Antony Green has an excellent blog on Vote Formality Rules in Western Australia. He also gives a Summary of Candidates and Parties Contesting the 2017 WA Election. Green also highlights continuing malapportionment of votes in the Legislative Council with voters in the Mining and Pastoral Region having votes that carry six times the weight of voters in Perth, while voters in the Agricultural Region have four times the power of voters in Perth. The ABC has full coverage at it’s WA Election 2017 website.

The preference whisperer Glen Druery is reported to be active advising micro parties how to cross preference for the chance of one of them (in each region) being elected to the WA Legislative Council. Could we see the anti-science policies of the anti-flouride party (Fluoride Free WA) win a seat? Could it be any worse than the anti-science global climate conspiracy theories (see this 2013 Pauline Hanson article) of One Nation?

The Western Australian mining boom is well passed it’s peak with most of the big energy projects now in production and export phase, and the consequent down turn in mining construction jobs. Much of the mining royalties will dribble in to the state’s revenue coffers in decades to come, but state expenditure on supporting mining development has left a $33 billion budget deficit.

Indeed, it seems very generous tax concessions will minimise any returns to the Commonwealth from the huge Western Australian offshore gas infrastructure investments from Gorgon, Wheatstone and Pluto projects for decades, if at all, according to a recent report in the Sydney Morning Herald: Turnbull government called on to explain where Australia’s offshore gas wealth is going. By 2021 when Australia is likely to surpass Qatar as the largest natural gas exporter, Australia is estimated to receive just $800 million in royalties and taxes while Qatar’s government will receive $26.6 billion in royalties for a similar quantity of gas exported.

In the middle of this election is the rise in polling numbers for Pauline Hanson’s One Nation. There was a preference deal, the ABC reported, which the WA Liberal Party did with One Nation in an attempt to shore up preference votes in what looks like a tight election at best for them. And signs both Liberal and One Nation voters are disgruntled with this deal.

But Pauline Hanson’s January promise of supporting a greater share of GST revenue from Queensland to Western Australia made on radio, and her more recent categorical statement “that at no point have I ever said strip GST money out of Queensland or any state specifically” seems to highlight she is playing both Queensland and WA voters.

After vociferous public reaction to Hanson’s anti-vaccination answers on ABC Insiders Program on 5th March, she has now backtracked and partially apologised reports SBS, but on climate change she is still in denial of the science.

Strange that Hanson backed down on vaccine denial but still fosters climate denial. Both have huge impact on health, just on diff timescale.

But the Liberal-One Nation preference story gets even stranger, with a sitting WA Liberal MP Dr Graham Jacobs spotted ‘handing out’ One Nation election material at pre-poll in Esperance in his seat of Eyre, according to a Sydney Morning Herald report.

Even faced with these climate impacts, the Barnett government is pushing ahead with the Roe 8 freight-link development. This demonstrates it’s lack of awareness on environmental fragmentation of important wetlands and the threat to Western Australia’s fragile biodiversity and unique ecosystems. See the report in The Conversation on Roe 8: Perth’s environmental flashpoint in the WA election. Perth’s urban development is generally impacting on the threatened Banksia woodlands.

Fracking for unconventional gas and privatisation of Western Power are other related social and environmental and concerns this election. See my article Fracking, Western Power privatisation issues as Western Australia goes to the polls. Labor Opposition Leader Mark McGowan claimed on ABC radio AM Program that with privatised utilities, prices will go up. WAtoday have built upon my story on author Tim Winton speaking out on fracking as an election issue with a comprehensive and detailed article: Tim Winton speaks on gas fracking, WA’s ‘digging and dealing’ economy. Fracking is definitely on the nose out there in the community.

In terms of elections I have always been driven more by policy than personality. Good policy should drive the voting process. More often than not policy resides in the background and the personalities of candidates, and particularly party leaders, becomes the prominent influence.

Independent non-government organisations can and do help address this focus problem. These organisations have expertise in policy areas and their rating and comparing of party policies is a useful policy driven barometer for casting your vote.

So, here are the election scorecards I have come across for the 2017 Western Australian state election

I saved the best to last. The Rottnest Wind Turbine (@rottoturbine) has done the hard work comparing the climate and energy policies of the major parties in Western Australia, although I updated the information on One Nation in this policy area. Sorry, you need to click through for the final scores on this one: