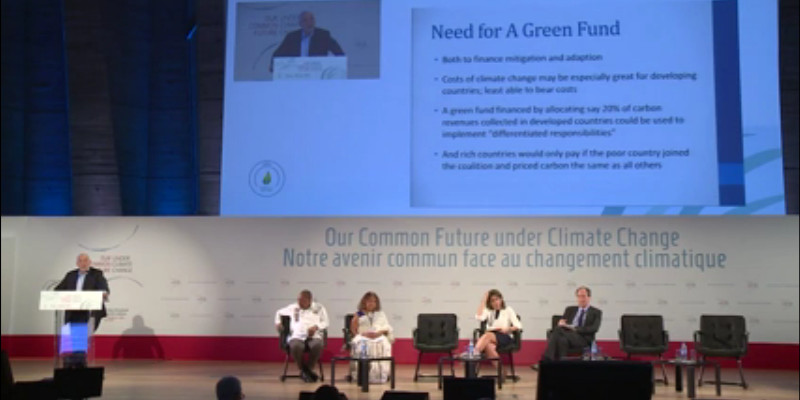 Nobel award winning economist Joseph Stiglitz has raised the prospect of a global carbon tax lead by a ‘coalition of the willing’, with cross border taxes on goods from non-participating countries, as one strong measure to transition the planet to low emissions and fight climate change.

Speaking at the plenary of the Our Common Future Conference on climate science in Paris on Friday he outlined that carbon trading and the national voluntary target approach through the UNFCCC process, like we are seeing in current COP21 negotiations, have essentially failed. According to projections by Climate Action Tracker, we are still on track for 3 to 4 degrees Celsius of warming this century, overshooting the 2 degree level that was decided upon at Cancun in 2010.

Instead he argues for a global carbon price with the facility to tax or place tariffs on carbon intensive production or products at national borders as essential to discourage countries that do not have national carbon taxes or capped carbon trading or emissions reduction schemes. He thinks that such tariffs would not breach current World Trade Organisation rules on restriction of trade.

“In fact it changes the incentives, because it provides [countries] incentives to join the agreement. If they don’t, effectively carbon taxes are being collected by trading partners. Their trading partners get to collect the revenue from the carbon tax and that provides them with an incentive to go on. I actually think that stronger measures should be undertaken, but this is something that can be done within the current framework.” he said.

He also advocates a portion, perhaps 20 percent of carbon pricing funds raised by industrial countries, should be allocated to a global Green Climate fund to aid some of the poorest developing countries in recognition of historical carbon pollution by western countries and differentiated responsibilities. He has identified that the Green Climate Fund articulated at Copenhagen in 2009 with a promise to raise $100 billion a year by 2020 to aid developing countries is severely struggling to raise the promised funds. Such funds are now being promised as a mix of government and private funding. 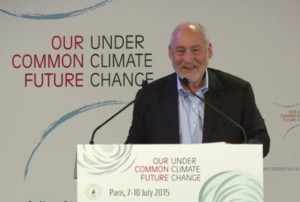 Stiglitz argues that global carbon pricing lead by a coalition could provide a mechanism for funding a climate Green Fund. Funding developing countries should only take place if those countries also participated in the agreement on carbon pricing.

“The rich countries would only pay if the poor countries joined the coalition and priced carbon the same as all the others. So this would be a framework for providing a strong incentives for the developing and emerging markets to join this coalition committed to addressing the problem of climate change.” he said.

“Creating a green economy is not only consistent with economic growth, but it can actually promote economic growth. Especially when there is a lack of aggregate demand as in the aftermath of the financial crisis, a situation that continues today. Even more so if we measure growth correctly as suggested by the Commission on Measurement of Economic Performance and Social Progress which I chaired.” he told the gathered scientists and academics.

“An agreement about an enforceable carbon price amoung a coalition of the willing, enforced through cross-border carbon taxes, I believe holds out the best promise for a way forward.”

“It is going to be important going forward that we create a recognition of the expectation that the international community is going to be addressing the problem of climate change. There will be a carbon price and it will be incentives for all of us, all firms, all countries to go along with this increasing momentum, recognition of a problem, the most serious problem, that our planet is facing.” Stiglitz said in concluding his speech.

Stiglitz did a telephone interview with Bloomberg where he outlined his arguments against voluntary targets and carbon trading and advocated a single, global price for carbon dioxide, with cross-border taxes to penalise those countries that sought to continue high levels of carbon intensity. He called the current United Nations climate negotiations, which involves nations submitting their voluntary national targets or Intended Nationally Determined Contribution (INDC), as a charade.

Global carbon pricing would add substantially to business investment stability. It is noteable that six major oil companies – BG Group, BP, Eni, Royal Dutch Shell, Statoil, and Total — came out in favor of a global carbon price in an open letter addressed to the United Nations and Governments on June 1.

“For us to do more, we need governments across the world to provide us with clear, stable, long-term, ambitious policy frameworks. This would reduce uncertainty and help stimulate investments in the right low carbon technologies and the right resources at the right pace.”

“We believe that a price on carbon should be a key element of these frameworks. If governments act to price carbon, this discourages high carbon options and encourages the most efficient ways of reducing emissions widely, including reduced demand for the most carbon intensive fossil fuels, greater energy efficiency, the use of natural gas in place of coal, increased investment in carbon capture and storage, renewable energy, smart buildings and grids, off-grid access to energy, cleaner cars and new mobility business models and behaviors.” the statement says.

If a ‘Coalition of the willing’ such as China, Europe and the USA, plus perhaps several other smaller nations, implement linked national or even regional carbon taxes or capped emissions trading and impose tariffs on imported Australian goods, it will be Australian export producers that will suffer because we did not continue or implement a framework to drive low carbon transition in our economy. Our coal will be taxed, but also our agricultural and manufactured goods will also be subject to such border tariffs.

The world is moving quickly with many countries, and some regions adopting carbon pricing, with those schemes steadily linking up.

Australia is the only country to go into reverse and abolish a national carbon pricing scheme. This may prove to be very foolish come back and impact the Australian economy. Already Australia’s low ambition climate targets came under fire at the Bonn multilateral assessment in June 2015.

Instead we see our Federal Government support for new coal mines, such as Adani’s proposed Carmichael coal mine in the Galilee basin already noted as a carbon bomb, or the recent approval of the 35 square kilometre Shenhua mine on the fertile region of the Liverpool plains of central New South Wales. This is happening when the global coal markets are in structural decline, according to the Institute for Energy Economics and Financial Analysis.

You can watch Joseph Stiglitz full speech at the 4th morning Plenary at the conference in Paris. The plenary youtube video is 2 hours in length, but Stiglitz speech is the first up, starting about 2 minutes in and goes for just under 20 minutes.