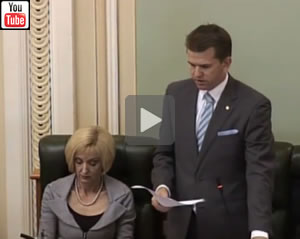 At an administrative level, the Crime and Misconduct and Other Legislation Amendment Bill (2014) removes the need for bipartisanship approval between the government and the Parliamentary Crime and Misconduct Committee (PCMC) to appoint a CMC chairperson. The bill would also create a new position of chief executive officer (CEO). While all commissioners are required to be an experienced professional from the legal fraternity, the CEO could be filled by a bureaucrat and would report to the government.

The bill would also see anonymity of whistleblowers ended. Those wishing to make a complaint to the CMC would need to sign a statutory declaration before an investigation can begin.

“Over the years we have seen the CMC used as a political football by the Labor party and what we want to do is stop that from happening,” he told Fairfax Radio 4BC.

Reviewing the bill is the Legal Affairs and Community Safety Committee which is comprised of five LNP MPs, one Labor and one independent MP. In his submission, Fitzgerald suggested that it condemn the bill on the grounds of a “gross abuse of power“.

It’s not the first time Fitzgerald has been outspoken against government decisions. Shortly after Campbell Newman took power in 2012, Fitzgerald gave a speech at the Queensland State Library warning that the LNP was, “putting its own interests ahead of the people who elected the government.”

“Democracy is not served by self-interested politics,” he told the audience.

Over the two-year tenure of the Newman Government, Fitzgerald has continued to hammer home his ‘abuse of power‘ warning. In a recent co-authored piece for ABC’s The Drum, Fitzgerald teamed up with old colleague Gary Crooke QC to write ‘Abuse of power does nothing to protect us’. Referencing the Queensland Government’s populist attempt to crack down on bikie gangs by using anti-association laws, Fitzgerald and Crooke described the plan as, ‘law and order blitzkrieg’.

Gary Crooke QC was senior counsel assisting the Fitzgerald Inquiry (1987-89). In response to comments Newman made in 2013, in which he denigrated the judiciary by describing them as living in “ivory towers”, Crooke gave an interview to ABC 730 Queensland. He explained the link between the Fitzgerald Inquiry and the Newman Government.

“The Fitzgerald Inquiry demonstrated and railed against inappropriate use of executive power. There is a comparison.”

Interviewer Matt Wordsworth put it to Crooke that: “You’re saying that the Premier is guilty of the same abuse of executive power?”

When prompted further by Wordsworth, Crooke eloquently summed up the misunderstanding the Premier had with the separation of powers.

“This ‘ivory tower’ of which he speaks, is the tower that stands between the citizen and the executive government and is the very foundation of our liberty.”

“This ‘ivory tower’ of which he speaks, is the tower that stands between the citizen & the executive government and is the very foundation of our liberty.”
Gary Crooke QC interview with Matt Wordsworth on ABC 730 Queensland.

In Fitzgerald’s latest piece, he criticizes the calculated dismantling of the CMC. He names and addresses both Campbell Newman and Jarrod Bleijie directly, something he has stopped short of doing in previous writings referring to their offices.

“Newman and Bleijie’s conduct also suggests that they are unaware of, or unconcerned by, the principles and responsibilities of good governance and intolerant of dissent and decision-makers whom they can’t control. Both seem to inhabit a political universe which is divided into “us” and “them”, in which those who do not agree with their views or do what they demand are for that reason enemies and legitimate targets for abuse and government retribution. In their brief time in office, they have embarked on unprincipled attacks on courts and the judiciary, which, by virtue of their independence and authority, are obstacles to political excess, and enacted radical, profoundly mistaken laws which were not mentioned prior to the last election, including laws aimed at subordinating the criminal justice system to political interference and a flurry of extreme “law-and-order” legislation.”

The greatest compliment a Queensland Premier can ever have is to never hear from Tony Fitzgerald QC. The state still lives in the shadow of the corruption of the Joh Bjelke-Petersen years and the words of Fitzgerald ring out across Queensland.

Tony Fitzgerald’s full submission to the Legal Affairs and Community Safety Committee on Crime and Misconduct and Other Legislation Amendment Bill 2014.