How we talk about refugees matters: @novidados comments 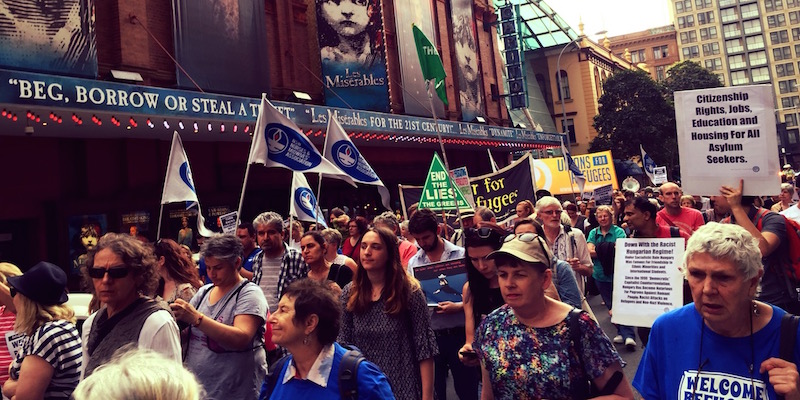 Research associate
Nour writes, translates and makes videos. She is co-researcher on a project about market society and the reshaping of North/South relations.

Nour holds a PhD from UTS (2011) and has worked at UTS, Macquarie Uni and Sydney Uni in teaching and research. She has written for various journals and online forums and makes online videos - an interest that began in 2013 when she was involved as a union member in an industrial campaign.

It has been an extraordinary few days. Last Thursday, Immigration Minister Peter Dutton, speaking in a radio interview, accused refugees being held in Australia’s notorious detention camps of ‘running a racket’ to ‘blackmail’ the government into providing proper medical treatment for pregnant women. The next day, a chartered plane took a pregnant woman back to Nauru to avoid a court injunction. The woman, known by the pseudonym Abyan, had been brought to Australia when it emerged she had been raped and had become pregnant but was unable to have an abortion on Nauru. Only after intense lobbying from refugee advocates was she was brought to Villawood Detention Centre where she was supposed to receive medical and psychological treatment. Four days later, with the phone lines in Malcolm Turnbull’s office flooded with calls demanding that she not be moved, and an impending court hearing, an RAAF jet secretly took her to Honiara en route to Nauru. The next day, the Prime Minister’s office claimed that the woman had ‘changed her mind’ about having an abortion. There is every reason to believe that this is not the case. Statements by her lawyer George Newhouse and from refugee activists who spoke with her before and after, as well as correspondence from the woman herself, provide ample evidence to the contrary.

Commentary, still sparse the day after Dutton’s remarks, is now multiplying. There have been several lines of questioning, among them, the legality of removing the woman from Australia, the parallels between how the state treats terrorism suspects and how it treats refugees, and the deprivation of bodily autonomy and reproductive rights. These analyses draw our attention back to the government’s humanitarian regime. This regime does not protect victims from abuse, but on the contrary deliberately exposes them to it, as demonstrated by material that continues to emerge, including most recently, a Senate select committee report that found conditions in the Australian-run Nauru facility were “not adequate, appropriate or safe for the asylum seekers detained there”, and the account of paediatrician turned whistleblower Dr David Isaacs.

The focus on this systemic abuse is particularly pressing now, as it is leading to another dangerous development. It is shaping the parameters of public speech in ways that are potentially harmful to the victims with whom we want to stand in solidarity.

The woman at the centre of this is in the middle of a terrifying and traumatic personal ordeal, one that is taking place at the same time that the details of her life are being discussed publicly.

Thinking about this for a moment, we might ask, since when does the public need to be informed of a woman’s decision on what she decides regarding her own body? Is it really the Prime Minister’s, or anyone else’s, business whether or not she wants a termination? Why should the public be told whether she has counselling, or whether she has an abortion? And what about the public conversation about her rape while her rapist remains free, and the references to this young woman as a ‘raped refugee’?

Feminist scholars who have written about sexual violence have repeatedly shown how institutionalised forms of power can be mobilised in both subtle and direct ways against the victims of violence so that it is they, and not the perpetrator, that is put on trial. This process of interrogation is no less than a complete violation of the private world of the victim as the intimate details of their life become public knowledge.

The lives of refugees are also governed by multiple institutionalised forms of violence that subject them to bureaucratic tests and public interrogation in order to prove that their claim to asylum is ‘genuine.’ Their lives are treated as public property, as talking points for ethical and political debates.

At the same time they are held in detention camps, black sites where the flow of information is restricted to allow the release of only what the government wants the public to know. And refugees are afforded very few avenues to directly and effectively intervene in any public discussion.

All of this means that the government controls the public narrative about individual refugees, and about refugees as a group. It compiles details of individual lives and turns individuals into examples. This is evident in the paternalistic and inappropriate disclosure of personal details (like whether or not this woman wanted an abortion) to the disparaging labels aimed at refugees as a group (‘running a racket’, ‘blackmail’).

Government ministers, the same ministers who routinely mobilise the power of the state against refugees, continue to treat the intimate details of Abyan’s life as a political game. In the process of denying her proper medical and psychological care, they have placed her at the centre of a public drama that violates her privacy and risks amplifying the power of the humanitarian regime against her by turning her into a symbol, and an object of public scrutiny.

The overall effect of this is to create an ‘exception’ about what is acceptable speech when it comes to talking about refugees. This poses a significant challenge for how we frame public discourse about refugees if we are to avoid reproducing the structure of the state-driven narrative at the same time that we work to refute its content.

Solidarity in the face of this abuse is vital. The campaign to bring Abyan to Australia (now for a second time) has been an absolutely essential part of this. Many, myself included, have signed petitions, attended rallies, messaged, emailed and called various politicians, and shared information about this on social media. These actions are not the only things we can do, but they are an important part of a repertoire of tactics and strategies that we can use, along with divestment, boycotts, stop-works and strikes, occupations, civil disobedience and direct interventions.

Without these collective actions, we risk a complicitous silence with the war being waged against the vulnerable in offshore and onshore camps. But these are the actions of allies. They stand alongside the resistance of refugees at the frontline of this struggle every day.

This fight is far from over. Snap actions and interventions continue to arise in direct response to new developments and demand our complete engagement.

At the same time we must also work against the forms of exceptional speech that have crept into public discourse following several decades of policies and practices that treat living people as political theatre, as much as they use military force to brutalise them. Only then can we begin to break down this regime so that it is refugees themselves, and not the state, that controls the narrative.