I can see clearly now: PM

The Prime Minister has made a bold, perhaps revolutionary decision that has already flummoxed the MSM and will be fascinating to watch play out this election year.

She’s detached herself from the 24 hour news cycle. 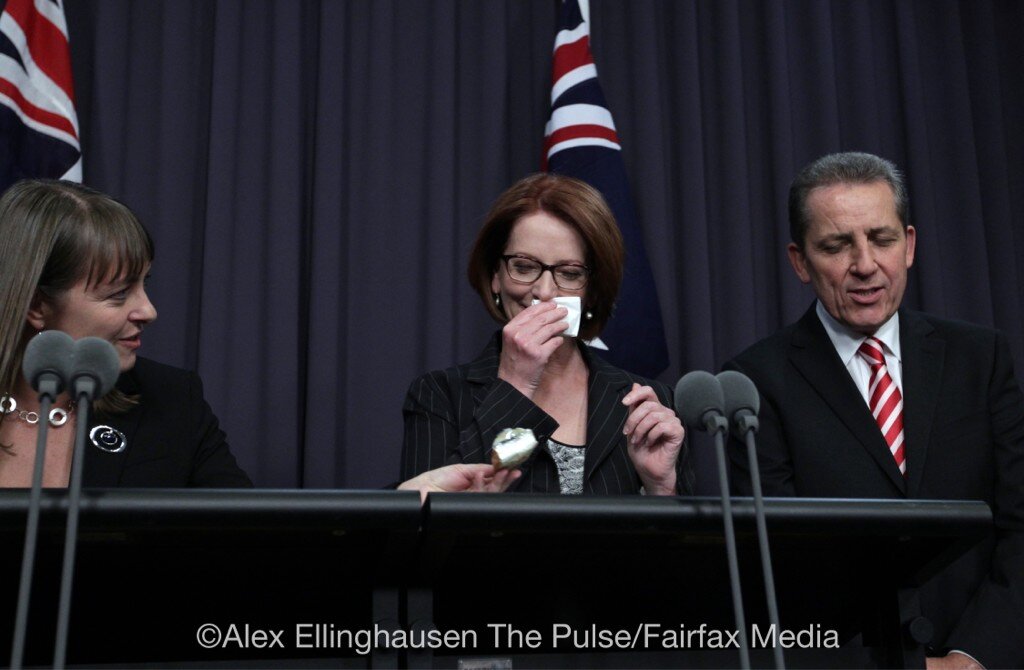 That’s why she looks grounded. Settled. Real. Her stridency has gone. She can even shed a tear in public, as she did today at her farewell press conference to two minister friends.

I reckon she began moving into this new phase of her leadership after the public’s overwhelmingly positive response to her misogyny speech compared so starkly to the Press Gallery’s overwhelmingly negative one. Despite the powerful media forces determined to crush her, lots of Australians hadn’t heard their narrative, or at least hadn’t been smothered by it. They were frustrated too, and their sense of release hearing her speech released her too.

In the two months I’ve been watching politics again I’ve seen her relax into the practical consequences of this moment of clarity. She has begun making public statements on twitter, cutting out the so-called messengers.

She began the year with her controversial captain’s pick, wore the yucky flak, and then made a huge captain’s call by completely freaking out the Press Gallery in her first public set piece. Election date set. Challenge thrown down to Abbott and the MSM to respectively announce and report some stories of substance.

She also chose that moment to begin wearing glasses in public. They symbolise her psychological detachment and her physical shield from the lemming-like ADHD madness of a media in existential crisis.

After the Thomson arrest, she again traumatised the MSM by not rushing in to comment on or spin it. She’d been busy with Bundaberg flood victims, she said, and really, this was a matter for police. Which it is. So they reported she’d ‘deflected questions’ on Thomson, and got their revenge by highlighting smears by George Brandis that night that she had prior notice of the arrest and had timed her election announcement accordingly. His un-interrogated nonsense was big news, her prior categorical denial of foreknowledge buried. 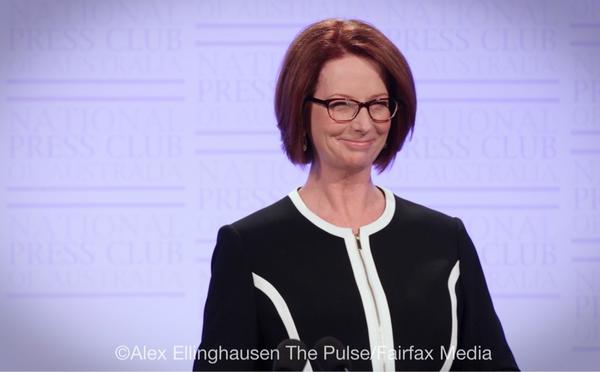 She wore it, and she’ll keep wearing it. And what will the MSM do then? Perhaps even fewer Australians will care.

Did you notice at today’s press conference that she gritted her teeth and set her jaw as the usual inane questions lobbed from journos? Contempt and endurance. And did you notice her wry smile when she said softly:

What I would say about balanced coverage is it ought to bring to the Australian people the facts and the details that they need.

The Australian people are now in the situation where they don’t have to walk into a polling booth wondering.

There is a sufficient time and sufficient space for them to have every detail that they need, every policy detail, every costing detail, and the obligation is on every participant in the 2013 election to put people in that position.

And if they refuse to put people in that position, then I think people will be very, very suspicious why they are refusing.

She’ll keep showing up to Press Gallery press conferences and take all the questions, despite the fact that journos give her no credit for it and fail to protest when Abbott runs a mile from facing hard asks.

She will because she wants to keep proving to Australians that she’s up for it. Unlike Abbott, whose speech to the Press Club was designed to make the media like him, she’s transcended that tawdry goal.

Julia Gillard is going to do this year her way. Yes folks, she’s real and she’s free and she’s talking to us, not them. Weird.