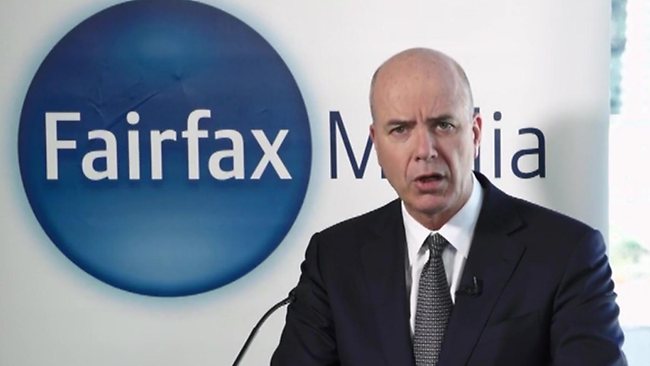 So, it’s finally over. Although it has been coming for a long time, really. What happened last week was just the full stop.

Decades of mismanagement and executive asset stripping now sees Fairfax on its knees, bending to Gina. And there is the real prospect that hard copies of the Sydney Morning Herald and The Age will cease.

It is not on to have one big newspaper group in Australia. Fairfax hasn’t done the job of serious, gutsy competition for years, but at least it was there. Now that Murdoch has just bought the excellent online ‘Business Spectator’, that refuge for top Fairfax business reporters and analysts, that vehicle for getting the truth out about Murdoch is no more.

And where’s the protest at the prospect that he will control Foxtel by buying out Packer’s stake? He nearly got a similar prize in the UK until The Guardian finally broke through on phone hacking.

The challenge is much broader than Murdoch, of course. We’re going to be losing many, many journalists, and that means fewer competitors at the micro level. For example, there will be one film critic across Fairfax. And presumably one environment reporter, etc, etc. That gives enormous power to the few now covering special topics, in one way. In another way, though, it weakens their power, because if the boss puts the kybosh on a story, there’s no risk it will be broken elsewhere.

And with Fairfax, a creature of Gina or at best an online-only tabloid site, the ABC comes under enormous threat. What would an Abbott government do to funding? Think John Howard in 1996. Remember Murdoch lobbied hard in Britain to cut funding to the BBC. Without a well-resourced, strong ABC, there is no scrutiny. Just one agenda setter.

All in all, an awful state of affairs for Australia and our democracy. So what is the solution?

The way I see it, the various independent online media groups need to get together, pool their resources, and step up to become a genuine media alternative to Murdoch and the dregs of Fairfax. Media academics could also be around the table.

It will take real money, and as I’ve long argued, the best model is a trust with sufficient capital to finance a long-term project of creating the new Fairfax. I’d like to see Crikey, the Global Mail, New Matilda, and Online Opinion come together. And the best specialist bloggers need to be under the umbrella.

Personally, I’d like to see the new entity produce, along with a 24-hour website, a daily paper, through an app, and a weekly magazine. Hard copy still matters, for gravitas, and for the status it offers to people who appear in it.

Ideally, a consortium of rich people who believe in quality, independent media would take over Fairfax, so they can have the mastheads. This doesn’t seem viable, given Gina’s interest, so new mastheads need to be created. How about The New Sydney Herald and the New Age Melbourne (joke).

To my mind, the Webdiary model still has a lot to offer as a part of the mix. I haven’t seen anything quite like it yet – I could be wrong, as I’m an internet refugee. The idea was to bring readers into finding and investigating the news, and to write their own pieces. A sense of community is crucial to success in the new venture.

In the same vein, I’m very attracted to Meg Simons’ idea of readers suggesting stories and donating to make them happen. You can review my ideas back then in my March 2006 piece The Webdiary story.

When I took Webdiary independent, a rich man introduced to me by Webdiarist David Eastman suggested a foundation, with several people of wealth making contributions. There would also be sponsors like the Lowy Institute. Tony Fitzgerald agreed to sit on the board and be the ethics supervisor, as a transparent, enforceable code of ethics is fundamental to establishing the trust and authority to make a mark.

Imagine the difference a new media group as described would make to the almost non-existent debate on media regulation. Fresh air, folks.

The time for action is now. Let’s hope the people who can make it happen get together and do it. For all of us.

Margo Kingston is a retired journalist and spent 15 years in the Canberra Press Gallery. View her ABC The Drum profile here.

Read comments to this piece here