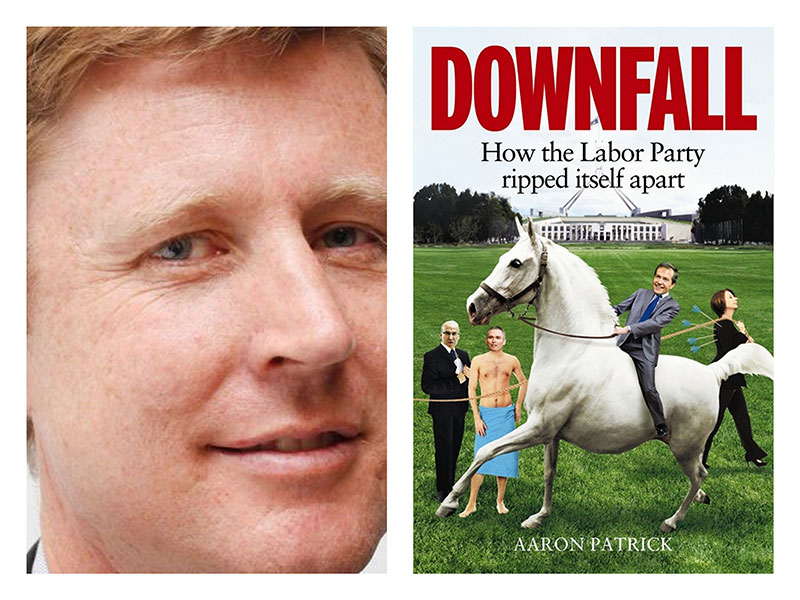 It’s hard to read Aaron Patrick’s Downfall – How the Labor Party ripped itself apart and not make comparisons with the ultimately disappointing The Stalking of Julia Gillard.

Kerry-Anne Walsh’s book canvassed much the same period and will now be turned into a mini-series starring Rachel Griffith – and it’s a shame, because Patrick’s book is the better, and more incisive, read.

Patrick, a Financial Review journalist, brings an intimate knowledge of events to bear, not least because as a former Young Labor activist he was close to new Labor leader Bill Shorten in the early ‘90s.

Written before the Federal election (the postscript describes Rudd’s return after the Gillard interregnum), Downfall is no less relevant now.

Presciently, the early chapters describe the rise of Shorten through the ranks of Victorian Labor. It’s worthwhile reading for an insight into the man who despite having an improbable shot at being our next Prime Minister, will undoubtedly influence how Tony Abbott is remembered as our current one. Interestingly, Abbott and the Liberals are an all but invisible force throughout Downfall. A Labor maxim is that your opponents are in the other party and your enemies are in your own, and this is painfully obvious in Downfall as every self-inflicted scab is opened up.

Patrick focuses not just on the Federal Labor Party, which would on its own have been enough ammunition, but also on the travails of NSW Labor. It’s an intelligent approach, as much of the alleged corruption now before the NSW ICAC had an effect – in moral terms and the public’s view of the ALP at least – on Federal politics.

Moving back and forth between NSW and Federal Labor is a risk. Patrick could very easily have lost his narrative, but the “Labor disease” of swapping leaders in NSW is too important to the travails of Federal Labor to ignore. It was why there was always an uneasiness about the way Gillard took power, and why there was similar unease about reinstalling Rudd when it became clear Gillard was headed for a landslide defeat.

Central to the downfall of NSW Labor are the corruption allegations before ICAC and Patrick gives one of the best explanations of what led to that. He gives himself the space to carefully pick through not just the actual events, but also the decades of factional maneuverings that led to Ministers like Ian MacDonald being in a position to be able to allegedly corruptly influence events.

Pack in the corridors of Federal Power, Patrick gives a dispassionate view of the events of Rudd’s downfall and the Federal election. It was here that the book disappoints slightly. Perhaps because Patrick feels those events have been so widely canvassed, he almost glosses over them. Within a few pages Rudd is out, gives a teary speech and is suddenly Foreign Minister. I write “almost glosses over”, even though Patrick does provide some more detail than I have heard of the night Gillard challenged (and I had personal friends involved that night). But I can’t help wishing that after exhaustive accounts of Shorten’s rise and HSU corruption that Patrick could have spent a little more time on other events. It’s a wish that is not so much because he ignored them (he doesn’t) but that the bar had already been set high.

It’s a well-researched book – certainly not the cut-paste-whinge style of The Stalking of Julia Gillard, which lacked any bibliography or footnotes. Patrick credits his sources and goes to great pains to explain that when he took from a secondary source such as a newspaper article he has done his best to confirm from a primary source, and acknowledges when he does not. It’s not the painstaking research of a Woodward book on the Presidency, but it’s a cut above many other Australian political works.

If anything, the only real letdown is the terrible cover. It makes the book look more like a polemic than the well-researched read it is. Here’s hoping for an update or better still, a sequel that sees Patrick turn his hand to the Liberals rise to power.