LGBTI versus Christians, an unnecessary war: @burgewords comments on #SafeSchools 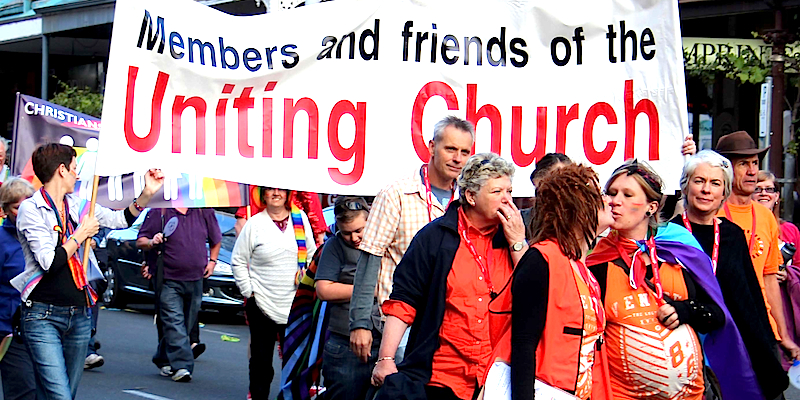 This is not a suffering competition for martyrs, it’s a legislative process taking place in a secular nation.

THE Turnbull government has no firm plans for a public vote on marriage equality. We only know it’ll be ‘after the election’, an Abbott three-word slogan for ‘on the never-never’; and that it will be a non-binding, $160-million-dollar opinion poll that won’t be compulsory for any Australian voter or politician to participate in.

But that doesn’t really matter. While Malcolm Turnbull wasn’t watching, a war cabinet has been plotting against LGBTI dignity from the Coalition backbench, spilling from the party room into the media this week when the Safe Schools program came under attack.

Now is not the time to be under any illusions: Australians in every community are coming under pressure to take a position on whether Lesbian, Gay, Bisexual, Transgender and Intersex people (LGBTI) have the right to equal marriage and if the parliament should attempt to ensure LGBTI children are no longer alienated and bullied at school.

From many right-wing MPs and senators, and at least one on the left, this program generated hate speech that was about as unparliamentary and dishonourable as it gets, from representatives who bear the word ‘honourable’ in their formal titles.

The Safe Schools program was always going to come under unjustifiable attack. Every LGBTI project I have ever been involved with has become a target if it even hinted at the possibility of going anywhere near a school.

God forbid adults who have lived through the profound lack of in-school protection for LGBTIs seek to ensure young people receive a shred of information, before they start learning myths about diversity from those who would seek to indoctrinate their children against us and the LGBTI students and teachers among them.

Yet the multi-party state- and federally-funded program has revealed deep phobias, from the parliament to my neighbourhood and on social media. The reaction has been so strong it’s become hard to pick the real victims. 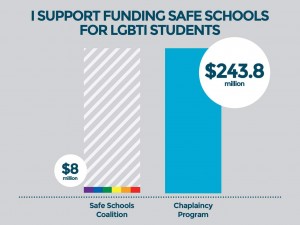 Quite rightly, LGBTI groups cited the National School Chaplaincy Program as meeting every one of the accusations levelled at Safe Schools.

Memes showing the huge disparity between Safe Schools and School Chaplain funding left many people of faith feeling under fire.

I get why – it smarts when you’re made to feel you have to justify your existence.

But this is not a suffering competition for martyrs, it’s a legislative process taking place in a secular nation. While your repression might feel like my oppression, they are certainly far from the same phenomenon, and only one of us is being legislated against.

Whichever citizens can be bothered voting in the never-never plebiscite do not need the distraction of false victims when it comes to exactly who is being oppressed by inequality.

Coming so soon after the Australian Christian Lobby’s call to hit the pause button on anti-discrimination laws so they can hate their way through the marriage equality debate, we’ve woken up in the middle of a war: Christians versus LGBTI.

Bill Shorten called-out Cory Bernardi on his homophobia this week, while Malcolm Turnbull called for measured language, preferring to avoid labelling the hate that dare not speak its name.

I wish it wasn’t happening, I wish our parliament would simply vote on the matter, because in absolving itself of guiding a parliamentary free vote, the Coalition is leading this country to tear itself asunder.

Bringing homophobia and transphobia into the light will be an ugly process for an ugly energy.

The marriage equality plebiscite is already causing damage. The debate has become a base numbers game between LGBTI and Christians, so vociferous so early that many voters will simply stay away.

Once we see yes/no campaigns in communities, such as the small island where I live with my husband among a population of around 600, I predict the Coalition’s plan will cause great division.

Homophobia, in my experience, always polarises between two extremes. There are the unacceptable and illegal gay bashings and overt violence, while at the other end of the spectrum are the silent, insidious processes of exclusion that occur right under the nose and invariably go unchallenged.

Gradually, our friends have started to witness attempts to make us invisible in certain conversations, because it’s noticeable when a homophobe addresses someone we’re standing with, but not us.

When we were new to this place, few were aware of this subtle discrimination, but about a year ago, making new friends brought with it the realisation that some of the so-called ‘great people’ living here, who are also incredibly homophobic, would gradually make themselves apparent to anyone paying attention.

As the plebiscite approaches, all this covert behaviour is being forced into the open. Election campaigns in my part of the world take place on the road, where there’ll be no hiding for anyone.

Bringing homophobia and transphobia into the light will be an ugly process for an ugly energy, and where my husband and I might have flown under the radar in certain quarters of our community, we’ll be outed far more than we realise. It’s already started to happen, and we’ve been on the receiving end of verbal homophobia only a few steps from our front door since the Coalition’s plebiscite plan was announced, after not being the target of anything remotely homophobic for more than a decade.

I have never felt the wish to avoid witnessing my own times, but if I could safely opt out of this era, I probably would. I can’t afford a world cruise until marriage equality is delivered, so it’s time to stand visibly, primarily on the home front.

For a generation of LGBTI on the brink of coming out, this period in Australia’s history has the potential to create a similar level of confusion and despair as the AIDS crisis did for my generation, putting nails in closet doors, not removing them.

For that reason I will participate in a long and relentless yes campaign in my community, unapologetic and vocal. They’ll need to face plenty of questions and cut through some uncomfortable moments, but there is room on the yes team for moderate and progressive Christians and people of other faiths.

The reality of picketing the island’s only polling booth, handing out yes material with a bunch of naysayers across the driveway doesn’t fill me with pride, not yet, but at least the homophobes will be as out as the homosexuals in this community, and when we finally have marriage equality, years from today, we’ll know who to hold hands in front of as a reminder of exactly who the oppressed ones were.

Michael’s book Questionable Deeds: Making a stand for equal love is out now.