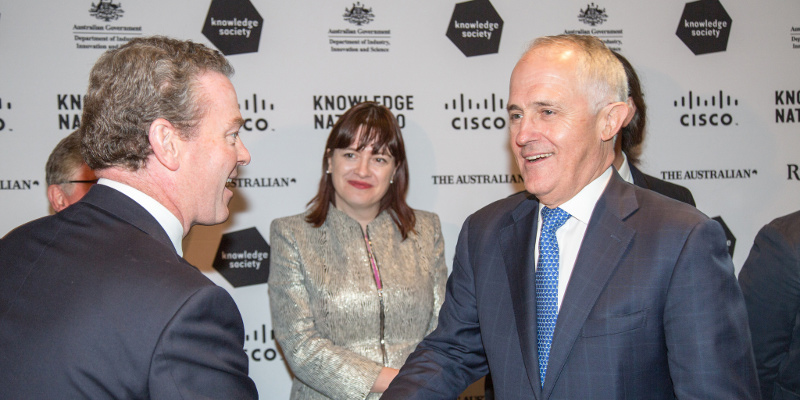 On the opening day of the Paris Climate conference our Prime Minister Malcolm Turnbull, in a stylish but lacklustre speech with few new initiatives, announced support for the Mission Innovation multi-country program to research, develop and commercialise clean energy systems.

“Today Australia joins with many other countries in supporting Mission Innovation which aims to double investment in clean energy innovation over the next five years.” said Turnbull on November 30 at the Leaders Forum in COP21.

“The private sector will lead the way on developing the new technologies that will contribute to a green economy. Businesses will play a vital role in commercialising clean energy breakthroughs.” said Bishop on December 8.

In that same speech Ms Bishop identified that coal “will remain a significant part of the global energy mix” and “critical to promoting prosperity, growing economies, alleviating hunger, for years to come.” This statement by Bishop earned Australia a Fossil of the Day award.

All the while the Abbott/Turnbull Government has had a policy to abolish the Australian Renewable Energy Authority (ARENA) and Clean Energy Finance Corporation (CEFC), both of which have played a prominent financial role in supporting development of renewable energy projects in Australia. They are only still functioning due to the cross-bench support in the Senate.

We haven’t heard anything about Australia’s participation in the Mission Innovation project since those grand statements at Paris in December.

This is an excerpt from the Australian Government blurb from the Mission Innovation website:

“Australia is pleased to join the Mission Innovation initiative and pledges to double government clean energy research and development investment by 2020. This commitment is based on the 2015 figure to be reported to the International Energy Agency for combined research and development into renewable energy, energy storage, fuel cells, smart grids, energy efficiency, nuclear and carbon capture and storage.

“Australia’s governmental expenditure in 2015 (yet to be finalised) is estimated to be around AUD 100 million.

“The Government’s Innovation and Science Agenda outlines how we will transform our approach to innovation and science right across the economy with major new initiatives.”

So when the Minister for Industry and Science had an announcement to make on 24 February, perhaps it was going to be on Mission Innovation and how we would double investment in clean energy and renewables….

But Australia was treated to a real shocking gem by Industry and Science minister Christopher Pyne. Was it an Mission Innovation announcement? Not on your life.

Instead of a major announcement in supporting and boosting clean energy research and development as per the commitment made in Paris to Mission Innovation, Christopher Pyne announced an Oil, Gas and Energy Resources Growth Centre, to be known as National Energy Resources Australia (NERA).

That sounds like a rather backwards move in providing research funding to an industry producing the largest crisis on the planet.

This new centre to promote fossil fuel oil and gas extraction will be funded by $15.4 million over four years. The headquarters will be in Perth co-located with the Western Australian Energy Research Alliance (WAERA) at the Australian Resources Research Centre. WAERA is a partnership between CSIRO, Curtin University and the University of Western Australia. The Growth Centre plans to establish nodes in Adelaide and Brisbane as well.

NERA will be chaired by oil and gas industry executive, Ken Fitzpatrick, with a board and management team drawn from across the fossil fuel industry.

Josh Frydenberg, Minister for Energy, Resources and Northern Australia, said the centre would assist the energy and resources sector for the next wave of investment. No mention of the global structural nature in the decline of coal prices.

Unfortunately, the rush to approve new coal mines or extend existing mines in recent years in Australia has only added to the woes of the Australian coal industry and highlights the long length of time of political lobbying, corruption and mismanagement of coal exploration and approvals.

Even some of our climate scientists saw the irony in the media statement.

@sarahinscience my search engine appears to be broken – It couldnt find the word 'renewables' anywhere. Must be an error in microsoft

@sarahinscience @windjunky I use Linux/chromium and the error is still there. Must be an error with the politics

Neither minister answered why we need to invest in innovation in fossil fuels when the Paris Agreement strongly implies we need to stop further exploration and exploitation so as to decarbonize by mid-century and be investing strongly in clean energy technologies for the transition.

Research published in Nature January 2015 by Ekin and McGlade – The geographical distribution of fossil fuels unused when limiting global warming to 2 °C clearly shows that to meet the higher target of 2 degrees C, then Australia needs to keep in the ground 46 per cent of oil, 51 per cent of gas, and 95 per cent of coal.

If there is commercial Carbon Capture and Storage available (and so far this has proven uneconomic at scale) the figures are slightly better but still involve 37 per cent of oil, 56 per cent of gas and 93 per cent of coal remaining unburnt. See my article from January 2015: 88 percent of Global Fossil Fuel reserves need to remain unburned.

The Paris Agreement targets says “well below 2 degrees” and aspiring to 1.5 degrees, which would imply an even greater amount of Australian fossil fuels need to remain unexploited.

I tried to follow up the Mission Innovation commitment. My google search for “mission innovation” at site:minister.industry.gov.au came up with nada. The mission innovation website has reference links to the pm.gov.au and environment.gov.au domains, so I checked whether there is any mention on those domains. My searches were in vain.

The only link I found was a very lonely one to the Prime Minister’s Paris speech.

It seems that even the Prime Ministers word to the global community no longer carries much weight.

The hopes of many that Turnbull would prove a statesman on the global stage with the climate change issue have been well and truly dashed.

As I surmised in early leadership speculation in February 2015 Turnbull has sold his soul to the rightwing in the Liberal Party on climate change to achieve power.

We get an articulate, suave and debonaire Prime Minister with the same right wing ideological policies as Tony Abbott, that lacks any substantive action on addressing climate change.