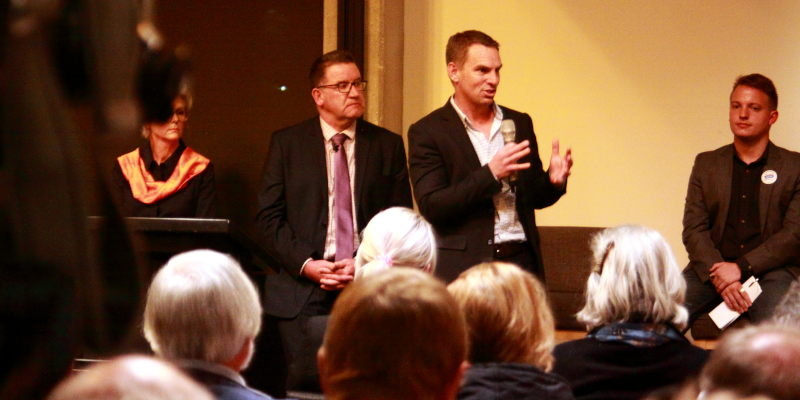 Indi Liberal Party candidate Steve Martin’s belief in the science behind human-induced climate change is in serious doubt after giving a series of conflicting answers to questions on the issue as the federal election approaches.

In February, Martin told ABC Goulburn Murray he believed in the science supporting human-induced climate change, but at a forum in Benalla during April he stated human activity was “most likely” contributing to climate change.

At the same forum in Benalla, Martin also said data — not ideology — should determine our response to climate change.

The Intergovernmental Panel on Climate Change (IPCC) is the United Nations body for assessing the science related to climate change.

Human influence on the climate system is clear, and recent anthropogenic emissions of greenhouse gases are the highest in history. Recent climate changes have had widespread impacts on human and natural systems.

Warming of the climate system is unequivocal, and since the 1950s, many of the observed changes are unprecedented over decades to millennia. The atmosphere and ocean have warmed, the amounts of snow and ice have diminished, and sea level has risen.

The report finds that limiting global warming to 1.5°C would require “rapid and far-reaching” transitions in land, energy, industry, buildings, transport, and cities. Global net human-caused emissions of carbon dioxide (CO2) would need to fall by about 45 percent from 2010 levels by 2030, reaching ‘net zero’ around 2050. This means that any remaining emissions would need to be balanced by removing CO2 from the air.

The next few years are probably the most important in our history.

The IPCC is very clear on the data and science, it is a climate emergency and we must act now.

This week, Martin repeated his statement at a Victorian Farmers Federation (VFF) event that he supports making decisions based on the best available data not ideology, yet added:-

I wish we still had our brown coal stations.

Brown coal is the most inefficient producing the highest emissions.

Brown coal is not as efficient at burning as black coal (because of its high moisture and low carbon content) and therefore it produces up to 30 per cent more greenhouse gas emissions than black coal when used to generate electricity.

Here in Victoria we turned down [coal] and unfortunately we’ve created a lot of instability by reducing 25pc of our power, we had nothing to replace it.

Victoria is part of a national energy market using many different energy sources.

We did not reduce our power by 25pc as Martin said, we reduced our use of brown coal — the highest polluting energy source — by 24pc. Energy production has not declined in Australia.

Energy production rose by 4pc in 2016–17 to 17,957 petajoules, primarily as a result of increased natural gas production. This outweighed a fall in oil and brown coal production.

Martin’s claim that the reduction in brown coal energy production has created instability in the grid is also false.

Coal-fired power station failures, especially during periods of peak energy demand, have been creating both instability in the grid and price spikes for some time now.

In fact, renewable energy sources are helping to stabilise the power grid when coal fire power stations fail and in doing so are putting downwards pressure on power bills.

At the moment batteries are expensive but they cannot provide that baseload response that we need.

Today’s electricity generation technology is so flexible it doesn’t need a ‘baseload’. There is no need to keep huge coal-fired stations ticking over 24/7.

I don’t think it’s sensible to force this historic generation pyramid of baseload thinking onto the market and say, ‘Look, renewable energy can’t supply this baseload.’ I think the argument is more along the lines that the older design is no longer suitable for newer technologies.

The baseload, that is the lowest load on the generators, is met at 4am.

At that time of the day the idea is that the cheap fuel generators, the coal-fired generators, would be ticking over, just meting that minimum demand.

If the demand dropped even more, some of the big generators would have to turn off, which is very inefficient. So there were schemes like off-peak hot water to provide extra load and use the generator power that was available at that time of night.

“Response” is something batteries excel at. In 2017, when Victoria’s Loy Yang power station failed, South Australia’s Tesla battery kicked into action a day before it was due to come online and helped stop the grid failing, helping to save Victoria from power outages.

Even before the Loy Yang A unit had finished tripping, the 100MW/129MWh had responded, injecting 7.3MW into the network to help arrest a slump in frequency that had fallen below 49.80Hertz.

well, the megabattery was one of several sources that filled in the gap left by failure at loy yang.
but yes, we are seeing a lot of massive unit failures at coal stations. more than a dozen in oct/nov.

Asked at the VFF event if he supports new coal-fired power plants being built, Martin said:-

A peaking coal station with the right technology means that we’d have lower emissions with greater stability. So I’m absolutely for new generation that compliments our solar to give us that robust network.

By “the right technology” Martin is referring to so-called ‘clean coal’, which is an extremely deceptive name. There is presently no such thing as clean coal energy generation and possibly never will be.

Martin has repeatedly asserted renewables cannot meet our energy needs by making the point when the sun doesn’t shine solar power doesn’t generate energy, he fails to talk about wind power generation which is a booming sector.

Because I believe in science, adopting what the most likely scenario is, there’s no certainty in science as you know, so I think certainly from the model and we’re talking about a model here, I think it’s most likely that there’s a human contribution that’s impacting climate and therefore I think we should act.

Climate modelling has historically made very accurate predictions about human-induced climate change and their accuracy has increase in more recent times.

More on this graphic:
https://www.carbonbrief.org/analysis-how-well-have-climate-models-projected-global-warming

Denying, spruiking, or both

Questioning the legitimacy of climate change modelling is a device used by climate change deniers and spruikers for the fossil fuel industry to de-legitimise the data underpinning climate science conclusions.

In 2014, then Prime Minister Tony Abbott’s department discussed setting up a taskforce in response to reports in The Australian newspaper that the Bureau of Meteorology (BOM) was “wilfully ignoring evidence that contradicts its own propaganda”. This echoed similar conspiracy theories about data manipulation by The National Aeronautics and Space Administration (NASA).

Not once have I heard Martin refer to the impacts our farmers are feeling now, the ongoing destruction of The Great Barrier Reef, the threat to our tourism resorts in the skifields or any of the other serious and life threatening situations faced by many due to climate change.

A belief in climate science IS mutually exclusive to scepticism about the data and methods used to underpin its conclusions.

By stating a belief in data not ideology (which is an oblique way of questioning its accuracy), questioning the accuracy of climate modelling, suggesting it’s only “most likely humans are contributing” to climate change and lamenting the decline of dirty brown coal in our energy mix, only three conclusions can be drawn with Steve Martin’s position on climate change:-

On climate change once you unpack what Martin says about it, he’s not what he’s pretending to be.

I’m not familiar with or involved with Advance Australia.

After being pressed on the issue:-

Although initially saying he’s not familiar with Advance Australia, he then admits he is familiar with them and doesn’t think they’re hard-right.

Martin denied Advance Australia were funding or helping his campaign in any way.

So Captain GetUp is being sent down to the Victorian electorate of Indi in May. H/T @LMARTI #AusVotes #IndiVotes

I favour traditional marriage, the debate’s done. The will of the people of Australia and Indi was clear, it’s been legislated.

In an ideal world it would be legal and rare, it’s not a great thing the number of abortions we have in Australia. Certainly no-one I’ve been through the process with has found it easy or straightforward and I think it should be something we want to be reduced in Australia.

No, I left because I got a job with a company project managing a $50 million project.

No Fibs:- you’re denying there were bullying accusations and that was the reason you left?

No, there was an accusation that had been made that was investigated and found to be without any case.