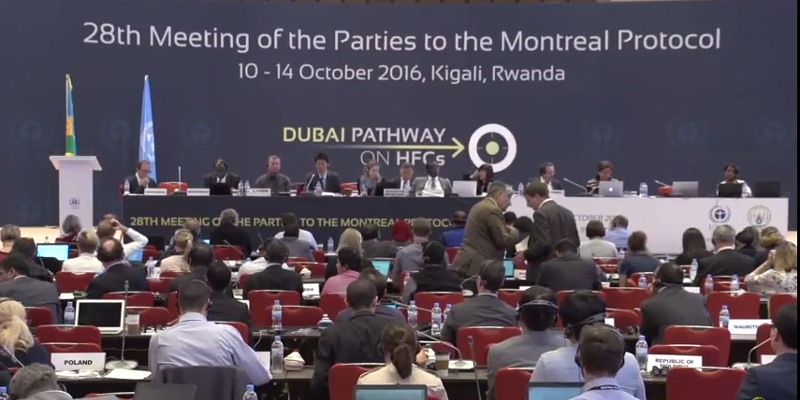 The Paris agreement will enter into force on November 4, 2016 in record time. Never before has an international United Nations Agreement come into force so quickly. But Australia is still to ratify. Unfortunately with the lack of ambitious targets and climate policies Australia is on the outer as theParis Agreement comes alive for Marrakech.

Three days after the Paris Agreement comes into force the UNFCCC climate Conference of the Parties, COP22, will meet in Marrakech to discuss the finer details of the Paris Agreement and how action can be taken further on climate change. This will include encouraging other actors, such as city level and regional governments and businesses, to step up.

In the last two months there has also been significant steps on a global level in two other areas which has maintained the momentum of the Paris moment: aviation emissions and phasedown of HFC greenhouse gases under the Montreal Protocol.

Air travel generates about 2 per centof the world’s greenhouse gas emissions. But flight traffic is soaring so emissions are also set to soar from aviation.

Under business as usual, the sector will take up 27{17ac88c265afb328fa89088ab635a2a63864fdefdd7caa0964376053e8ea14b3} of the 1.5C carbon budget by 2050, according to analysis by researcher Joeri Rogelj for Carbon Brief. Even with extremely optimistic assumptions of aircraft efficiencies and biofuels, aviation emissions will take up 12 per cent of our carbon budget.

Aviation and shipping emissions during COP21 were never mentioned in the Paris Agreement.

In early October this year the International Civil Aviation organisation at their triennial conference finally hammered out a deal to offset aviation emissions for international aviation from 2021. The deal was 7 years in the making but still falls short of a reasonable contribution from aviation to the Paris Agreement targets. But it is baby steps, and those steps should be applauded while encouraging to walk faster.

The new aviation emissions scheme is called the Carbon Offset and Reduction Scheme for International Aviation (CORSIA). The CORSIA offsets scheme is completely voluntary until 2027, doesn’t kick in until 2021, covers just one-quarter of total emissions, and offloads the airlines’ carbon debt onto third parties through “offset credits” of unspecified environmental quality. Airlines participating may pay as little as 3 cents in the US dollar for the climate damages of international flights, according to one recent estimate.

Transport and Environment NGO said the agreement was a weak start which must be followed with more effective measures by states to rein in aviation emissions. T&E aviation director Bill Hemmings said: “Airline claims that flying will now be green are a myth. Taking a plane is the fastest and cheapest way to fry the planet and this deal won’t reduce demand for jet fuel one drop. Instead offsetting aims to cut emissions in other industries.”

Bill Hemmings added: “Today is not mission accomplished for ICAO, Europe or industry. The world needs more than voluntary agreements. Without robust environmental safeguards the offsets won’t cut emissions, leaving us with a deal that amounts to little more than adding the price of a cup of coffee to a ticket.”

Climate scientist Glen Peters highlighted in a tweet that “Offsetting the growth in aviation emissions from 2020 by biomass would require active carbon management an area greater than Belarus by 2040”.

“This dangerous shell game does little more than help airlines hide their rapidly growing threat to our climate,” said Vera Pardee in a media release, a Center for Biological Diversity attorney who has sued the U.S. federal government over aviation emissions. “The world needs less polluting planes, not a dubious offset scheme that just passes off the industry’s exploding carbon debt to someone else. This weak measure puts new pressure on U.S. officials to take stronger steps to curb aviation’s skyrocketing emissions.”

The CORSIA aviation agreement also fails to align aviation emissions reduction with the temperature goals of the Paris Climate Agreement, according to this Climate Home report (UN aviation pact will not be aligned with Paris climate goals).

So baby steps in aviation emissions with much more action required. But at least there is some momentum in this area.

Here is my storify of the ICAO agreement:

Phasedown of HydroFluoroCarbons (HFCs) as part of Montreal Protocol

Also several years in the making, the Montreal Protocol passed a significant change in October, called the Kilgali amendment, to phasedown HydoFlouroCarbons (HFCs). These are largely refrigerant gases which have been developed to replace ozone depleting chemicals such as CFCs. However, they are also strong greenhouses gases. They have a global warming effect up to 15,000 times greater than carbon dioxide and are the fastest growing source of greenhouse gas emissions. There are now alternatives to most of their uses.

The Montreal Protocol, which focussed on elimination or restricting the use of ozone depleting gases, has been one of the most successful international treaties so far. It is a treaty that commits all countries to mandatory mitigation measures and ensures compliance through a robust compliance assistance program, backed up with sanctions. To date, the treaty has phased out nearly 100 similar climate pollutants by nearly 100 per cent.

Passing the Kilgali amendment achieves about 90 percent of the targeted reduction of the phaseout of HFCs. This may save up to 0.5C of warming by 2100, so the action is an effective contribution to global climate action. 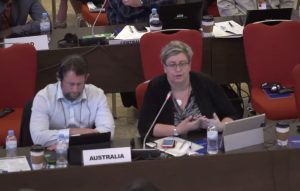 “We came to take a half a degree Celsius out of future warming, and we won about 90{17ac88c265afb328fa89088ab635a2a63864fdefdd7caa0964376053e8ea14b3} of our climate prize,” said Durwood Zaelke, President of the Institute for Governance & Sustainable Development. “The majority of the low-hanging fruit has been picked with this amendment, and we’ll get the rest through market forces,” added Zaelke. “The Montreal Protocol has always catalyzed market transformation faster than the mandated dates for phase-outs. It’s also always been a start and strengthen treaty, and I’m confident in its power to get all the climate mitigation available.”

In the final all night plenary Australian diplomats played an important role building bridges, suggesting compromises, to get this amendment passed. Australia, being a mid-level country which can resource diplomatic entourages, can play an important role in building consensus in these international conferences.

Here is my storify of the Kilgali amendment of the Montreal Protocol:

Much of Marrakech COP22 will be filled with working out the finer details of the Paris Agreement framework. The original idea was that Paris Agreement would not be implemented until 2020 with time to develop all the rules, mechanisms and details. So early entry into force has caught everyone a little by surprise.

Transparency and carbon accounting frameworks will be very important for monitoring and verifying the amounts of carbon emission reductions reported by countries.

Formulating the market mechanism in the Paris Agreement will be another huge task.

Other issues will be the $100 billion per year roadmap of climate finance from 2020.

Loss and Damage and the Capacity building agenda for developing countries will also be issues.

Motivating sub-state actors such as local government and regional government will be important as well as involvement by business in emissions reduction as a business bottom line.

I attended a phone briefing with Australia’s Ambassador for the Environment, Patrick Suckling on Monday. He was relatively upbeat about the conference.

My feeling is that the general mood going into this conference is very constructive, with many nations wanting to engage in the processes.

Of course progress will sometimes seem slow as building the consensus of all parties can be a slow, difficult and demanding process.

There will be Fossils of the Day Awarded, but I hope to also see some Rays of the day for constructive progress in negotiations.

We know the actions on the table with the already registered NDCs aren’t enough, but perhaps the tide is turning. The Moroccan hosts of COP22 are keen for the Marrakech conference to focus on implementation and increase in ambition.

I wait before my flight to Marrakech. I have a certain optimism that the world is acting, but the pace is still too slow if we are to bring our greenhouse gas emissions and the temperature trend under control for a safe future for our children and grandchildren.