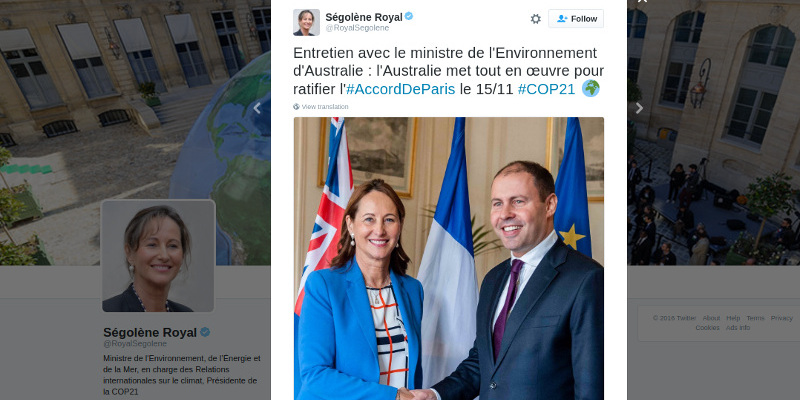 Segolene Royal, France’s minister for the Environment, in tweeting a photo with Josh Frydenberg, appeared to announce when Australia is likely to lodge our Paris Agreement ratification documents.

This translates as: A meeting with the Australian Environment Minister: Australia is making every effort to ratify the #ParisAgreement by 15/11 #COP21

An unusual way to hear about an Australian treaties process and when it is likely to be complete.

15 November is also much earlier than expected for finalisation of this treaty process. The Paris Agreement was only tabled in Federal Parliament on 31 August. It needs to remain tabled for 20 sitting days of both the Senate and the House of Representatives to allow the Joint Standing Committee on Treaties to hold hearings and issue a report advising the government on ratification. 46 submissions have been made on the Paris Agreement treaty.

However, according to one report, the Secretary of JSCOT and the Treaties Secretariat of DFAT, if JSCOT publishes its report before the 20 day period is up, the Executive is free to ratify the treaty.

So Australia might join in time to make an announcement at the COP22 high level segment commencing Tuesday 15 November. That’s the one that Heads of State and ministers will attend. This will also be when the Meeting of parties to the Paris Agreement (CMA1) will be convened.

Separate meetings of the COP, the CMP and the CMA will be held in the afternoons of Thursday, 17 November and Friday, 18 November for consideration and adoption of recommended decisions and conclusions.

@JoshFrydenberg @COP22 Is it true that Australia will try to lodge #ParisAgreement ratification documents by Nov15?

Even if Australia’s ratification documents are lodged by 15 November, Australia would still have only observer status in decisions of the Paris Agreement made at COP22. This is explained at Question 4 of this UN FAQ on CMA1:

“To participate in the proceedings of the CMA as a Party to the Agreement, a Party to the Convention should deposit with the Depositary its instrument of ratification, acceptance, approval or accession at least 30 days in advance of the relevant CMA meeting. This will ensure that the Paris Agreement enters into force for the Party concerned prior to that meeting (see Article 21, paragraph 3, of the Paris Agreement).

“By way of example, to participate in a CMA 1 meeting on Tuesday, 15 November 2016, the Party to the Convention should deposit its instrument at the latest on Friday, 14 October 2016, with entry into force on Sunday, 13 November 2016.

“Also as a further example, to participate in decision-making on the presumed last day of CMA 1 in Marrakech, on Friday, 18 November 2016, an instrument of ratification would need to be deposited at the latest on Wednesday, 19 October 2016.

“Parties to the Convention that deposit their instrument of ratification, acceptance, approval or accession after the relevant deadline may participate and make interventions as observers (see Article 16, paragraph 2, of the Paris Agreement).

So, sorry Josh Frydenberg, sadly Australia has already missed the boat on this one.