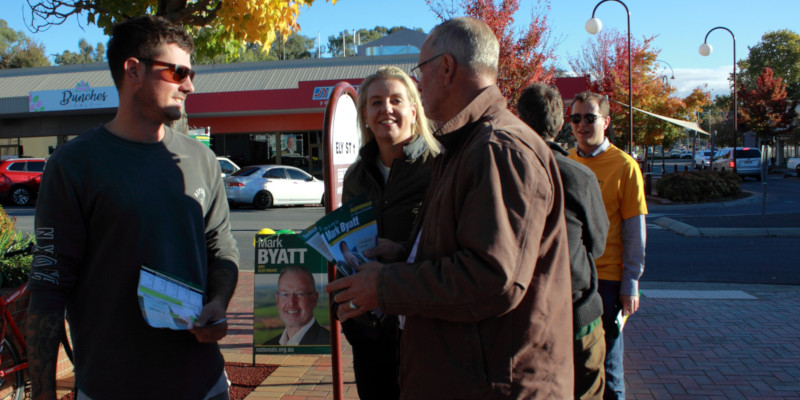 At pre-poll in Wangaratta on Saturday, Senator Bridget McKenzie refused to provide the cost to our economy of not taking swift and decisive action against climate change.

I asked McKenzie what the economic cost of not taking fast action against climate was:-

Bridget McKenzie (BM): Our country set very ambitious emission targets.
No Fibs (Me): But our emissions have risen.
BM: And we’re meeting them.
Me: Our emissions have risen though.
BM: So we made a commitment internationally under the Paris Agreement, a responsible one, and we’re meeting that, that is exactly what out obligation is.
Me [interjection]: I know all that.
BM: We’ve done independent modelling, the independent modelling said over 320,000 Australians will lose their jobs, the average loss of income to.
Me [interjection]: no no no Bridget.
BM: This may not matter to you but it does matter the working class man and woman.
Me [interjection]: It does matter but I’ve heard it, we’ve all heard it.
BM: The average loss of income of $11,000 per annum, right that’s the reality. Now if you want to quibble about the figures I am really happy for Bill and Mark to show us the money.
Me: I’m not wanting to quibble, I’m not asking what Labor is doing. I’m asking you what is the cost to the economy of not acting fast?
BM: No one is wanting to act slowly, right and this is the great hoax of certain players in this election is that the National Party and the Liberal Party don’t care about lowering emissions and aren’t doing anything.
Me [interjection]: But our emissions aren’t going down.
BM: The reality is we’re meeting our international obligations.
Me [interjection]: But our emissions are not going down.
BM: You’d be screaming from the rooftops if we didn’t sign up to Paris — we signed up, we set targets, we’re meeting them and you’re still not happy. Like you know, show us how much it will cost peoples’ jobs, cost to our GDP of those unrealistic and unattainable emissions targets, they will cost and they’ll cost working people their job.

If that means some economic adjustment in order to transition to renewable energy, to reduce emissions… then I’m willing to do that.

There’s real opportunity, but often when we’re embracing opportunity we have to take some short-term pain.

On Monday, eight islanders from four different Torres Strait islands announced they’re making a human rights complaint at the United Nations against the Australian Government for failing to build infrastructure to protect the islands, and to take action to reduce greenhouse gas emissions, which constitutes a clear violation of the islanders’ rights to culture, family and life.

Last week in a landmark moment in the battle against climate change, for first time since the beginning of the industrial revolution, Britain went a week without burning any coal to produce electricity.

Earlier this month the UK Parliament voted approved a motion declaring an environment and climate emergency.

Barrie says the government’s emissions figures say they’re going up. Angus Taylor insists they’re going down. These are the figures. What do you think? #auspol #insiders pic.twitter.com/kE5dtE3W26