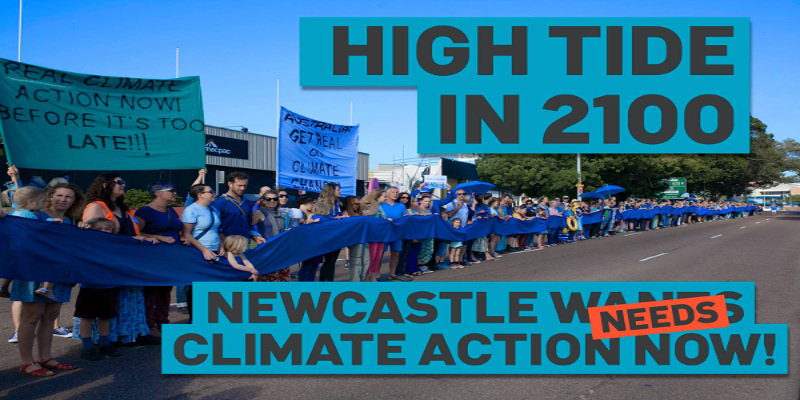 On November 4, residents of Newcastle in the Hunter region of New South Wales celebrated the entry into force of the Paris Agreement. Hundreds of people woke up early and formed a high water tide mark line to indicate where sea level rise may reach by 2100.

“Hundreds of people have come together in Newcastle this morning in response to the governments failure to ratify the Paris Climate Agreement, which comes into force today. The group formed a blue line signifying the predicted high tide for Newcastle in 2100 and are calling on the federal government to ratify the agreement and start phasing out fossil fuels as a matter of urgency.” said the group in a Facebook posting by the Hunter Community Environment Centre.

Newcastle is the world’s largest coal port for exporting coal. Coal that when burnt releases carbon dioxide, other toxic chemicals and particulates, that causes air pollution and adds to the greenhouse effect causing global warming and sea level rise.

See Photos of the action at Facebook photo album.

The Paris Agreement comes into force just 3 days before the UN climate Conference, COP22, being held in Marrakesh. Ratification of the Agreement happened in record time for an international treaty, and provides momentum for the conference.

Read more about what entry into force of the Agreement means at the Conversation:

Prof. Dr. Ottmar Edenhofer, chief economist of the Potsdam Institute for Climate Impact Research (PIK) commented on entry into force of the agreement:

“The entry into force of the Paris Agreement sends a strong message: the world agrees to phase out fossil fuels within our century. However, the real work is starting only now. Countries worldwide need to adopt substantially more stringent emission reduction schemes. If they want to be serious about meeting the target of limiting warming to well below 2 degrees Celsius, they for instance cannot allow any new coal power plant to be built. Pricing carbon is key to incentivize clean innovation, punish CO2 intensive fuels, and in the same time generate revenues that governments urgently need for infrastructure improvements. The science is clear: delaying action would only raise costs. It would do so in terms of Dollars and Euros and Yuan – and even more importantly in terms of human suffering.”

My storify of the event in Newcastle: