Not now, not ever – The Qld Weekly blogazine #qldpol: @Qldaah 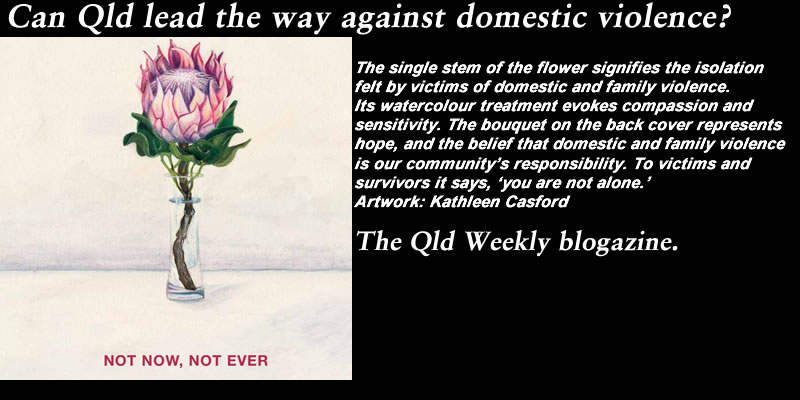 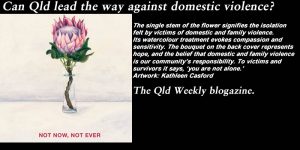 Not now, not ever.

Check back with us as we blog the week in Queensland politics. Former Queensland Governor Quentin Bryce’s report into domestic violence in Queensland, the Queensland LNP hosts International Women’s Day at male only members club and Premier Annastcia Palaszczuk takes up the charge against Prime Minister Tony Abbott ahead of the 2016 federal election campaign.

Not now, Not ever

“Let us together send a message to Queenslanders. Not now, not ever. We must eliminate domestic and family violence,” wrote former Australian Governor-General and former Queensland Governor Quentin Bryce in her report into domestic violence in Queensland. The report was handed by her to Premier Annastcia Palaszczuk on Saturday, February 28, 2015.

On the following Monday night, another suspected murder-suicide was reported at Biddeston, 25 kilometres west of Toowoomba, taking the lives of a 7-year old boy and his pregnant Mum. His Grandfather was also found deceased in their home of suspected self-inflicted gunshot wounds.

Governments don’t seem as effective in responding to the problem as they do to an act of terrorism. Even though domestic violence is happening all around Australia, perhaps it’s because the community can’t see a domestic violence incident happening in the same way they witness a terrorist siege being played out on live television or on the front pages of newspapers.

Bryce’s task group made 140 recommendations, ranging from a community prevention strategy, modifications to the court system, establishing more crisis shelters and greater training for police officers. All recommendations should culminate in amendments to the “Queensland Domestic and Family Violence Protection Act”.

The Queensland Government will now take time to research the report and respond. The trick for Palaszczuk will be to get all parties of the 55th Queensland Government to put politics aside and work together in consultation with the community to implement the recommendations. If not, it will be just another document on top of the growing pile of reports.

The full document is available for public comment here, “Not now, not ever – Putting an end to domestic and family violence in Queensland”. 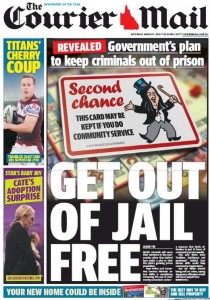 The Courier Mail has sensationalised the piece by its own reporter Jason Tin resulting in a misleading front page, “Get out of jail free”. The “revelation”suggests Premier Annastacia Palaszczuk will let criminals out of jail, a far fetched claim. This misinformation provides no intelligent debate on the issue of overcrowding in Queensland jails. As indicated by ABC’s Matt Wordsworth this week, the number of indigenous prisoners since Campbell Newman came to power in 2012 has surged. Early in his administration, the decision was taken by former Attorney-General Jarrod Bleijie to close the indigenous Murri Court system which allowed offenders to be sentenced but serve time in the community under indigenous elder supervision.

With funding cut to Murri, founding member Uncle Albert Holt warned the Newman Government in 2012 that it would need to build more jails.

“It is absolutely disgraceful for the elders who participated in the Murri Court,” he told The Satellite. “It’s unacceptable the over representation of Aboriginal people in the criminal justice system. We’ve got a lost generation just in our jails. The government didn’t even have the decency to address the issue with the elders and I think that’s abysmal.”

However, Bleijie dismissed the 11 year old system saying, “The Murri Court was not delivering consistent results and did not justify the amount being spent to keep it operating. The program was not reducing imprisonment rates for indigenous offenders and has not stopped recidivism in the short term.”

As Tin pointed out in his article, with there currently being 7192 prisoners in custody, the options for the government are to continue to double up prisoners in cells, have some serve community service for misdemeanors or spend the $1 billion necessary to build new prisons. The latter would take a considerable amount of time to implement.

Hells Angels ride out for first time since VLAD

7 News Brisbane: An LNP function to mark International Women’s Day at an exclusive male only club has been overshadowed by protests.

Amber Austin-Wright reports: New Brisbane research is helping women with a family history of breast cancer make better informed decisions about whether they should get a mastectomy.

"We said that we would not sell assets that deliver the dividend to the Queensland state budget," Deputy Premier @jackietrad says #qldpol

Eastern Busway project back in favour under Labor

MP pay rise will not be implemented

7 News Brisbane: More than 1400 items – including knives, bombs and guns – have been seized in Queensland schools, raising questions about why children are arming themselves in the playground.

TC Marcia – Federal Government called on to do more

Sexual assaults in schools on the rise

7 News Brisbane: Queensland teachers are calling for greater support to deal with problem students after a rise in sexual assaults, attacks and drug offences.

Charges dropped for ‘Not Campbell Newman’

To the gates – Protesting the Abbott Government

Addressing the #March4 rally for workers rights in Brisbane with thousands of Queensland workers. #qldpol pic.twitter.com/O8YJVHNNa2

7 News Brisbane: A Queensland scientist has developed a vaccine which could protect humans against Ebola.

‘Not now, Not ever’ – Breaking down male stereotypes

Year of the goat

Chinese New Year is being celebrated tonight at Parliament House to welcome the Year of the Goat. #qldpol pic.twitter.com/LK8NARcUYD

Welcome @katejonesqld to the Official Opening of our Brisbane Centre with Ambassador Jamie-Lee Lewis pic.twitter.com/XaFpvCv6HA

Lunch with the LNP

On Ken Levy remaining head of CCC 'we're getting some advice there' #9News #qldpol pic.twitter.com/qjChlEkaWn

No specific threat to schools