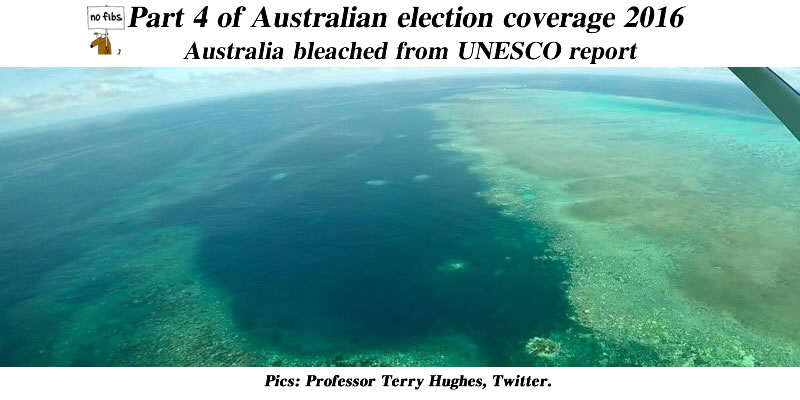 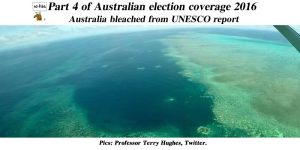 Politics on the Reef.

Carping on with Barnaby.

Donations and the Mob.

Mal’s advice for Bill on Trump

Malcolm Turnbull has lectured Bill Shorten on foreign policy after he described US presidential candidate Donald Trump as ‘barking mad’. However, Turnbull freely expressed his opinion yesterday on Britain remaining in the European Union.

In 2007, Prime Minister John Howard commented on US presidential candidate, Barack Obama, saying, “If I was running al-Qaeda in Iraq, I would put a circle around March 2008 and pray, as many times as possible, for a victory not only for Obama, but also for the Democrats.”

Earlier this year, Howard said he ‘trembles’ at the thought of Trump becoming president and yesterday described described him as ‘unstable’.

Many disputing my view Bill bad calling Trump mad. Needs to act as next PM. Trump could be next Prez & if mad more reason to be discrete.. 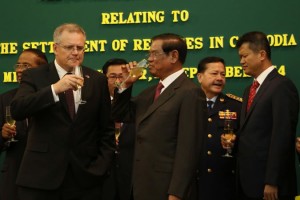 The Cambodia Herald, September 26, 2014: “The MOU (Memorandum of Understanding) was signed between Cambodia’s Deputy Prime Minister and Interior Minister Sar Kheng, and Australia’s Immigration Minister Scott Morrison who is in Cambodia for a two-day visit.”

Government hurdles and obstacles across the country are holding up green energy projects. A campaign is underway to target marginal seats to make politicians take notice.

Labor’s Jamie Clements before the courts

Bumbling Barnaby Joyce has gone a bit too far in making a point on the live animal trade by linking it to asylum seeker boats.

No feasibility study for promises

Millions have been promised for dams across marginal Coalition seats in Queensland without any feasibility studies having been completed.

The Nationals have deleted their "confence" Tweet but we've saved a copy. #ausvotes #nswpol pic.twitter.com/Eb4w83dkXp

ABC political journalist, Eliza Borrello has reported that at this morning’s Rockhampton press conference with Malcolm Turnbull and Barnaby Joyce, the journalists were segregated into regional and national groups. They then took questions from the regionals to avoid questions on Joyce’s increased asylum seeker boats from Indonesia due to the 2011 live export trade suspension. Federal MP for Capricornia, Michelle Landry, can be seen conferring with Joyce behind Turnbull before names of journalists on their right are shouted out above follow up questions.

Mazoe Ford from the ABC’s Vote Compass election coverage team has found that despite the success of foreign investment for Queensland’s cotton farm, Cubbie Station, up to 80 percent of Australians think the Federal Government should restrict foreign ownership.

ABC News 24:l Nova Peris breaks down under media pressure over her decision not to re-contest. 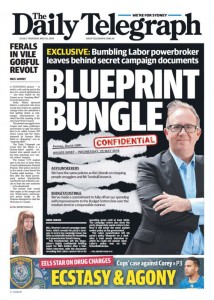 No wonder people across the world think Barnaby is about to explode with his recent performance in the Australian parliament yelling, “carp!” at the Labor Party. The new Deputy Prime Minister also aggressively attacked the opposition during question time by yelling, “disgusting, mud-sucking creatures!” in their direction. Now, in the ongoing saga over his dogs, Johnny Depp has told a US chat show that Joyce looks like he’s been crossed with a tomato and might explode.

In response, Joyce has told the media he is Hannibal Lecter.

ABC News 24: Scott Morrison says what happened yesterday was a house half burnt down.

Mathias Cormann has botched his lines this morning by telling the media that Bill Shorten is what the country needs.

Mal in the Dandenongs

📸 I had to climb halfway up a light pole to get this shot but it was worth it #auspol #ausvotes #steamtrain #steam 🚂 pic.twitter.com/fU89Ao7AkF

OL has morning tea with cancer survivors in Melb, ahead of $8 million pledge to ovarian cancer research #ausvotes pic.twitter.com/4UpSMV7von

There’s a black hole in your black hole, Treasurer

Fact check: you cannot have a black hole in a black hole. But you *can* have Hawking radiation, which cuts mass and energy of black holes.

The chart of death. Is there a black hole in your black hole? Not at all, says @ScottMorrisonMP and @MathiasCormann pic.twitter.com/Tz6fYF3YRI

ScoMo behind the lines

Labor candidate for Brisbane Pat O’Neill has been told by the Department of Defence to take down three billboards of him wearing his army uniform. However, there was no complaint when Liberal candidate Andie Hastie used his army career in the campaign for Canning.

Ten Eyewitness News: No problems for Liberal Andie Hastie but Department of Defence tells Labor’s Pat O’Neill to take it down.

Nova Peris calls it a day

Pauline Hanson has popped up yet again for the election hoping to scrape enough votes together to make the senate. Whether to scare us or inspire, as perennial as the shock-polli herself, the media loves to trot out the story of her comeback at every election. Hanson last contested the 2015 Queensland election as a candidate for the seat of Lockyer.

From 2014, Nick McKenzie, Richard Baker and Royce Millar reported, “The suspected Mafia godfather of Melbourne helped bankroll a Liberal Party marginal federal seat campaign in the 2013 election, raising the prospect that the proceeds of crime have flowed into Liberal coffers.”: Libs take money off Mafia man.

From 2015, William PJ Kulich reported, “McMillan’s Liberal MP Russell Broadbent has said claims made by Fairfax and the ABC that he arranged meetings between Mafia figures and federal ministers are incorrect.”: Broadbent denies Mafia ties.

From 2015, Nick McKenzie, Clay Hichens and  Klaus Toft reported on Amanda Vanstone, Phillip Ruddock and Russell Broadbent in, The Mafia in Australia: Drugs, Murder and Politics. 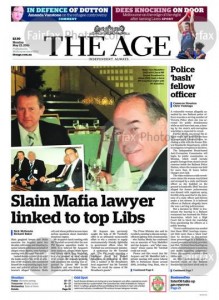 Reporter @QuentinMcDermot goes inside the shadowy world of political #donations next on #4Corners #auspol #ausvotes pic.twitter.com/TIB3LxIlqJ

Sussan Ley frozen at the wheel

Granddaughter of Polish refugees fleeing the Nazis, Queensland Premier Annastacia Palaszczuk has visited her home electorate of Inala with father Henry to respond to Federal Immigration Minister Peter Dutton’s comments that refugees are illiterate, take Australian jobs, live on welfare and use up Medicare. The pair also comment on the recent plan by SBS to film the next season of ‘Struggle Street’ in Inala. Brisbane’s LNP Mayor Graham Quirk has banned SBS from filming on council property which the premier supports.

A photo of younger Annastacia Palaszczuk and Bill Shorten has been released. 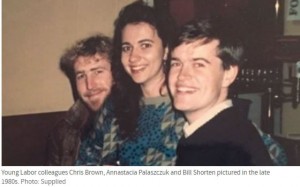 Good to meet Jenny & Carol with Peter Hendy today after announcing upgrades to Merimbula airport & the Port of Eden pic.twitter.com/qxYgI4TR1i