So who is that Corangamite bloke who reckons ‘Tony is a tool’? @PrimMich investigates 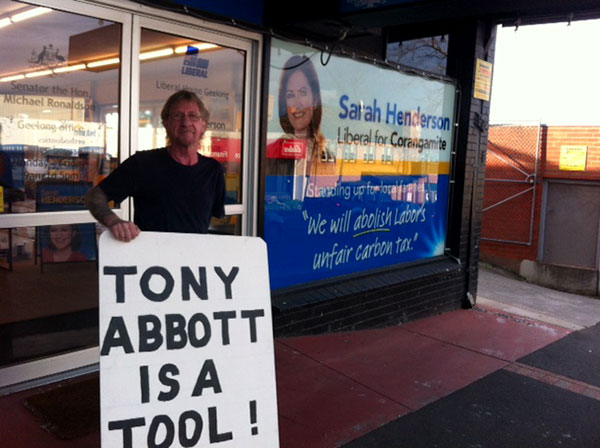 Last weekend I saw an online photograph of a man standing at the Belmont office of Corangamite Liberal Party candidate Sarah Henderson. He was holding a sign that said ‘Tony Abbott is a tool’.

It gave me a laugh, as did seeing the image on Twitter, so when a friend posted the image on Facebook, I asked if the guy was at Henderson’s office right then. Sure enough, he was, so I headed down to have a chat.

Here’s what I discovered about the man behind the sign.

His name is Anthony, he commutes 3 days a week to Melbourne where he works as a forklift driver. He’s also on a part disability pension due to having only one arm, and he has two school-aged children.

For several years he’s been on what he calls the ‘Do not post me Liberal Party propaganda list’, but approximately two months ago, Anthony received Liberal Party campaign material in his letterbox. He returned it to Sarah Henderson’s office and requested that her staff stop sending him Liberal Party ‘rubbish’ in the form of letters and emails.

Anthony promised that if they didn’t stop he would stand out the front of Sarah Henderson’s office with a sign saying ‘Tony Abbott is a tool’.

A week later he received an email asking him to join the Liberal Party. True to his word, he decided to stage his protest.

When we met, I asked if Anthony’s protest was about all political propaganda, but it wasn’t.

I asked what his particular grievance was with the Liberal Party. His reply was: ‘Where do I start?’. He doesn’t like Tony Abbott, his policies and what Anthony calls ‘his lies’.

Anthony said that Sarah Henderson has spoken to him and asked about the issues that concern him. He told me that he expressed how upset he is about the planned abolition of the Schoolkids Bonus, and asked why the Liberal Party were committed to abolishing it. In response, Anthony said Sarah stated that the Schoolkids Bonus goes to the parents, not the school. He was quite upset with that response because he felt there was an assumption that parents would spend the money on poker machines or waste it in some other way.

He was shocked that the Liberal Party could support Baby Bonus payments of $5000 in the past, under John Howard and Peter Costello, but not the Schoolkids Bonus, which Anthony ‘absolutely’ uses to help fund his childrens’ school costs.

He is also quite against the Liberal Paid Parental Leave policy because he didn’t think it fair that ‘rich mothers could receive $75,000 for having a baby’. He also felt the Indonesian ‘boat buy back’ is a ridiculous policy.

Anthony’s protest is peaceful. While we chatted, numerous drivers honked their horns, seemingly in support. Some people gave Anthony the thumbs-up sign.

He knows he has been photographed a lot and feels that the reactions to his activism have been excellent, citing one incident when a Liberal supporter drove past and shouted abuse at him. After Anthony shouted back, the abuser called the police, who turned up and said they had no problem with his protest.

Ordinarily I would think twice about reporting one voter’s thoughts on a politician or political party, but after shadow foreign minister Julie Bishop told a story at the Liberal Party campaign launch on Sunday about a voter protest in Corangamite, I thought Anthony’s alternative protest deserved its share of media attention.

In that incident Julie Bishop observed a man pull down his trousers and bare his bottom to Corangamite sitting Member for the ALP, Darren Cheeseman.

I guess everyone has their own methods of getting their message across.

Anthony, the ‘Tony Abbott is a tool’ sign protester, is passionate about politics and concerned enough to have his say in a public in a non-threatening way.

He proves that democracy is alive and well in Corangamite.